During the game, you will be able to complete several side missions. They aren't too complicated and usually consist of defeating a group of enemies, finding a given item, destroying a vehicle or following a messenger. These missions aren't necessary to complete the game, but by completing them you will gain 100 experience points and get rid of enemy patrols from a given area. You can also complete them to get more out of the game and gain some Trophies. The goals are clearly explained every time you accept a mission, so check out each character with an exclamation mark above the head. Of course the missions are also marked on the map.

Warning: The mission-offering character often engage in fights. While they're on it, they won't be able to give you a mission. You have to clear the area for them to return to their place. 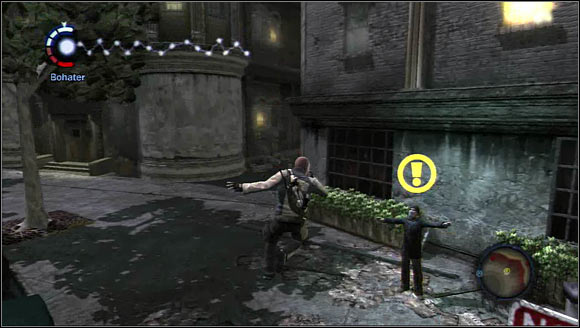 We receive side missions from characters with yellow exclamation marks above their heads.

There are three side mission types in inFamous:

In this mission you have to transport some convicts to the prison located in the Labyrinth. The prisoners will calmly walk in line, but from time to time one of them can try to escape or even attack you. Some lightning will teach him a lesson. Also keep a look out for other gang members trying to break free their comrades.

You have to catch a tall Reaper dressed in white, who's using super powers. Once you bring him down to the ground, you only have to bind him.

You have to find the cop's killers. Just like during the main missions, follow the echo of a running man. It will bring to a place where Reapers are fighting with some cops. Kill the attackers.

There is a parade near the park in the Neon District. You mission is to protect the participants. Once the Reapers show up, keep an eye for the ones with rocket launchers - eliminate them first. Once you get rid of the threat together with the cops, the mission will end successfully.

Some Dustmen managed to get out of their cells, although they still are on the prison's territory. They have taken over one of the roofs. You have to climb the building and take care of all the fugitives.

The Dustmen have taken over one of the buildings in the city. You have to climb it and destroy the ventilation system. If you manage to do that, a big group of enemies will run to the street. There's nothing left but to shoot them.

In this mission you will have to defend a police station together with some cops. Destroying some cars so that you can hide behind them can be very helpful in completing this mission. The mission will end after you eliminate all the enemies.

Fifteen citizens are in need of your help. You have to protect them from enemies on the way to the nearest clinic. However, it will turn out that the hospital has been taken over and the crew killed by the enemy. Lead everyone to the other place showed on the map, while defending from the enemies. Once you get to the destination, the police will take care of the wounded.

A parade against your evil deeds is being organized near the park in the Neon District. Your job is to attack the participants and the cops defending them.

You have been hired to get rid of the man in the picture. He's dressed in yellow and hangs out somewhere on Archer Square. After completing the task, go back to the "employer".

A SWAT team has been sent against you in the Neon District. Kill the whole unit.

The cops have set up a trap. Kill every policeman that you see in the area.

Your task is to get the cop's attention. Start devastating the streets, attack pedestrians and they should arrive shortly. Afterwards your task will be to eliminate all of them.

This mission is very similar to Walk the Dogs. Begin escorting the prisoners to the destination, but instead of giving handing them over to the prison, just murder them after getting to the spot marked on the map.

You have to free some Reapers being held in the prison. Fight your way through the security and go to the room with the generator. Suck out the power and the mission will end.

Night on the Town

You will be invited to two Dustmen gathering places. Kill all the participants and the mission will end.

Execute Sasha's orders and wait for the Dustmen to arrive. Once they show up, kill all of them using the grenades.

Stick It to the Man

Your task is to destroy a police station. Some gang members with super powers will help you out. Get rid of all the defenders to complete the mission.

You will be asked to destroy some surveillance devices attached to a building. Start climbing it and keep an eye for glowing, red bugs. Once you approach a device, burn it by pressing triangle. Check out the minimap which exactly shows the search area - it will be getting smaller and smaller as you find more bugs.

The police station has been attacked. In order to get good Karma points, help the cops. Alternatively, you can just watch as they're getting killed and earn some evil points this way.

A couple of citizens have been kidnapped by the gang members. Go to the destination and get rid of the bodyguards escorting the civilians.

You have to complete some tasks given to you by a local photographer. You can be asked to show one of your powers or kill an enemy in a certain way.

The Reapers have polluted the water intakes on the top of the buildings. This mission is similar to one of the tasks you have to complete during the story. Get rid of the enemies on the roofs and use the Shockwave on the barrels mounted on the water containers. Depending on what Karma points you want to get, you can also destroy the barrels control panel using lightning.

The person asking you to do this job is in possession of information regarding the local gang and as a result, he's being attacked. Quickly get rid of the attackers to complete the mission. The informant must survive.

A tank filled with tar is moving through the city. Of course it's being protected by gang members, who additionally respawn. It's one of the harder side missions; I'd suggest trying to complete it only after getting the Lightning Storm ability.

One of the civilians turns out to be a spy working for the gang. Scan the minimap with the L3 button to find him amongst normal people and kill quickly.

You can help the wounded cops, but not necessarily. Heal them in order to get good Karma points and you will also get 5 Shards. If you want some bad Karma simply attack them and take what's yours yourself.

Get to the medic before he gets killed. You have to quickly kill his guards or else they will have enough time to kill him.

From time to time, you will kill a gang member who will leave behind a side mission. Approach the character and a picture of a package hidden somewhere nearby will appear in your head. Note that the search area is marked on the minimap.

The Dustmen have kidnapped the woman's brother and additionally stolen some shards from him. You can either get him out of Dustmen hands and receive good Karma points or just take the shards and earn some bad points.

Look out, as the man giving you the mission will turn out to be a member of the gang! You will find yourself trapped, surrounded by a big number of enemies. Don't take on this mission until you don't have powerful attacks in your sleeve.

You begin the mission next to a dead civilian. Follow the man's echo, which should lead you to the gang's fortress. There are three powerful Conduits here, hiding between the containers. Find and eliminate them.

The gang has set up an explosive under the police station. Run there and disarm the explosive to get good Karma points. Alternatively, you can just wait and see the action for bad Karma points.

The Reapers have stolen medicine packages from the clinic. Chase and eliminate them, take the packages they were carrying and return them back to where they belong.

The Reapers and the Dustmen are fighting each other. There are lots of enemies around, so it's easy to get hit. Destroy the gas station first. Afterwards, run to the roofs and throw grenades at your foes. If you take on this mission in the later part of the game, the Lightning Storm ability will prove very useful.

Kill the messenger sent by the Reapers. Quickly get on the building's roof and watch the messenger. Once he starts to move, jump down to the platform the train is moving on and keep following him. After some time the messenger will leave the package behind. Wait for him to walk away and take it.

It's identical to one of the story missions. You have to destroy an armoured bus driving around town.

The police needs four live Reapers to get some information out of them.

The Dustmen have kidnapped the man's brother and dressed him up in their own clothes. You will receive a photo of the man that you have to rescue. Go to the marked spot and kill everyone besides him.

It's similar to one of the story missions. Defend the clinic by killing the attackers.

A certain woman thinks she is being observed by invisible enemies. During the conversation it turns out that it's not only her imagination. Kill the three attackers to complete the mission.

This site is not associated with and/or endorsed by the SCEA / SCEE or Sucker Punch. All logos and images are copyrighted by their respective owners.