Diplomacy is one of the main tools in Imperator: Rome. Many of its actions give you a chance to establish various relationships and agreements with other nations.

There is no diplomatic corps in the game and there is no need to send specific characters who will represent your interests. In the diplomacy tab, you can select the country you are interested in to learn its opinion about your nation and choose one of the available diplomatic actions. Many of these actions will cost you a specific amount of Oratory points. Here you can declare war, ask for peace or make an alliance. This mode also allows you to select other countries to see their relations and dependencies. Diplomatic reputation plays a significant role. It can encourage other states to enter into treaties and agree on the proposed terms. It also affects the integration of subordinate states. 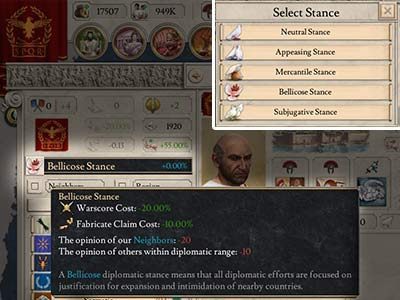 The diplomatic stance icon is displayed in the diplomacy window, right under the nation banner on the left. This is a stance that a nation takes against all governments.

The diplomatic stance is your general attitude to all states. Each stance offers bonuses and has some restrictions. For example, the mercantile stance reduces the cost of creating trade routes, increases revenue from trade and strengthens your reputation among other states. On the other hand, bellicose stance reduces your reputation among the neighboring states but reduces the cost of acquiring rights to the province (fabricate claim) and reduces the cost of the conquered territories which is charged as a result of the war (war score cost). Changing stance requires Oratory points - sometimes, changing your stance is useful when you want to conquer surrounding nations or increase trade. 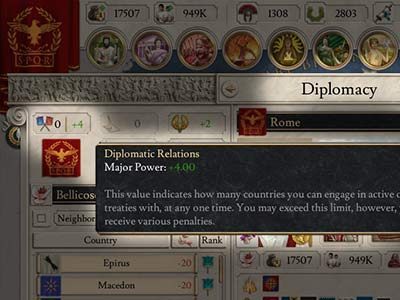 Rome, thanks to its high country rank, can establish 4 diplomatic relations.

Diplomatic relations are a limit that describes how many permanent diplomatic agreements you can have with other nations. This limit includes alliances, vassals and defensive leagues. The higher the country rank, the more relations you can have. A city-state can have 1 relation and Regional Power can have up to 3 relations. You can have more relations than your current limit, but it will increase all expenses that require power points. Some events, laws, trade resources can increase the number of diplomatic relations. This is a very useful factor for each state - more allies or vassals will increase your strength in the political arena. 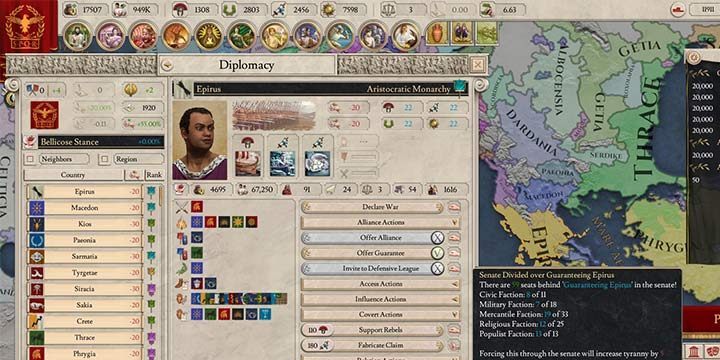 The diplomacy tab gives you access to many treaties, actions, demands, and requests for other States. In the republics, the leader must take the senators' opinion into consideration before making each decision.

The game has many diplomatic options. Over time, you will be able to increase this range. Select the diplomacy tab and click on a state. Once you choose any diplomatic action, you need to wait one in-game month to be able to send another diplomat.

If you want to improve relations with another state, you can try to make friends with their leader, which will also improve the opinion of your nation. 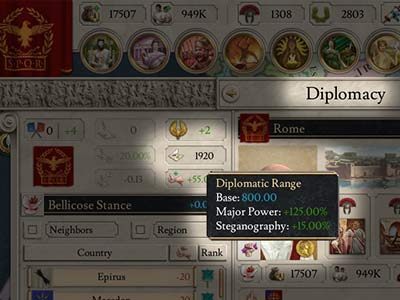 Diplomatic range limits the number of countries you can interact with.

Some of these actions require that the destination state or province be within the Diplomatic range. The higher the state rank, the greater the diplomatic range. You can also simply increase the borders of your state. Diplomacy is a very useful tool in solving problems or preventing various risks. It is also an easy way to increase the power of your state and defend yourself against other powers.

Thoughtful use of diplomacy will allow you to survive and succeed. If you play as a small nation, be sure to create a defensive league against the biggest force nearby. If you play as a powerful nation, watch what happens to your neighbors and use the intervene option to influence the fate of other countries and adjust the outcome of the war to your interests. Many of these actions require Oratory points so make sure you have enough of them and refrain from introducing new laws and assimilating subjects.