National Idea - is a unique way to strengthen a selected area of the state in Imperator: Rome.

National ideas always bring benefits and never cause any state problems in the country. Therefore, it is always necessary to select specified doctrines to strengthen the position in the region. The choice of national ideas largely depends on the form of government. In the nation overview window, you can check how many places you have for national ideas (and also what types of places). Each nation can change national ideas to any preferable idea, taking into account your wishes. This change is worth 50 oratory points. Some forms of government have 2, 3 or 4 slots for ideas.

If you "match" all national ideas, you will receive a special bonus. 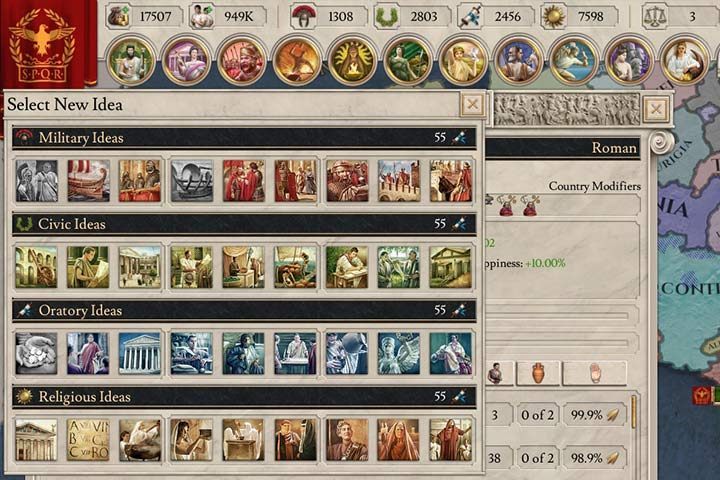 There is a total of 36 national ideas, where each gives different bonuses. Some of them need to be unlocked through technological progress.

There are 4 main groups of national ideas in the game. Each nation has access to the same idea at the beginning of the game. Each of the 4 groups is divided into 3 smaller, specialized subgroups. In the beginning, some ideas are inaccessible (each subgroup has a 2 locked). When you reach level 6 or 12 of technological progress in the selected field, you will be able to unlock subsequent national ideas. All nations have the same ideas to unlock. For some countries there is no special or unique idea. It is necessary to adopt more complex forms of government that will increase the number of national ideas. The more the better. Ideas give only positive bonuses to your nation.

Some ideas are very strong and practical, but only in certain situations. For example, raising the morale of the army can be useful before or during the war. In peacetime, it is better to choose something that will reduce the cost of maintaining troops or limit the drop in experience of cohorts. It is worth to do some planning before choosing some bonuses, such as increased income and cheaper recruitment of cohorts, if you want to prepare for war. If you bet on the development of your cities, choose ideas that reduce the cost of buildings, or increase the power of omens.