Technological progress is one of the main factors when it comes to the development of the state in Imperator: Rome.

The acquisition of new technologies is an automatic process. There is no need in appointing scientists, spending power points or choosing technology. Yes, it is necessary to allocate several characters to monitor the development of this area, but this is not necessary, although scientists are significantly accelerating the progress of new levels of technology. 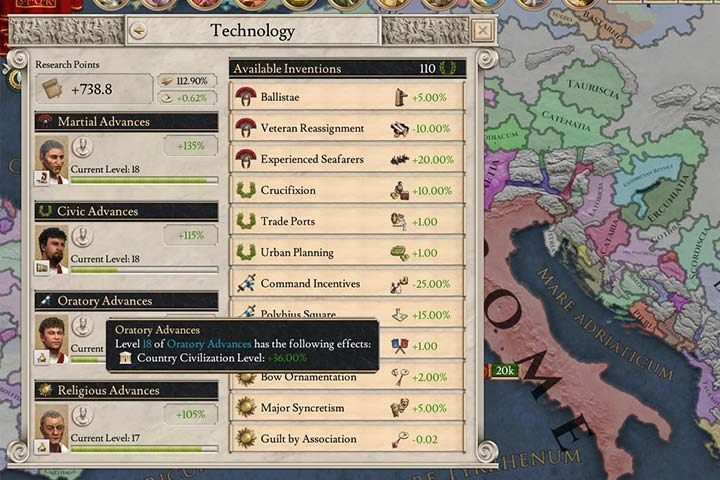 Getting technological advances will increase the capabilities of your state.

There are 4 areas of technology where each provides the same bonus on each level and unlocks 3 new inventions. Below we have prepared a list of technological achievements:

For faster gain of new levels in each field of technology, it is necessary to hire a scientist that has already been mentioned. Each scientist should have as many points of refinement attribute as possible, which will accelerate the work in a particular area. Characters who have a technology position get paid, but don't take much participation in political games.

Remember that in each category, at level 6 and 12 of technology, you will gain access to new national ideas. These will be automatically unlocked for your state, regardless of the form of government.

In addition to the levels and bonuses in each of the areas, your scientists will open the possibility of developing an invention. Inventions are very useful bonuses that are worth buying on a regular basis. They cost 100 civic points where the price is sometimes variable and depends on bonuses, technology, etc. Each area opens 3 inventions. In total, there are 12 inventions to unlock. If you buy out one of the areas, you will be able to buy the next one. You will always see a maximum of 3 inventions from a specific technology area, even if you have developed multiple levels from the same area.

Inventions are special technologies that can be applied in your country. Bonuses are very diverse - additional income from trade or taxes, the power of omens, additional experience for new cohorts, gaining knowledge about the siege (faster acquisition of forts), constant decrease in the tyranny factor, increasing the loyalty of characters or improving the performance of a certain class of residents.

When developing technological achievements, the main thing is to recruit a large number of citizens. This is the only real way to increase the power of your scientists. All disciplines will be developed relatively if you cover all positions of scientists. Inventions are very useful and worth collecting on a regular basis. They give bonus to the happiness of free people or an increase in siege capabilities of your army.