Loyalty is a very important aspect in Imperator: Rome. It has influence on characters in your country, city, province, navy and army.

Almost every area of your state's life where there are people - has a specific loyalty index. In short, the lower the loyalty of people, the greater the chance of accidental and malicious actions of such persons or residents. Loyalty is influenced by a number of different factors, but often a positive level of stability and a low level of tyranny play a significant role. Loyal characters, as a rule, may suggest the occurrence of positive events associated with them.

This party leader has a rather low loyalty and still loses confidence in the current Consul of Rome. While there are a few things that contribute to loyalty, another faction in the Senate and a high level of tyranny do not contribute to Drusus loyalty.

Character loyalty. Each character in the game is described by a loyalty factor. The lower the indicator, the more harmful decisions and actions will be taken by such a figure. Disloyal characters are usually the source of many problems. They often participate in, or are the source of, insurrections and civil wars. Take care of high loyalty level of high-ranking officials, such as governors or generals. You can increase the loyalty of character through the provision of offices, recruitment to warlords, offering gifts or trying to make friends with him/her. You can also develop some news, change laws or national ideas. Such actions will have a positive impact on gaining loyalty.

In Northern Italy, the situation is fine, but begins to deteriorate in many provinces.

Loyalty of the city and the province. All cities on the map are described by the anxiety indicator, which affect the loyalty of the province. The more cities have unrest points, the worse the situation in the province. Unrest (anxiety) are counted from all cities, so it may happen that in one city the situation will be very tense, but several other cities, with a pretty good situation, may increase the loyalty level of the province. With a very low loyalty of the province, you not only lose income, but also cannot train an army in the cities or erect buildings! Provinces with low loyalty often join rebellion or revolts against the legitimate government. Loyalty is also affected by technology, laws, and the Governor. Some decisions and political activities in relation to the province chosen by a Governor may influence the unrest in the cities, for example, religious conversion or autonomy.

In this city, the situation does not look too good, although it could be worse. A special law reduces the confusion caused by the corruption of the Governor and cultural assimilation.

The higher the level of anxiety (unrest), the worse for the residents. Each point of unrest lowers tax and trade revenues, human resources, technology points, and reduces loyalty levels in the province. Some products brought through trade can improve the situation in cities. It is worth increasing the number of routes in the province to increase the surplus and flow of goods. Sometimes there are special events that can affect the unrest, such as the robbery of the city. It is necessary to take care of the province and select the appropriate laws and policies to ensure the loyalty of the city. 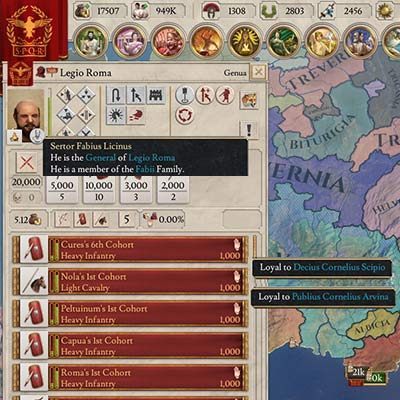 Several cohorts are loyal to General Fabius, but the light cavalry is loyal to Senator Decius, and one of the heavy infantry units is loyal to Publius, who is the leader of the populist faction. This legion could pose a threat to the Republic.

The loyalty of the army and navy. Each cohort has its own level of loyalty. It is not expressed in figures, but only whether the unit is loyal to the government, or to a selected character. Most often, the cohorts will be loyal to their commander - their loyalty increases with each big victory, especially after a successful siege. Loyal cohorts cannot be disbanded or transferred to another army. Their loyalty disappears only if the character dies.

Sometimes cohorts can be loyal to a different person than the commander, often due to certain events or in result of important character or faction. Loyal troops always stand on the side of the leader, for example, armies of mercenaries or a personal cohort of chieftains in tribal governments. Don't let your generals and admirals gain too much popularity, don't give them extra positions and keep an eye on their wealth. Don't use the same army for sieges, but do it with multiple armies. Do not keep all cohorts in the same army, but break such groups into smaller ones. Thanks to that, you will secure yourself in case of riot by soldiers and many cohorts will not move to your competitor's side.