In Imperator: Rome, each region is run by a Governor. Thanks to this solution, your ruler doesn't have to take care of each individual region. On the other hand, a governor who isn't loyal to you can cause your ruler numerous problems.

Each region is run by a governor. Change the map view to see all the regions - the game will mark the borders of all the regions. This view also shows your governors along with various stats such as their loyalty, corruption, and population of their region.

The best way to develop and increase your nation's power is to conquer and expand territories. The larger the state, the more territories you will have under your control. Cities and provinces don't have to be run by people on special posts, but the more regions you have, the more Governor posts you need to fill. The region in which the capital is located will always be managed by the current leader. Every region can be ruled by a governor, even those consisting only of one town. Try to assign people to these posts - they come with numerous benefits.

The province view allows you to not only see the loyalty of your citizens and their population but also to check the policy chosen by their governor.

Governors affect the loyalty of their citizens, profits from that province, civil unrest and trade. Each governor works independently - they decide on the policy of the provinces in their region. Usually, each of these politicians focuses on a specific aspect of your state, e.g. increasing taxes at a cost of rising civil unrest, or providing a trade bonus and additional trade routes. The choice of a governor depends on their characteristics - a devout person has increased chances of Religious Conversion, while a governor with less than 40 loyalty points will focus more on Acquisition of Wealth.

Click on any town that is part of a given province - this gives you the option to change the policy of that province (1) and assign a new governor (2).

You can change the policy of every province but this will cost you Oratory and Tyranny points. Sometimes, this action is necessary when you want to speed up the process of converting people to the religion and culture of your nation. This is also useful when you have to strengthen the forts and borders of a province. Manually select Local Autonomy when you conquer a province with a different culture and religion. Thanks to that, you will lower the civil unrest in that province. 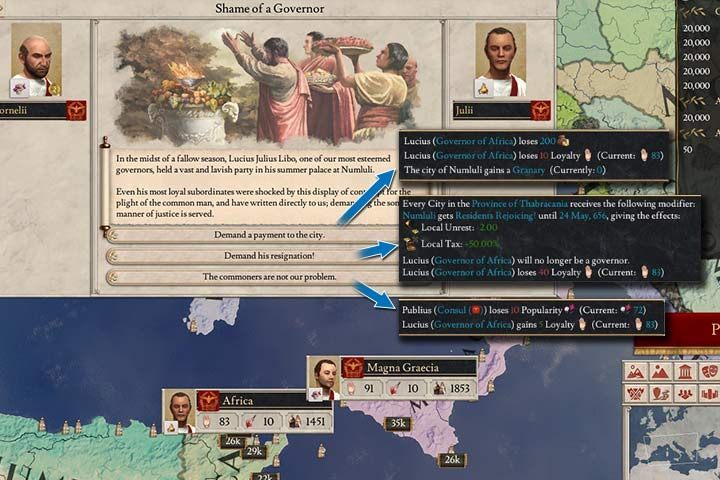 Citizens aren't always happy with their governor. In this example, you can take Lucius's gold to please the citizens and to build a granary. You can also force the governor to resign to please the citizens. If you ignore this case, you lose the popularity but you increase that governor's loyalty.

Each governor receives a salary and has loyalty points. If a governor's loyalty is low, his region will probably be the first one to join the rebels. Low loyalty also blocks the option to change the policy in that province. The corruption level of each governor is displayed in the province view. The higher the corruption level, the more expensive the buildings. You will also have to spend more power points in all towns in that region. From time to time, there will be an event that can give your nation, governor and/or ruler profits but at a cost of increasing corruption level. Also, the higher the corruption level, the more often events related to bribery, fraud, etc. will occur.