Imperator: Rome enables you to build forts in any city to ensure the safety of your citizens and slow down or stop the march of hostile armies.

Forts are unique buildings that you can build directly in cities, just like granaries or markets. Each fort has its own level of walls and garrison. You can increase the fort's defenses by raising the Local Fort Defense, e.g. by importing stones to the province. It takes quite a long time to build a fort, as it takes a few years and consumes space in the province. You can demolish other buildings if you want to build fortifications in a given city. Conquering forts is associated with increased rewards in the form of slaves and captured inhabitants, which affects both your cities and other players. Each state capital has a level one fort, even if it's not physically built. 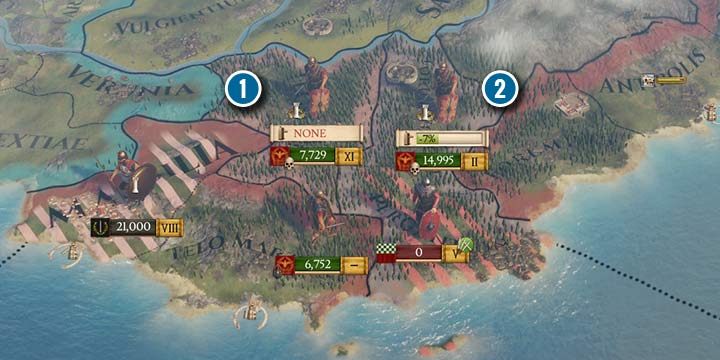 The Romans are besieging two forts: (1) on the left has level two walls, so an army of 7 thousand is to small to lay siege to it. (2) has too many soldiers assigned to the siege of a smaller level 1 fort.

You've got to have a big army to conquer forts. Most often you have to start a siege. For level one, you need a minimum of 5 full Cohorts (5 000 soldiers) to maintain the siege. If this value drops, the army will remain in the city with the fort, but the siege will be lifted. Each fort level requires another 5 000 soldiers to lay a siege. It's always worth having 1 Cohort more than is required, because armies always have problems with exhaustion and attrition.

The forts can be stormed, enabling you to take a city faster. On the other hand, if there are no breachs in the walls, the besieging army will most likely fail. Each siege has its own progress bar, which changes every 20-40 days (depending on the technology, skills of the commander, etc.). Each stage can increase the percentage chance of occupying the fort. This is a measure of how much time is left before the fort falls. 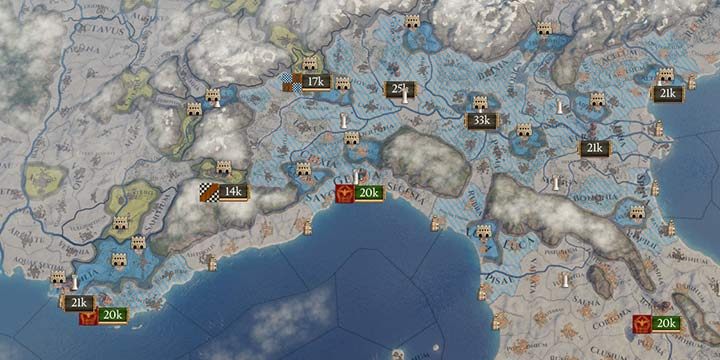 A well-developed network of forts can stop even a big enemy force without major lossess for your economy. Rome has a very good protection from the North duye to its extensive network of fortifications.

Forts maintain control over a given city and surrounding cities. A fort blocks the way for foreign armies. Therefore, the enemy is always required to to take a city that has a fort first. What's more, all surrounding cities are in the control area of the fort. Any army can enter and occupy cities that lead to the fort - they cannot move from city to city adjacent to the fort. This way you block access. The Control Zone not only blocks the movement of enemy troops, but also automatically occupies neighboring cities if they are under enemy control. You don't have to build forts next to each other, but in an interval of 1-2 cities. In this way, you'll create an effective "wall" inside your borders.

Where to build forts and how to use them strategically?

Forts enable you to stop the march of enemy troops and protect your inner territory from enemy conquest and being plundered by the enemy. A well-built network of forts is able to stop most armies for a long time and enable you to organize a defense or move Cohorts from remote regions. Forts provide security for armies that must escape from a distant battlefield. The enemy will not be able to chase such troops, and the army will have time to replenish its losses.