The rank of your nation determines how big of a country you currently have. This way, you can also determine how strong is your enemy, as more cities means more taxes, gold, manpower, as well as strong army and fleet.

The only way of increasing your rank is getting new cities under your control. You can sell cities to nearby nations, but not all of them will want your land. The cities of subject nations are not counted towards to the amount of your cities, needed for leveling up. Every rank offers different bonuses and new options that affect your playstyle. 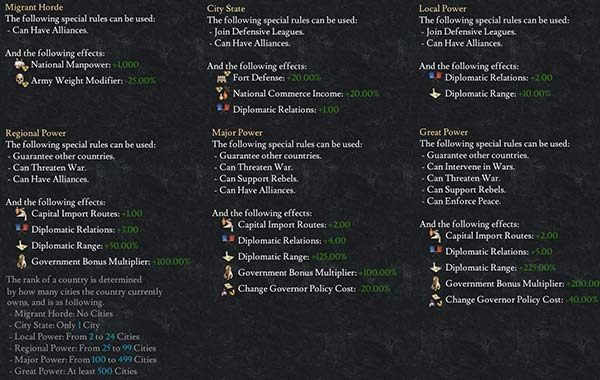 Ranks can help you establish how strong is the given country and unlock special diplomatic actions.

Organized tribes, kingdoms, and republics are divided into:

It is not always recommended to increase the rank of the country. Sometimes, it is better to stay in the current rank, instead of annexing new lands. You can make conquered nations your subjects, instead of capturing new cities and provinces. This way, you'll still get new territories that are under your control, but you'll increase your income and resources without increasing your rank. In the later stages of the game, increasing the rank will be inevitable. Strengthen your country internally (economy, stability, army) and take care of foreign relations before you increase your rank.