In Imperator: Rome, you can recruit several types of military units that can give you an advantage on the battlefield.

To recruit certain types of troops you need strategic resources, without which you're not able to form new units or replenish your losses. Surplus strategic resources will provide bonuses for a given type of military units. Formation of some units is not possible if you do not have a proper military tradition, e.g. barbarian traditions can provide chariots. Often, specific traditions are focused on 1-2 types of military units, so that such units are stronger and fight better. It's worth to create armies based on such units in order to maximize their benefits and bonuses. 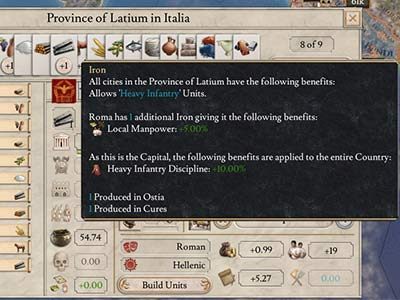 Resource surplus will increase the efficiency of some types of units.

Each nation has the same bonuses and penalties for military units, but some of them have unique modifiers that result from tradition, resource trading or special events. Therefore, whenever you see a particular type of forces, you can expect virtually the same effects as troops of the same type of your nation.

Units differ in terms of cost of recruitment and maintenance. Some of them have different unit weight, e.g. light infantry has -50% and elephants 300%. So, one war elephant unit "weighs" as much as three regular units. This is important to providing supplies for the army. Although your armies may have a similar number of units, an army composed of light infantry will need less supplies and a formation with a large number of war elephants will consume more supply points. Units vary by name depending on the region, but this is a purely cosmetic difference. 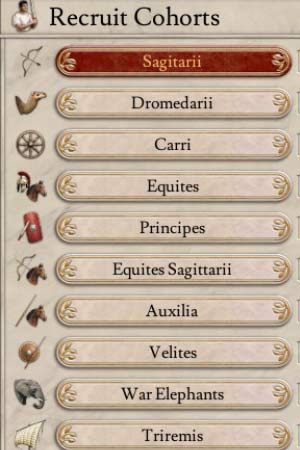 All nations have access to each type of military unit, assuming they have the necessary resources. The names are different for each nation, but it's a cosmetic difference. The screenshot presents Roman units.

Attention: Only archers, light and heavy infantry can take part in the assault on forts, but all units count for the siege.

The right composition of your armies is often the key to victory. Try to match your troops to your tactics. This way, you'll not only get a bigger bonus, but you'll also be able to create an appropriately sized army more easier. It's worthwhile to have a few camps with different types of troops. You can use the following outlines:

Avoid creating large armies composed of a single type of units, e.g. only heavy infantry or only elephants. It may seem like you have a significant advantage over other units if you bet on a single type of units. Unfortunately, all you need to defeat such a force is the right army type, a well-chosen tactic and a decent commander. It is better for your army to have a composition. If you have access to horses, you can add several such Cohorts to each structure of your army. Flanking is a very useful maneuver for any army. This way, you will avoid Pyrrhic victories or numerous defeats.