You can colonize uninhabited terrains or lands controlled by unorganized tribes that didn't form a single political system.

The process of colonizing Thiges required us to bring more citizens from nearby towns. Also, the lands around Thiges had to belong to Rome to be able to colonize it. The new town has 9 citizens, but more importantly, Rome gains access to Elephants!

You can colonize lands that are adjacent to your towns - they can't belong to someone else. Usually, these towns are inhabited by tribesmen although they can sometimes be inhabited by free citizens. Select the town you want to colonize and press "Colonize". This process moves citizens from one of your towns to another. However, colonization has a few special requirements. To colonize land, you have to fulfill a few requirements:

If you meet all of the above conditions, you can click on the "Colonize" button and then select the city from which the colonizer should arrive. From now on the new area is within your power and it will automatically be joined to your state. You don't need to make any additional changes - simply move all the residents to another city. 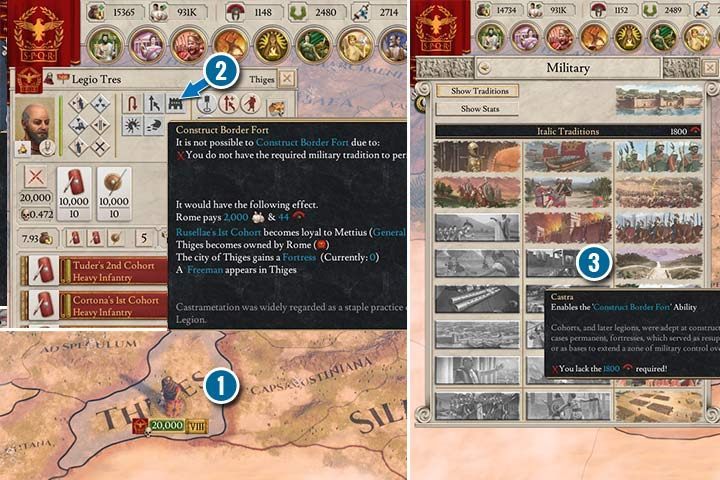 To colonize an independent province (1) by constructing a border fort (2), you need to unlock a special military tradition available only for nations from the Italic group.

You can colonize nearby territories with legions and border forts. First, you have to unlock the fourth military tradition from the central column - Castra. Send an army to the province and select "Construct Border Fort". After that, the province will be part of your state. From now on you will have an impact on the development of this town.

The citizens of the new town become part of your population but they keep their culture identity, social status and religion. This is similar to conquered towns - you need to gain their favor. If necessary, assimilation or religious conversion will be required to reduce unrest in that province.