Macedonia, the homeland of Alexander the Great, is still a major player in the ancient world of the Imperator: Rome. 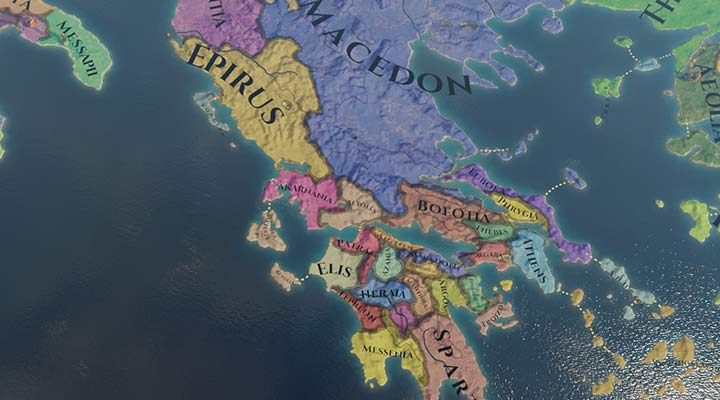 Macedon is not as strong as it was after the fall of Alexander the Great. After all, it still has an advantage over the rest of the city-states of southern Greece. Use this opportunity and conquer them or start alliances with those nations. Kingdoms of Epirus or Thrace will be your main rivals or friends in the initial game period.

Geographically, Macedonia has a very good location. Surrounded by numerous mountain chains you are quite secure. Macedon is located on the seashore, which makes it possible to expand the fleet and provides numerous trade routes. This part of ancient Europe is also very well developed that is represented by a large number of citizens inhabiting these regions as well as a high level of civilization.

The Kingdom of Macedon is right in the middle of a large cauldron. In addition to the aforementioned Thrace and Epirus, you must be careful with the numerous tribes in the North, the growing strength of the Romans, Egypt and Phrygia. Each of these Nations will sooner or later become a problem. It is necessary to form alliances to more easily confront the threat of unwanted wars. Conquering Greece may seem easy, but it will be expensive. City-states often take advantage of protection from other nationalities and are difficult to conquer.

Monarchy is a more stable government than the Republic, though you still need to keep an eye on a few things. Maintain a high level of legitimacy, otherwise there will be many contenders for the throne. Some characters in your state will fight for the crown if they gain popularity. The key is the right balance between loyalty of characters and the number of troops assigned to your generals. This will avoid a bloody riot of your units and troops. Pros (and sometimes disadvantage) of the monarchy is the fact that the ruler reigns until death. If the state is ruled by a king with good statistics, then you will be able to use his bonuses for a very long time.

Development of military traditions will strengthen your troops, especially heavy infantry. This will be very useful for Macedon. Thus, you will be able to create a strong army and resume the conquest. You need to stay aware and look at the composition of the army of neighbors. In the East opponents will often have elephants as units or heavy cavalry, and in the North barbarians and local tribes use numerous groups of cavalry. Systematically expand your cities to increase the population and human resources that will be needed to appoint a larger army.