One of the oldest countries in the world is at your disposal in Imperator: Rome. Egypt has always been an important place for trade, development and different cultures. 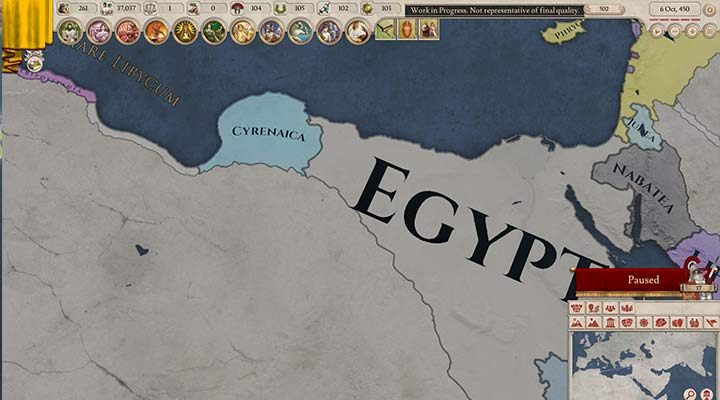 As the ruler of Egypt, you will start the game just after the death of Alexander the Great. Egypt is still a military power with a vast territory. There are many strong opponents around. On the other hand, to the west is a large desert, which blocks the enemies' movement, to the west is the Red Sea, and the easiest direction of expansion is the south. Although that's also where the strong Kushite kingdom is located, it turns out to be a good place to expand your state. The Nile Delta is one of the most populated places in the ancient world. It provides a good foundation for the creation of a great state and a strong economy.

Most areas around Egypt are impassable deserts. Almost all cities are located along the Nile. On the one hand, it facilitates management and defense. On the other hand, it complicates the conquest and narrows the field for maneuver. In the North there is the Nile Delta, which has very fertile land and is one of the most densely populated places in the game. Thus, economic and scientific development will be very easy. You have the opportunity to increase the population of citizens that will affect a large income of research points. Thus, you will get new levels of technological development and unlock new inventions faster. Although Egypt is culturally diverse and the situation is calm, it is worth taking care of stability in the state. You have to slowly start the assimilation process to achieve better bonuses and higher satisfaction of the residents.

Egypt does not have access to the wood at the beginning of the game, which will make it difficult to expand the fleet (maintenance and construction of a large number of ships). Use the remaining resources you have and increase the surplus of this raw material to get extra bonuses. Thus, you will not only increase the population, but also the income from taxes and trade, as well as increase the happiness of your residents. If possible, move slaves to cities where there are valuable strategic resources.

The biggest threat for Egypt would be the state of Ethiopians, which is the only real enemy for the initial period of the game. You can try to make friends with them, but sooner or later the war with this nation will begin. It is necessary to conquer the entire southern part of the Nile river and the surrounding area to have control of this part of the ancient world. These remote provinces will be able to develop quietly most of the time. Most enemies will not have access to this province. Another enemy is Phrygia, which is hiding in Asia and ancient Syria. Be vigilant to their military actions, but it is worth bearing in mind how many enemies Phrygia actually has. Thus, the risk of war can vanish and even open the possibility of conquering their territories.