Imperator: Rome is not an easy game even for advanced players who have had some experience with similar titles. That's why choosing a nation for the first game is not easy. 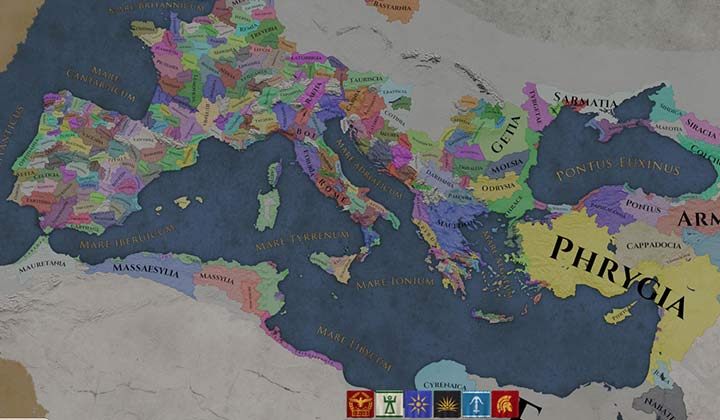 In Imperator: Rome you can choose any nation, from the smallest tribe or city-state, up to the largest kingdoms and empires. Each nation begins the game in a different situation, some are in a state of war, the other ones after a complete defeat, but the majority starts the scenario in peaceful relations with neighbors. At first, it is necessary to check the diplomatic relations of the state with other nations, before you make your final choice. The main screen allows you to select several useful map filters.

The game offers several interesting countries for the first gameplay. Not everything is easy and simple in the game. For example, Selecuid Empire is a large and strong state, which requires a lot of attention and has many threats. In the first game it will be difficult for you to master all aspects of your state. Therefore, the best choice is in a small country, such as Rome, Carthage or Macedon. These are smaller states with good bonuses, geographical location, strong army, etc.

Remember! You can lower the difficulty level on the state selection screen to make the game much easier. The game unlocks special modifiers that will make the game easier for you and make the gameplay more difficult for computer players.

For the first gameplay it's worth selecting Rome, by choosing a tutorial. You will get several special tasks that may reward your efforts as well as strengthen and develop your states. In the tutorial you will receive special bonuses, for example, feedback from other states. This will facilitate the signing of various diplomatic agreements. In addition, Rome has a fairly large population, strong bonuses stemming from tradition and starts the game with access to iron.

You can also choose small states that are isolated from others or have a small number of neighbors, such as tribes on the Islands of Great Britain, one of the countries of Crete or the southern kingdoms of India. A small area is easier to control, and a small number of neighbors will allow more closely monitor foreign policy. Playing a small state, however, is a challenge because you will suffer from a small income and an smaller army. Therefore, a well-thought-out foreign policy is very important.

Moreover, note what type of government the nation has. Gameplay is much different as a Republic, as a Kingdom, or as barbarian tribes. The latter type is particularly complex because it inhibits your technological development and the expansion of your state. Moreover, you should closely follow their tribe leaders. For the first scenario it's best to choose a Kingdom or Republic - you will have less worries.