This page of the guide to Immortals Fenyx Rising contains a map which depicts the locations of all chests, divided into normal, epic, guarded and night chests, within in the region of Clashing Rocks.

In this zone you can find 7 normal chests, 2 guarded chests, one night chest, and 13 epic chests. Normal chests usually contain crystals and fruits/mushrooms, while the more unique chests can yield new weapons and armour, as well as skins for the aforementioned equipment. 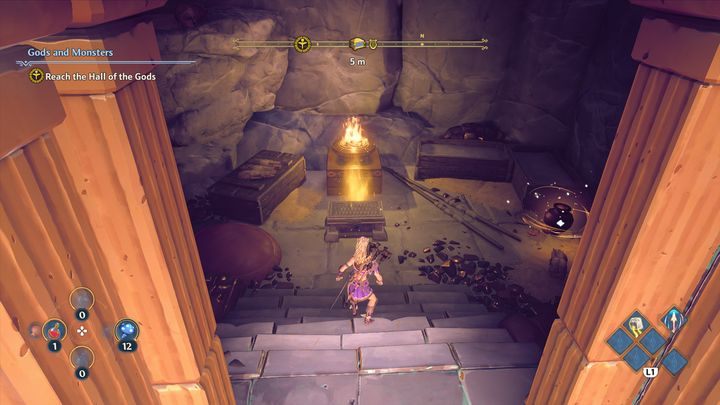 A normal chest can be found in a cave near the water, in the vicinity of the location of a Small Lyre. To get to the chest, you need to unlock three switches, one of them is located by the gate, the second on its other side, you will have to use your underwater diving skills in order to reach it, and the third one can be found around the cliff on the right.

The chest is located in the water, next to a sunken building. Use stamina potions in order to keep your character alive underwater. The sunken building can be found near a rock which resembles a huge turtle.

This chest has been placed at the very top of the rock which resembles a turtle. If you are having trouble reaching the top, use stamina potions.

There is a shipwreck in the vicinity of the location of the first normal chest. You will find a chest on top of the wreckage.

This location is close to the place where you started your adventure with Immortals. Head southwest, you will see a shipwreck there. At the top there is a cave, the entrance to which is blocked by a cracked wall. Hit it with your axe and go inside.

This location can be found in the southern parts of the region. You will find an abandoned village there, which is protected by chickens. Defeat them, then enter the destroyed building, where you will find a chest.

This chest can be found on a small island, in the southernmost parts of the Clashing Rocks. You will find it inside a shipwreck that is located there.

The chest in question is guarded by purple enemies. These foes are very difficult to defeat, especially at the very beginning of the game. You should only attempt to obtain this chest after you have sufficiently improved your main character, or if you are a very proficient fighter. Nevertheless, after defeating the aforementioned opponents, you will find a new axe in the chest.

This location is guarded by one of the larger Griffins. The fight will take place mainly in midair, so it is a good idea to invest in air attacks or parrying beforehand.

The night chest, as the name suggests, can only be obtained at night. This particular chest is guarded by warriors and harpies. It is best to deal with the warriors quickly, this will allow you to fight against the airborne harpies with relative ease. 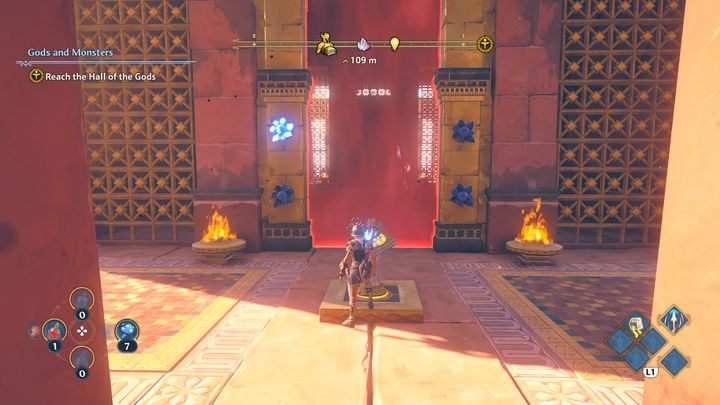 To get inside the temple and reach the chest, you must first find four crystal switches. The first one is located right in front of the entrance to the temple. 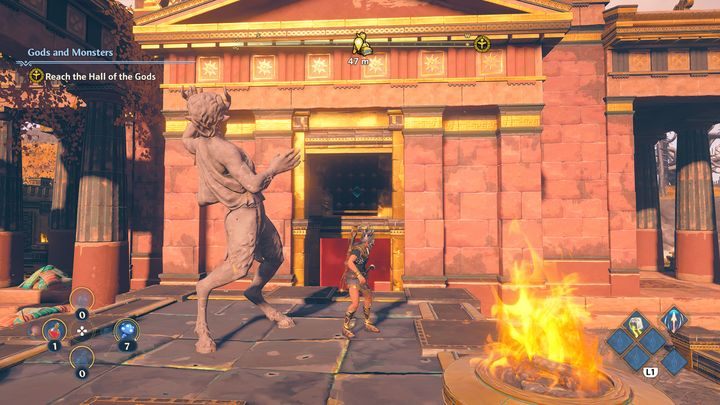 On the left side there is a statue, and there are several stones next to it. Pick up a stone and then throw it at a point above the red barrier. There is a cracked wall there, blocking access to a target. After the wall is destroyed, shoot an Arrow of Apollo at the target, which will cause the red barrier to disappear. Inside you will find the second switch. 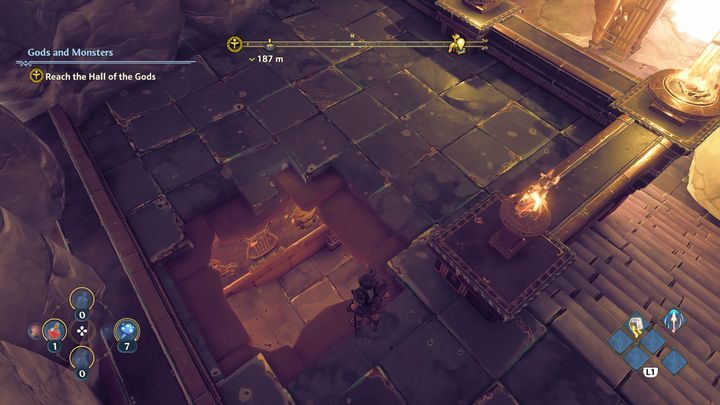 On the right side of the temple, there is a large tree, with a blocked torch on top of it. Go towards the tree, there is an entrance to a cave very close to it. Enter the cave, then go up the stairs and jump down through the hole in the ceiling. 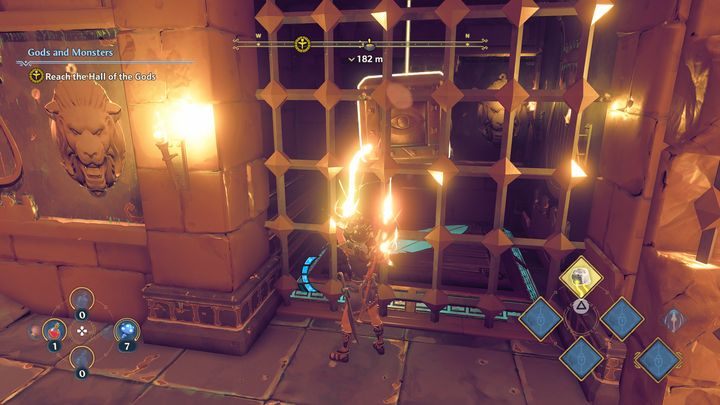 While you are down there, use the Godly Power of Heracles' Strength to lift the block, and then lower it onto the pressure plate. This will cause the red barrier to disappear. Afterwards, you need to fire an Arrow of Apollo into a nearby fire and then guide it towards the torch on the tree. Once you have done that, you can go ahead and use the switch. 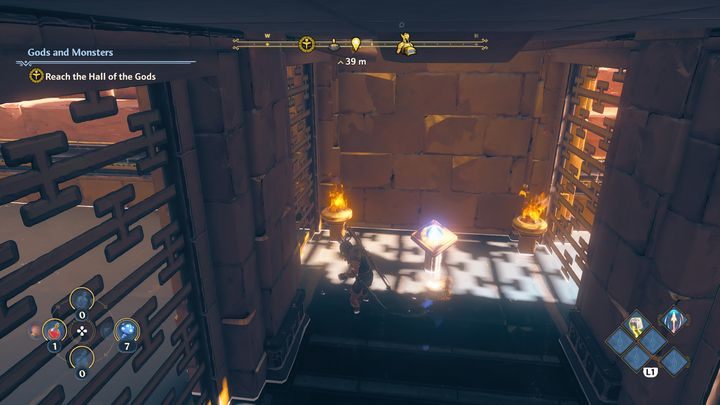 The final switch is located on the other side of the temple. At the top, near the pillars, you will find another block; pick it up and put it on the pressure plate with a feather symbol. The red barrier should be gone now. Once all of this is done, go inside, then dive into the water; there, you will find the fourth and the final switch. Return to the main entrance to the temple. 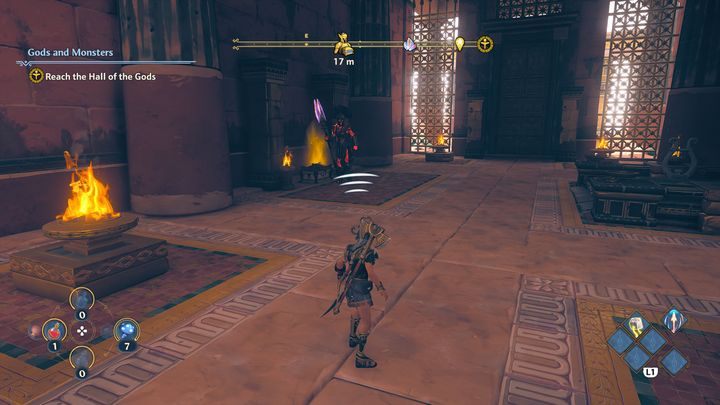 Inside you will encounter one of the more powerful opponents, beware of his attacks, he will also be aided by other nearby opponents. Attacking him with an axe will be the most effective. Once you have defeated him, you will find a chest and a Small Lyre in the room. The chest contains an armour piece, namely the Skin of the Revels. 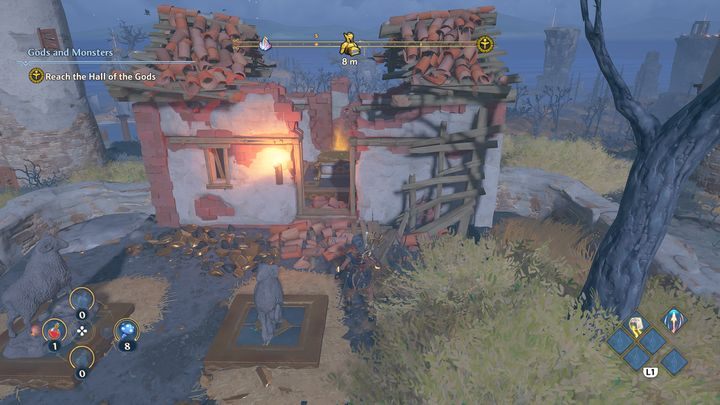 The chest is located in one of the destroyed buildings. In order to unlock the chest, you must first place the two missing sheep statues on their respective platforms. One of the sheep is located on a nearby rock, while the other is near the tower of the granary. 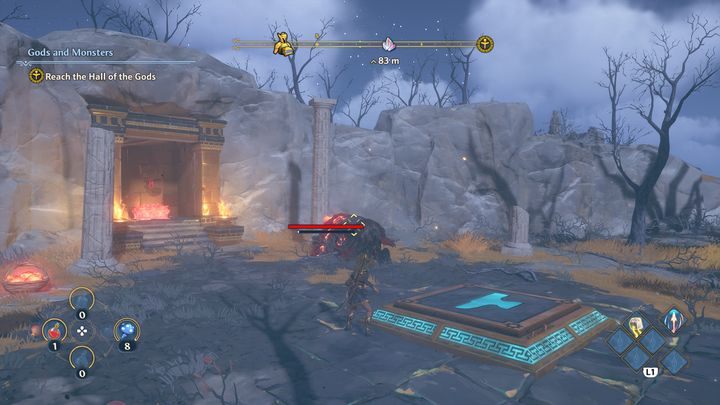 In this case, there are no tricky puzzles for you to solve; you simply need to place the destroyed pillar on the platform to unlock the chest. The main challenge here will be the opponent that you will have to face, one that closely resembles a minotaur. You have to defeat him in order to get the chest; the best option is to sneak up behind him and then perform a sneak attack. Make use of the pillars that deal great damage if you can throw them at your opponent.

The chest is located underwater, in a location where you will see the head of a statue. Dive down, you will find a switch next to the legs of the statue. Use it, then open the chest and float to the surface.

This unusual chest appears at random, and it can also turn up at a completely different location. It usually appears after expending a certain amount of grenades and after fast travelling to the Hall of the Gods.

Epic chest - the top of the Observatory [6] 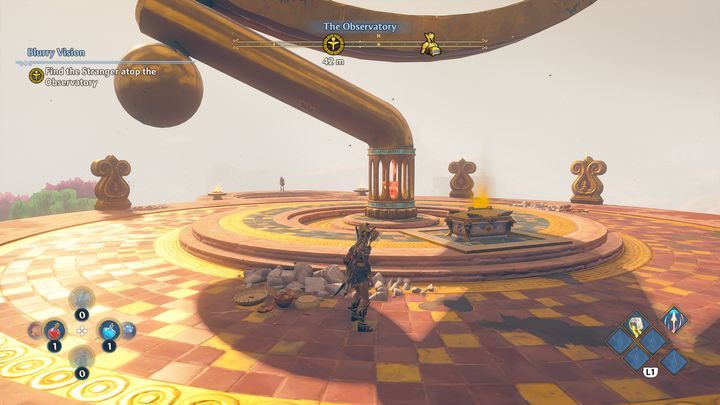 This chest is located at the very top of the Observatory. You do not need a lot of stamina for this task, since you do not have to climb, only follow the path to the top. You will get a new armour piece as a reward.

On the lower level of the Observatory, there are three pressure plates with feather symbols. You must simply put some light objects on these plates. This will remove the red barrier; after that is done, you can go inside and open the chest. Your reward will be a new mask.

Go to the lowest level of the Observatory; there is a cave there, near to the water. Go inside, then destroy the wall on the right side with an axe. Go through the ruined wall, then use the double jump in order to get to the higher level through a hole in the ceiling. Once there, slide a block towards the hole and then place the block on a pressure plate to unlock the chest. 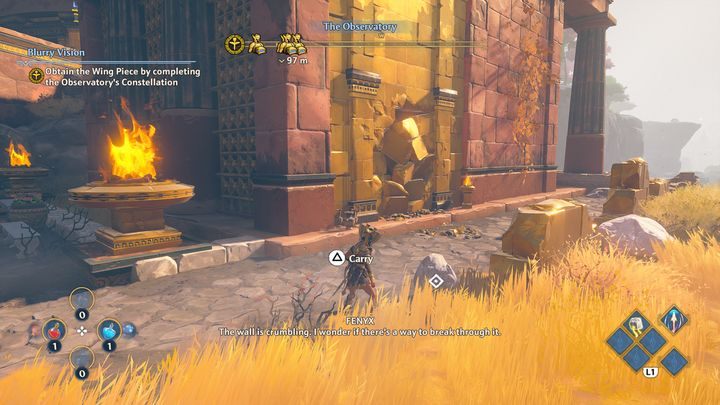 On the lower level of the Observatory, near the Myth Challenge, there is a ruined, golden wall. Hit the wall with an axe or throw a rock at it, then go inside. Once there, stand on the pressure plate, and then use an Arrow of Apollo to hit the torch, while paying attention to avoid the bars; direct the arrow to the next torch, which is located in the centre of the Observatory. Once you have accomplished that, you will be able to open the chest, and you will find a new helmet inside.

Go to the location indicated on the map above, the cave is located very close to the water. Swim towards the cave. At some point you will see a pressure pad with a forge symbol. You will need two blocks for this pad, one of them can be found underwater, use Heracles' Strength and place the block on the switch. The other one is located next to the blue mushrooms, behind the grate. Use the Godly Power of Heracles' Strength again. Drop the block into the hole, then place the two blocks on the pressure plate. This will unlock the chest. Inside you will find an armour skin.

Epic chest - inside the mountain [11]

The chest is located inside of a mountain, to get there, you will need the Wings of Daedalus and stamina potions. Once inside, you will find a pressure plate with a forge symbol. Once more, you will need to put two blocks on the pressure plate in order to progress further. They are located on the left and right side. The one on the left is barely visible because it is located on a pillar; use Heracles' Strength in order to reach it. The second block, the one on the right, is located behind a ruined wall; destroy it with an axe attack while in midair and then drop the block onto the switch. Inside the chest you will find a helmet skin.

You will find a shipwreck of a wooden vessel on one of the mountains in the area. There is a riddle to be solved here; however, it is very straightforward. Go to the location indicated on the map above, you will find one a block there. Put it on the pressure plate with a feather symbol and open the chest. You will be rewarded with another helmet skin.

Go to the location indicated on the map above, reach the top of the mountain. Once you are there, place your character on the switch with a soldier's helmet symbol. Your task will be to launch an Arrow of Apollo towards a nearby target. The issue is, that the red barrier in front of the target makes this a bit more tricky. First, you need to guide the arrow down, and when you manage to direct it into the structure below, bring it up quickly and hit the target. The skill which lets you control the speed of Apollo's Arrows will be extremely useful here.