This page of our guide to Humankind describes the stability, which has a big impact on your cities.

Stability is a unique factor calculated separately for each city. High stability ensures a peaceful population growth and has a positive impact on its development. Low stability hinders the expansion of the city, the training of troops and leads to riots and revolution.

This factor is presented as a percentage and varies according to the different effects affecting the cities. Every object, district, religion, ideology, law, decision in a random event affects the stability of the city. The sum of these points translates into overall stability in the city. Proper planning for the expansion of the city and the construction of districts, sticking to internal politics and the right choices in random events, can help keep your cities in check.

The impact of stability on the city

Although stability points are collected separately for positive and negative effects, their distribution is a percentage. However, stability will not fall or rise to an extreme level within one turn. There will not be a situation when the stability will fall from 100% to 0% in one round). If the negative stability points are greater than the positive ones, then in each round, the stability value will change by 5% until its level reaches the appropriate ceiling. That is, the change of stability from 100% to 0% will take up to 20 rounds. This is the time to counteract! Change the situation in the city by building new districts, changing the rules, ideology or simply deploy a larger army.

Each percentage threshold provides certain bonuses or penalties for the city. Below are the effects of each stability level:

The morale of a city can change in many ways. In addition to random events, stability is affected by certain actions that depend directly on the player. Changes in ideology are also important. Each category, if it is in the middle, adds 10 stability points. There are 4 categories, so you are guaranteed 40 points of stability in the city. Moving away from a neutral position reduces stability by 5 points in each category. In addition, the stability is affected by the level of difficulty in the game. The lower the difficulty, the greater the bonus all your cities have. 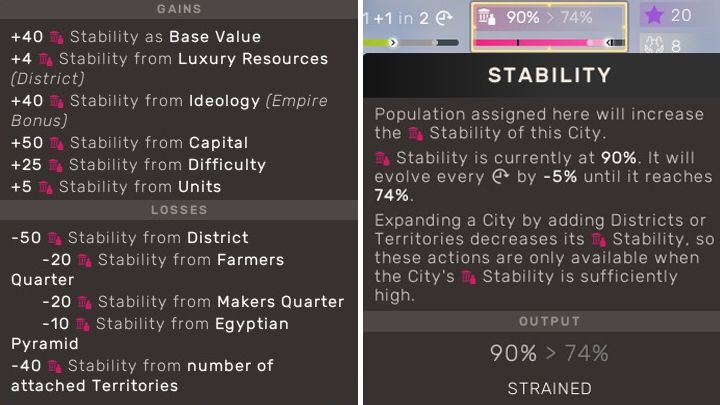 The city has a good level of stability. However, over the next few rounds, it will start to fall. This can be seen from the sum of the positive effects (164) minus the negative stability points from the districts and adjacent territories (-90), which in the end will reach the level of 74%.

Stability in the city can change the following factors, on which you have a direct impact: