This page of our guide to Humankind describes the population and the possibility of making them specialists in the city.

Unlike many strategy games, here, a city can have no population! Even without residents, it will work like any other city. This is important information because cities use population differently than in many similar games. The main way to collect income is not to send your people to work, but to build districts. Especially the emblematic districts can collect really big revenues in FIMS. The city inhabitant is a kind of resource, which is also more flexible in collecting basic resources.

The population serves two purposes: it is necessary for the training of new military units and can be assigned as specialists in the city. In addition, each population unit brings income in the form of influence points, if stability is at a high level. Some technologies offer additional bonuses, such as science points for each inhabitant in your empire.

Low stability level causes riots and the residents may flight from the city!

There are 4 types of specialists who are responsible for the production of each of the basic resource: food, industry, money and science. Some districts, technologies or Infrastructure projects can increase the limit of work in a given category of FIMS or increase the generated income of their work. Specialists always provide only one type of resources. 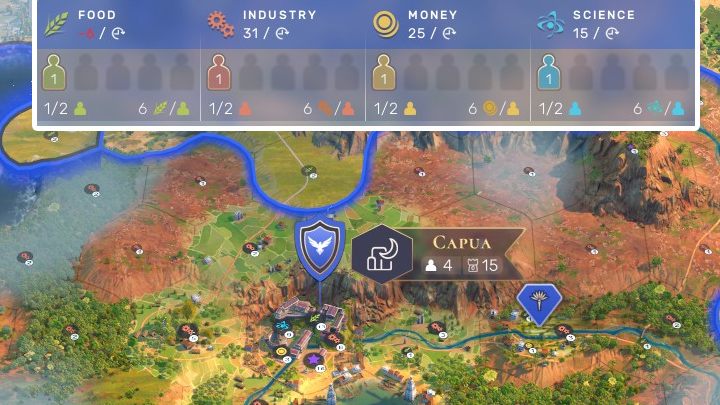 Capua has 4 inhabitants. Each area of FIMS of this city has one specialist assigned to it. It is worth adding more farmers and creating additional jobs, because food production is at a lower level than the demand of the population.

Unlike the districts, you can freely change the number and type jobs of your population in the city. Change their allocation according to your needs - do you build a lot? Put everyone in the industrial division. Do you need to develop important technology quickly? Direct all residents to work as scientists. This process can be automated by selecting the appropriate work allocation policy in the city panel.

At the beginning of the game, it is worth to take care of a large surplus of food to increase the population in the city. Too little food can lead to hunger and reduce the population of the city. Population units cannot migrate from city to city, but you can get around it. If you decide to dissolve a unit in the city field (click on the unit in the army panel and select the appropriate action below the unit portrait), the city will receive a population equal to the cost of that unit's population.

Outposts can also have a population. When a territory is annexed to a city, such a population automatically becomes part of the city. City and outposts have population limits. For the Outpost, there's always place for 4 inhabitants. The limits of the city are dependent on places for specialists, which can be expanded by building districts. If your outpost or city has an excess population, it receives a penalty of -30 food points for each resident over the limit.