Cities are a necessary element of the gameplay, without which you will not achieve victory. Cities are created from outposts, so first you need to occupy regions with outposts. Any land unit can do that. The first city can be created at no extra cost, but the next ones require an increasing number of influence points. In cities, it will be possible to develop science, raise money, and develop infrastructure.

The game follows a simple rule: one region = one city. During the game, you can combine several cities into one, thereby creating real metropolises. Cities can be expanded by adding other territories.

The location for the first city is very important. Therefore, exploration is crucial in the first rounds of the game. Your tribes have to search the area not only for bonuses scattered around the map, but the best region for the construction of the first city. The best areas are full of food and industry points. A site that has 10 points for both indicators is the absolute minimum to build your first city. This area will usually be covered with forests and prairies. Avoid desert and winter regions, which are often poor in basic resources. 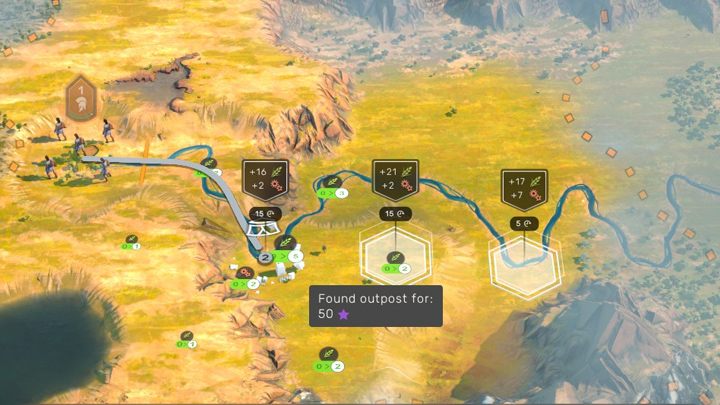 The Outpost location with an extremely high rate of food (21) is very tempting, but only 2 to the industry points means that the Outpost will be constructed very slowly. Better to choose locations with 17 food and 7 industry. This location of the outpost offers more opportunities for development.

Very good field has as many as 15 points, but it is difficult to reach a field, which offers such a bonus for food and industry. Look for rivers and special fields such as caves or waterfalls. Such bonuses add a few more points to the development. Rivers generate income for both food and industry. In principle, the more the better, the rivers are very attractive places to build! Outposts and cities (administrative centres) can "mine", that is, exploit fields that generate food and production - in contrast to regular districts, which can collect only one type of resources.

Where to build cities?

The field for the first city is not only a high income of basic resources. If you see luxury or strategic resources (even those not yet discovered by your scientists), then it is worth changing the region and choosing an even worse field for building a city. See what bonuses are offered by luxury resources in the area - if you get additional points of food or stability, then it is worth moving to such an area. Of course, you can simply add the region to the city and put the extractors or mines, but in these first rounds it is safer to have such resources close to each other. The enemy or Independent People can simply destroy such an outpost, and you will lose time and invested points. 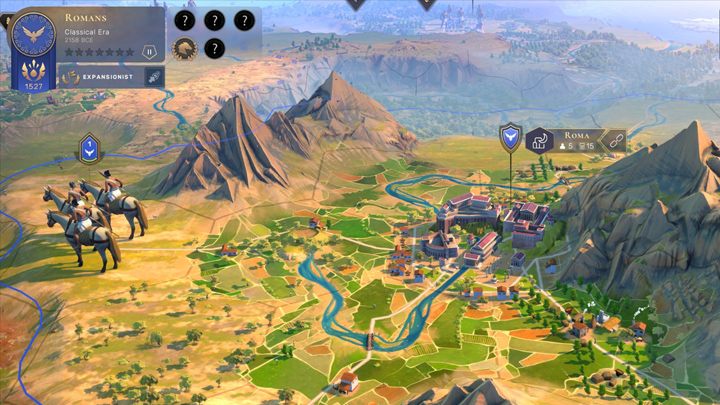 Rome is in a good position to develop. There are rivers and forests rich in resources. The city is on a high hill, so it will be easier to defend. There is also a lot of space for the expansion of the city with new districts.

Do not build a city in isolation, that is, in a place where it will be difficult for you to expand, for example, in an isolated peninsula. Expansion is at the heart of the game, and if you can't add new regions or build new cities, you'll quickly fall behind other nations. The defensive aspect is equally important. Setting up an outpost in a defensive position, behind a river or on a hill, will greatly facilitate the defense of your army. 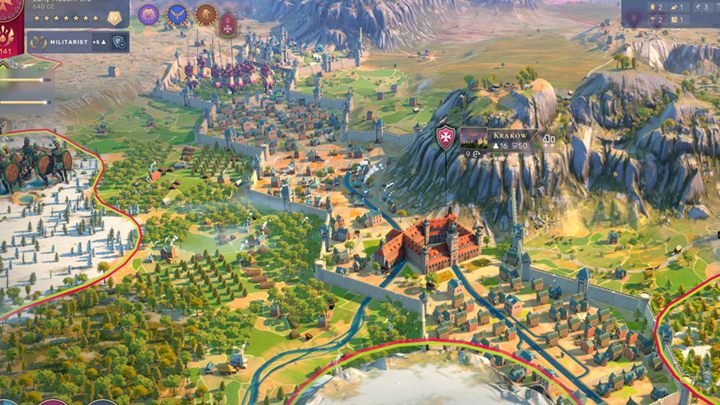 Cracow aims to protect the borders of the state. Therefore, erecting districts and garrisons between mountains and different territories is of greater strategic importance than the potential for economic expansion of the city.

Pay attention to the borders of the regions. If there is not enough space around your outpost, then the merging of regions can open up new opportunities. Remember that emblematic districts (i.e. unique for a given culture) can only be built once in a given region. However, they can only be adjacent to each other when they are in separate regions. It's just a way to accumulate their bonuses and income.