On this page of our Humankind guide you'll learn more about outposts and claiming territory.

Outposts are necessary to gain control of territory - the map in the game is divided into tiles/hexes, which are grouped together into territories (regions). These areas are the most basic administrative unit you'll control. A territory's borders remain unchanged the entire game! They'll never be expanded or reduced. They are created at the very beginning of the game and stay the same right until the end. The player can only influence the territories under their control.

Any unit can build an outpost. When selecting a tile, you'll see how much food and industry the outpost will be collecting. Although it might not be a full-fledged city, it's worthwhile to make sure the outpost collects plenty of both. Building each outpost costs Influence - the cost will grow depending on the number of outposts already built and the outpost's distance from your cities. 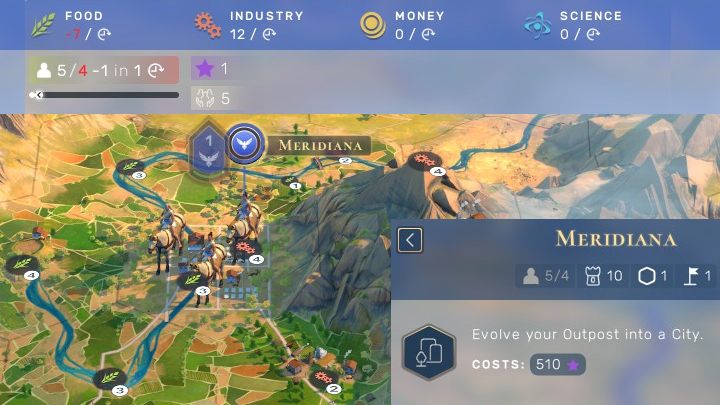 The area around this outpost is a promising location for a new town, even though it requires a lot of Influence.

The example above shows that the outpost already has 5 Population thanks to the food collected from nearby tiles, that being 14 Food, and 12 Industry. This is a good location to build a new city in, but it'll cost 510 Influence due to 2 other cities already existing.

Population grows faster with a high food production, while high Industry allows you to finish building the outpost sooner. Outposts can evolve into cities (by using Influence, the cost grows depending on how many cities you're controlling at the moment) or be added to already existing cities.

Actions available in outposts (not connected to the city)

Each outposts has several available actions which bring you benefits. Outposts don't have industrial or administrative facilities, so all available actions cost Influence. Sometimes it's a better option, as these actions have an immediate effect. Cities have to spend Industry and time to build such objects. Therefore it's a good idea to build (or rather buy) all available objects before connecting the territory to a city. 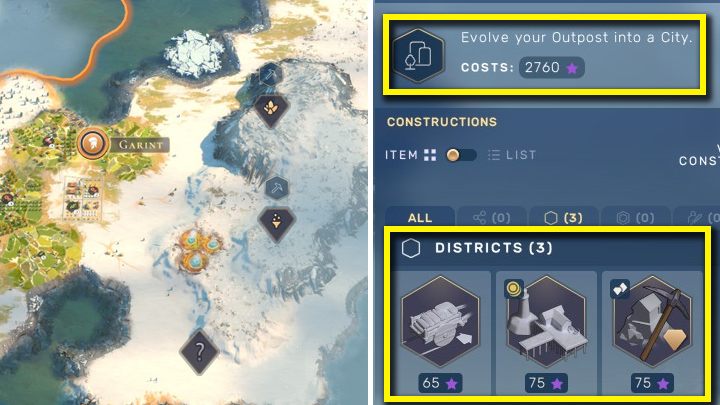 Sometimes outposts are built exclusively for strategic purposes. As we can see on the picture above, this area won't support a new city too well. The cost of doing so in Influence is very high. However, around this outpost there are several luxury resources and a yet undiscovered strategic resource. You can build several objects here for a negligent cost in Influence. In the later stages of the game you'll have to annex areas like this one to seize resources necessary for new units and buildings.

At the cost of Influence, following actions can be taken in the outposts: