On this page of the Humankind game guide you'll find out more about outposts. The game Humankind is a typical strategy, where units and cities are the most important elements of your civilization. The following guide explains how to increase the strength of your army early on.

In the Neolithic Era, you can only have one type of unit - the Tribe. This unit can only be acquired during this era. Each of your units has a separate supply of food and once they collect 20 units of this resource, a new member of the tribe will be added to the army. You can obtain food in several ways: by hunting animals, collecting bonuses known as Curiosities from the map and by plundering Sanctuaries (locations that serve as animal dens). 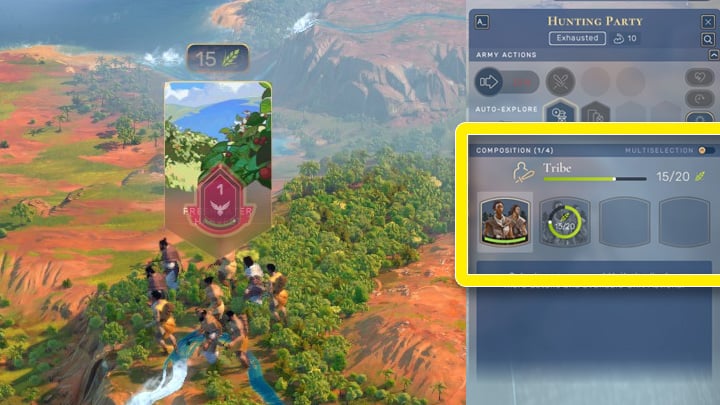 This group has just gained 15 food points, and it needs 5 more food points for the next tribe to spawn.

Tribes can also be trained in previously built outposts. You population needs to be in this location. The outposts themselves collect food from nearby fields and may have several population points. Just select an outpost and click on the tribe icon. The cost of training a new Tribe is a few influence points and 1 population point.

After advancing to the Ancient Era, one of your outposts will convert into a city. From now on, the only way to get new units is by training them in the cities. Each unit costs a specific number of industry and population points. At the beginning of the game, most units will only need 1 population point. In later eras of the game, some units might even need a few population points, e.g. Musketeers require 2 points, tanks 3 population points, and contemporary Rifles need as many as 4! The more advanced the unit, the more production points it requires and you will need to have access to strategic resources. If you do not have the necessary strategic resources within your territory, you can always obtain them through trade or by establishing new outposts just to extract them.

Therefore, developing your cities won't just increase production capacity, but it also provides a steady increase in population through the development of agriculture. Build farming districts, add farmers as specialists in your city and create projects that increase yields from tiles producing food. An important part of the economy is funds, because contemporary units need to be paid for their services. At first, you won't have to pay significant sums, but as you near the end of the game, each unit will need up to several dozen coins per turn.