This page of the Humankind game guide explains what outposts are and describes the best locations to build them.

Outposts in Humankind are a vitally important element in the expansion of your nation. Without them, you won't be able to expand or develop your cities. They are necessary to occupy new territories. Without them, you would be unable to take over new, unoccupied regions.

An outpost is a settlement that can be set up by any unit. This action can take up to several rounds (depending on the number of industry points from neighbouring tiles). You can place it in any territory unoccupied by another player. It costs Influence points, so it's a good idea to stockpile them. The further away from the capital, the nearest city or other outpost, the higher the construction cost will be. Be careful, because other countries can plunder and destroy your outpost. You will only be able to protect yourself by leaving your own unit on the outpost tile, annexing the region to the city or signing a non-aggression pact with your neighbor.

Where to build outposts?

Outposts should be built in neighboring regions, especially if there are many tiles rich in food and production. Even better if there are luxury or strategic resources nearby. The latter are necessary to produce better units and districts, so it's a good idea to annex such territories first. Keep in mind that outposts collect food and may have several population points that will become part of a new city (or join an existing one). Rivers, prairies and forests are always a good choice of location, because they provide a few more production points. Additionally, tiles with special features, such as geysers, waterfalls or caves, have an even greater effect on the yields from these tiles. 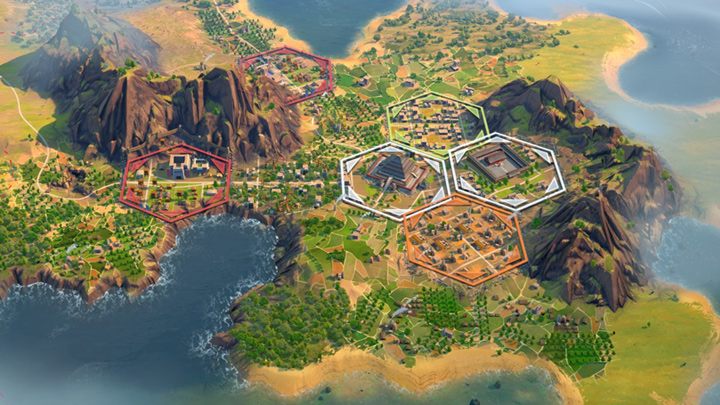 This city will be easy to defend against attacks. Additional garrisons and walls next to the mountains will make this city a good stronghold.

Having an outpost close to enemy territory also has its pluses. Set up an outpost in a narrow pass so that it is easy to defend. Tiles with outposts provide additional strength points to the unit located on them. Outposts can be relocated within the boundaries of a given territory, for example if its current location isn't great for building a new city. This action costs a small number of Influence points. You will be unable to do this once you annex the region to the city.