On this page of the Humankind game guide you will learn more about combat and movement. At the beginning of the game, you will mainly command groups of tribes. Below you will find tips and basic information on how to fight and move armies and units. It's a good idea to familiarise yourself early with unit movement and combat mechanics, because more aspects will be added in subsequent stages of the game.

Each unit has movement points that you can spend on moving around on the map. Units can be combined into groups - armies. In the beginning, such an army can number 4 units. Combining or splitting units and groups only costs movement points. Movement points can be increased through technological advancement and random or cultural events.

From the army screen you can choose which units you want to split. It's a good idea to combine your units into an army, because this is the only way to increase the number of units during battle. This restriction exists throughout the Neolithic era. As technology advances, you can increase the number of units in the army from 4 to as many as 8 units and unlock the ability to send reinforcements during battle. Thus, more than one army can participate in a battle. 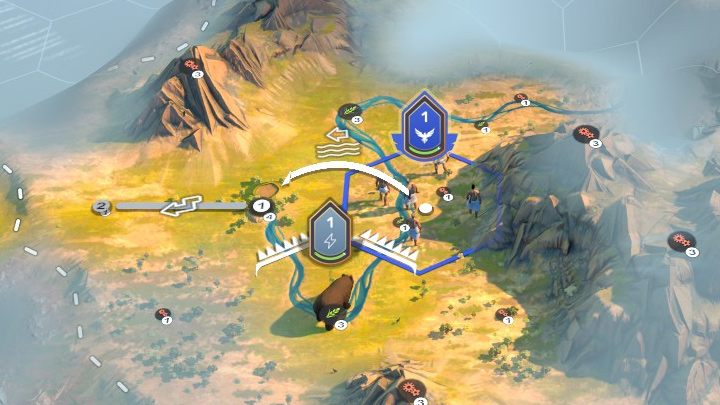 Unit movement is not only limited by rivers, but also by enemy units.

You may encounter various obstacles on the map. Moving between tiles of different heights doesn't affect movement points, but cliffs will prevent movement between such tiles. Moving an army through forests and jungles requires more movement points. When it comes to rivers, they will end the unit's turn, but moving along the river doesn't cost additional movement points - use this to your advantage if the river runs through many tiles with difficult terrain, such as swamps or forests. Leaving a river tile also doesn't cost movement points, but entering the same river or another river ends the turn of a given army.

You can still change the direction of movement after the movement order has been given! If you give the order to move far away, you can change the destination point. The unit will change direction and head to the new location, although it might still take a few steps in the previous direction. This is a good solution to avoid wasting time if you mistakenly order a unit to move. You just need to quickly click on a new location.

Each unit / army has access to special actions. Your units have the opportunity to build new outposts and plunder districts and various objects on the map. This way, you can destroy an enemy outpost if it hasn't been annexed to a city yet. Each of these actions pauses the army's movement for one or more turns. This particularly affects looting, which is dependent on the unit strength and enemy territory (especially in the later stages of the game). Moving or combat will cancel the action and the unit might lose some or all of its action progress.

Combat takes place when your army stands adjacent to the enemy army. Then you have to issue a separate command on the enemy army to initiate a fight. Before you need to confirm this choice, you can see a preview of the battle. After selecting your own army, just hover your cursor over the enemy army. You will see the proposed army formation, the tiles on which the battle will take place, the strength comparison of the two armies, potential reinforcements, etc.

In the beginning stages of the game, it's always good to initiate fights! All units are similar in strength, so being the first one to deal damage can give you a significant advantage. Army composition, terrain shape and unit variety will all be important factors later on.

You can play out the battle yourself, but with two units against one, it's better to choose the automatic outcome of the battle, which is useful in the initial stages of the game or when you have a significant unit advantage. On the battle preparation screen, there is a special bar that informs you about your chances of winning. As it happens in many strategy games with similar systems (eg. the Total War series), this information isn't always reliable. Only use this option if you have a really big advantage and are at a similar or better technological level.

If you have fewer units or the terrain is not favorable for your army - it might be more reasonable to retreat. This way, you will avoid the battle, but such an army will have fewer movement points in the next round and will not be able to perform special actions. On the other hand, you will save your units and they will get a chance to take part in a more even battle. 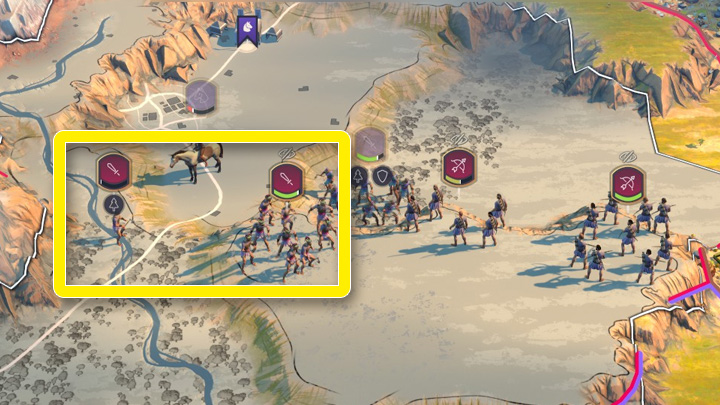 Two infantry units are blocking a narrow passage so archers can safely attack enemies from higher ground - proper unit positioning is often the key to victory.

Keep an eye on the area you're battling in - fighting in the forest, between rivers, at different altitudes or in narrow passages can determine whether you win or lose. This is a good time to choose a manual battle. This way, you will make the most of the terrain features and even a weaker army will win against the enemy.

In manual battle mode, keep in mind the following: