In the chapter below you can find useful tips regarding the machines that you can come across during the game. Each of the machines are described in separate sections. 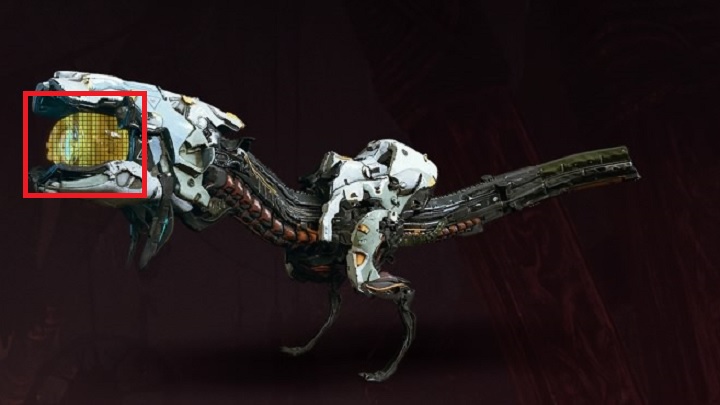 Without a doubt, the weakest point of this machine is its eye. Hitting it right in the eye eliminates it but only if you shoot directly in the eye (without hitting machine's armor). In the later parts of the game you can defeat it quickly by using a few melee attacks. Of course the torso is resistant to damage so any attacks that aren't aimed at the eye will be reduced. 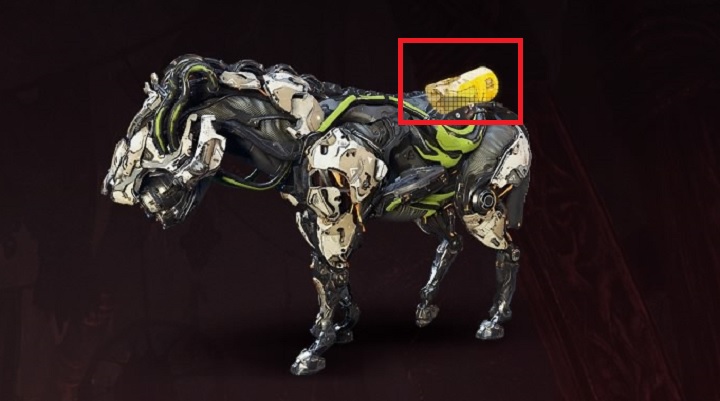 The container on its back is the weak point of this machine. When you hit it with a fire arrow the machine will explode. If you use a regular one then you can tear it off and take it. In both cases the machine will sustain a lot of damage. 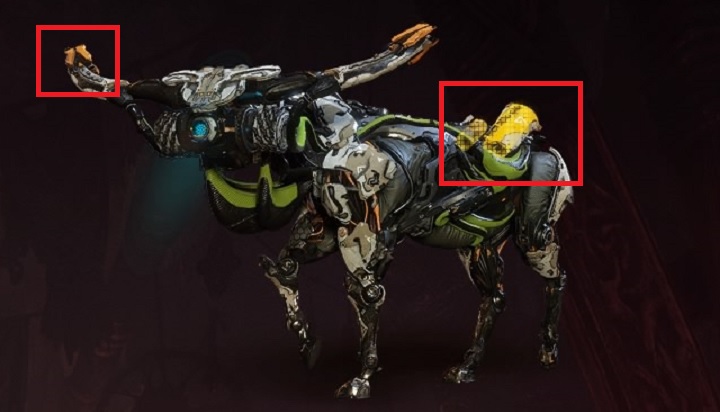 In the case of this machine things are easier because it has two weak points. One of them is the container on the back, it works the same as with Strider. Besides that the machine also has giant horns that can be torn off by using weapons. The machine's torso reduces all types of damage. 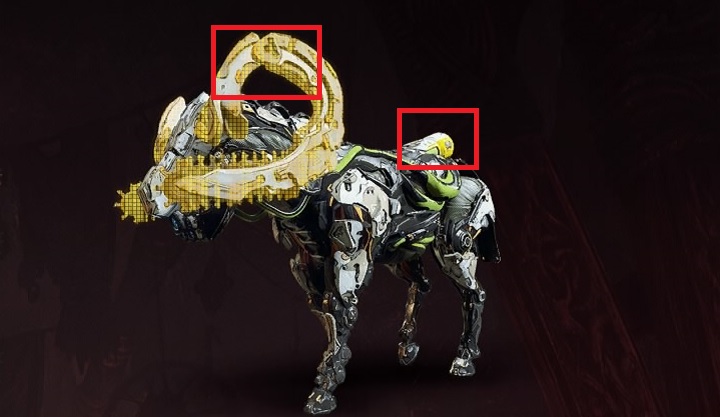 Another machine that can serve as a mount. Again, we have a container on the back and horns, just like a Broadhead. Usually you need to use a few strong attacks aimed at its torso to eliminate this machine. 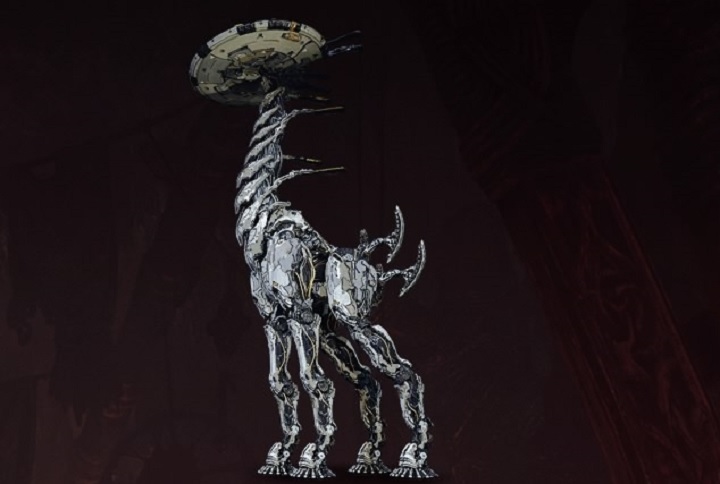 This machine is completely invulnerable to any kind of damage. It's not harmful and it won't even notice Aloy. However, it can trample you if you get under its legs. 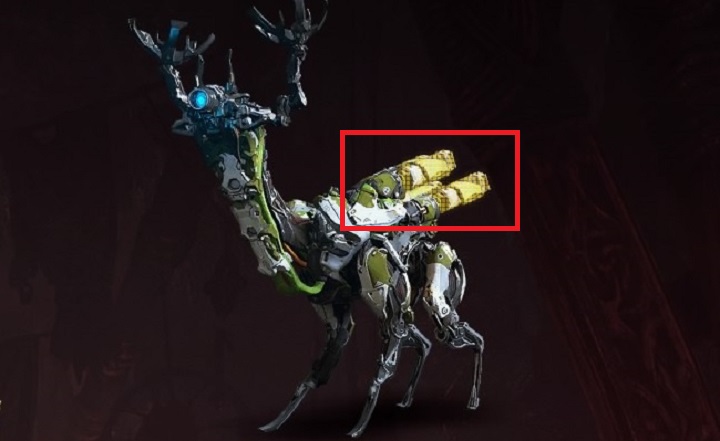 At first glance you can easily notice a rather well-exposed container on its backside. If you shoot it you can set it on fire or tear it off which will deal damage to the machine. It works in big groups but it can be easily scared. If you override it then it will use its horns against other machines. 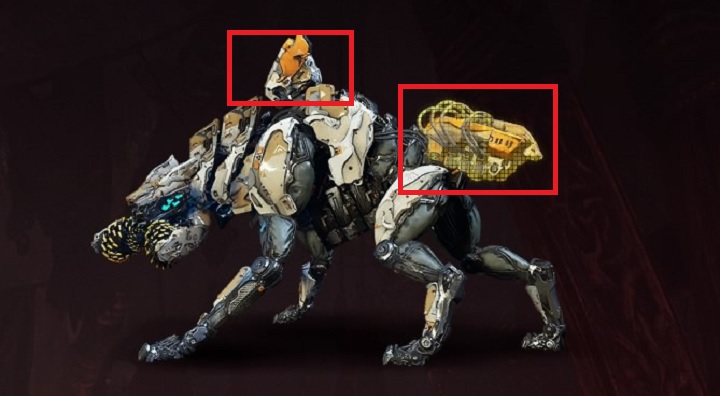 The easies target is the radar on the top of its back. You only need a few shots from a bow to tear it off. Thanks to that you have more chances to stay hidden. Besides that the most important target on a Scrapper is the power cell located on its backside. Use regular or shock arrows to quickly eliminate this machine. 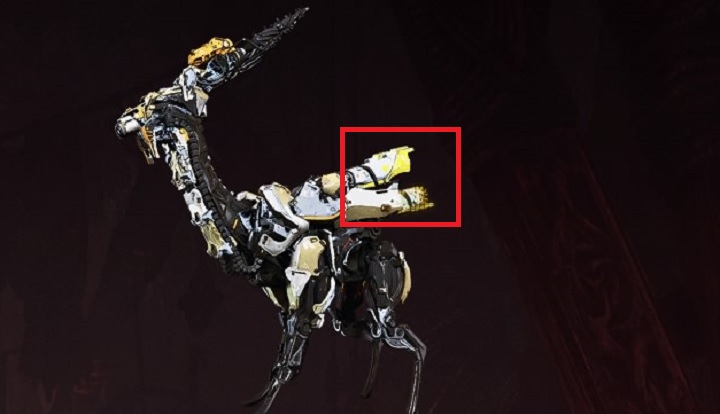 This machine resembles Grazer. If you want to destroy it you must freeze or tear off the container on its backside. Lancehorns are easily scared but they can attack you by using its horns if you are too close to them. 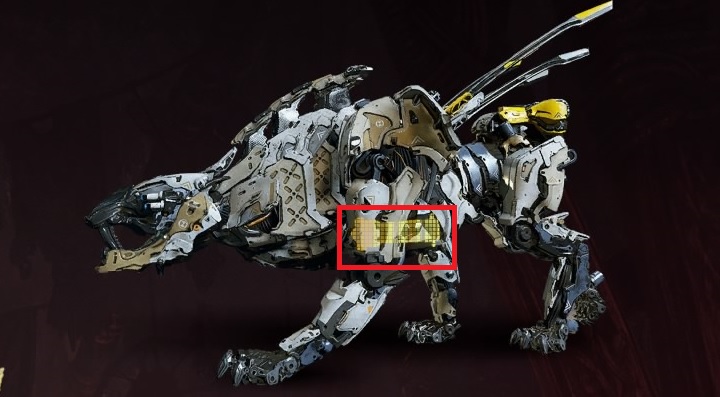 It should be noted that this machine is especially vulnerable to fire. Its weakest point is the container with a flammable substance located on its belly. If you manage to set it on fire then the machine explodes and loses most of its health points. 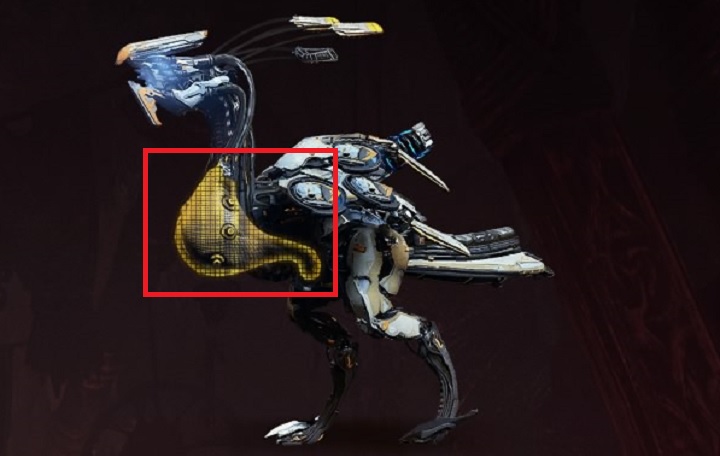 Every part of this machine is vulnerable to damage. First, you should destroy its concussion sack which will release an airwave. Thanks to that not only this enemy but also others can lose its armor parts which will make things a lot easier. Besides that, as most of the machines, Longleg gets its energy from a power cell that can be easily shot. 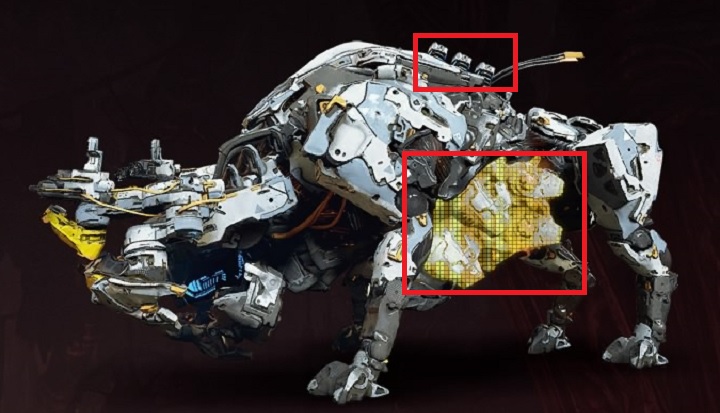 Another machine where almost every element is its weakness. The most important part is the power cell on its back that can be shocked which releases an explosion that can shock nearby machines and inflict this status on them. Another weak point is the processor located on its belly. Destroying it causes and explosion. 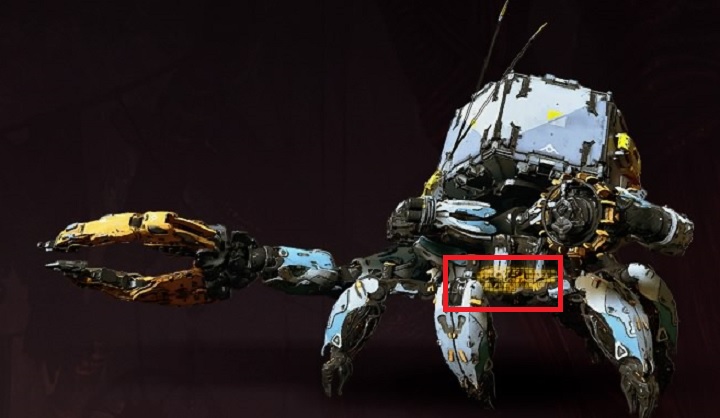 Fighting against this machine can be rather troublesome mainly because of its special energy shield. You can shoot the elements that creates that shield because they are rather big and are an easy target. However, the weakest point of the Shell-Walker defense is the power generator. When you destroy it the machine is almost completely defenseless. 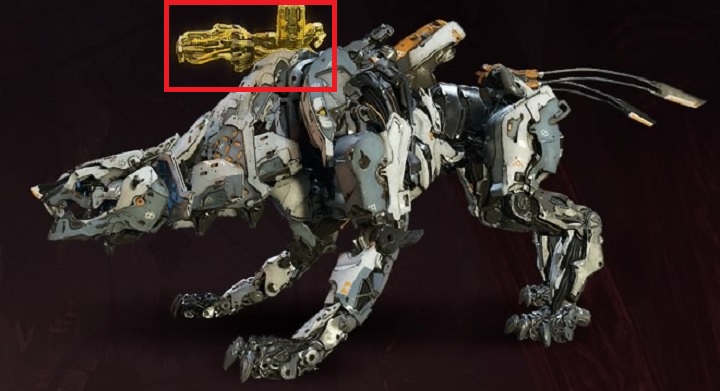 Very vulnerable to all elements, especially to fire. The machine can quickly heat up and set on fire. Watch out for its cannon located on the back. Try to tear it off from the torso. Then, you can pick it up and use against the machine.

Just like with the previous one, this machine is also very vulnerable to fire. You can set its torso on fire or shoot the part marked in the picture to cause an explosion that will set this machine on fire. 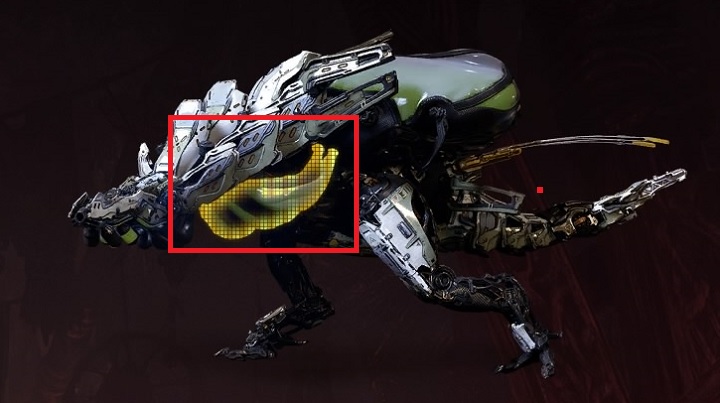 You can deal with those machines in the same way. Aim at its biggest weak point which is their cargo sac. Destroying it causes an explosion and greatly weakens the machine. You should remember that the machine's torso is vulnerable to elements but after destroying the cargo sac all other arrows should be aimed at its throat. 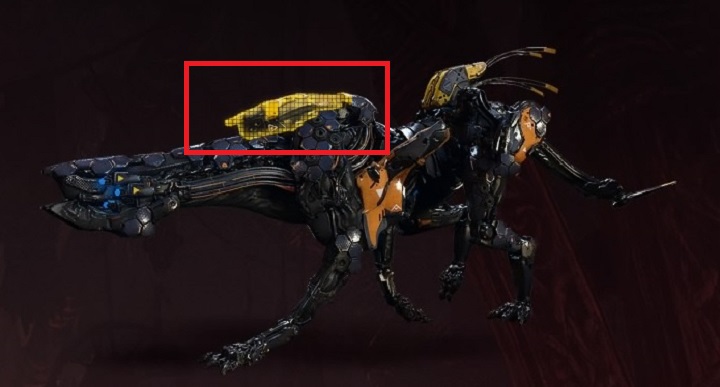 Its torso is very vulnerable to fire damage. What is more, you can ignore the fact that this machine can use camouflage because it can't use it when it's set on fire and when this status disappears you can notice sparks which can reveal its position. Remember to destroy its launcher on the top of its back. After that the rest of the fight should go smoothly. Watch out for the melee attacks when the machine uses its tail. 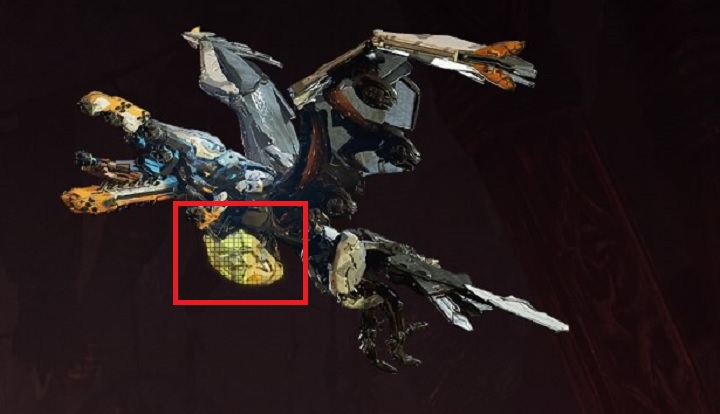 Just like with the previous machine, this one is vulnerable to fire. Setting this machine on fire makes it land on the ground and it stays on it until the status ends. If you don't have fire arrows you can destroy the freeze sac on its torso. By doing that you cause a freezing explosion. 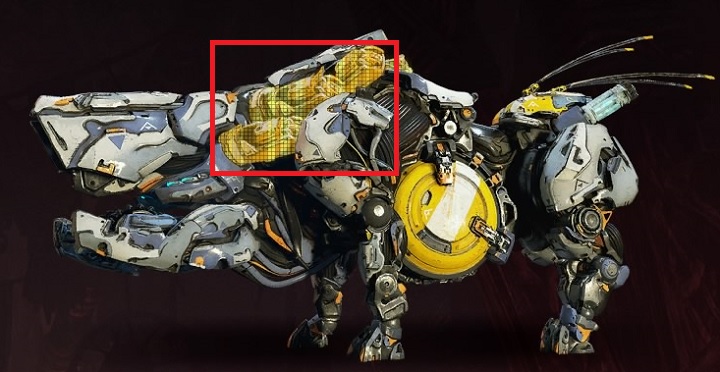 Here the things are getting complicated. Keep your distance and shoot the force loader on its face. You must do a lot of dodges. You should wait for a moment when Behemoth turns in a such way that you can shoot the power cell and inflict shock damage. The biggest problem is that the weak point is really hard to access and if you miss then you waste your ammo because its torso is highly resistant to shock damage. 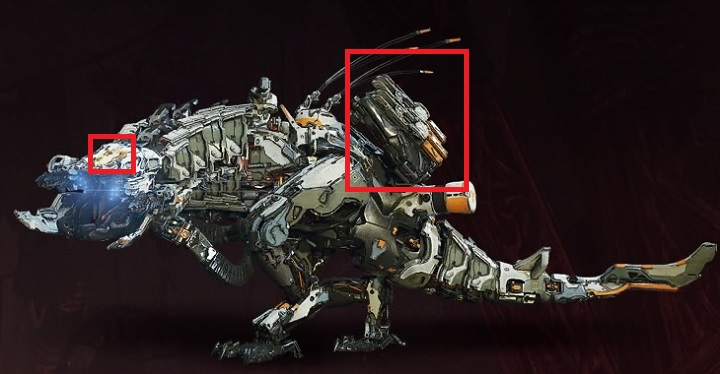 The first thing that you must do during a fight with this machine is to destroy its disc launcher. If you won't do that then there is a chance that you can die by first shot from this weapon. The weakest point of this rather big machine is the data nexus located on its mouth. However, you can't access it directly. First, you must destroy the armor that protects that part. The best way to do that is to shoot a few explosive arrows at its mouth and then use a regular weapon and attack it when the machine prepares one of its range attacks. 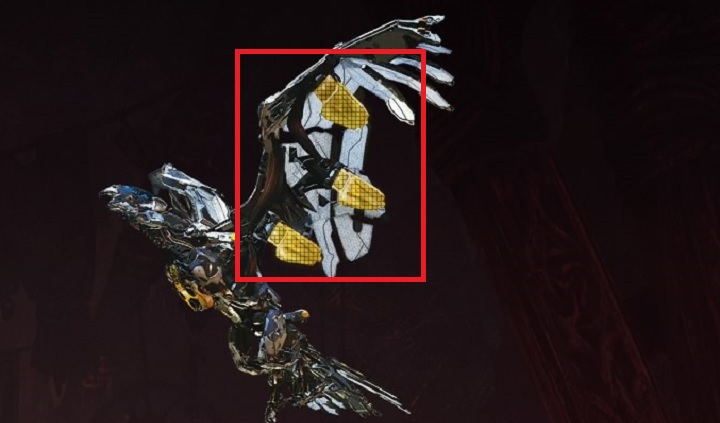 This machine is the hardest one to fight because it can fly. Sometimes, it can surround you in a such way that it can be in your blind spot above your head so you can't do anything to it but you still receive damage. The first thing that you must do is to destroy its lightning gun which allows you do avoid the biggest threat. Stormbird can still try to dive and deal damage but those attacks will be more telegraphed. Try to use explosive arrows and shoot them at its wings so it won't be able to perform any offensive moves. After that you have to set it on fire or freeze it in order to eliminate this machine.

This machine is only met a few times but you must know that the most effective element against it is freeze. Try to freeze it which slows it down and then try to destroy its arms. When the machine is unable to dive into the ground the fight becomes much easier. Freeze it and aim at the fuel sac on its belly to detonate the power cell that gives energy to the machine. 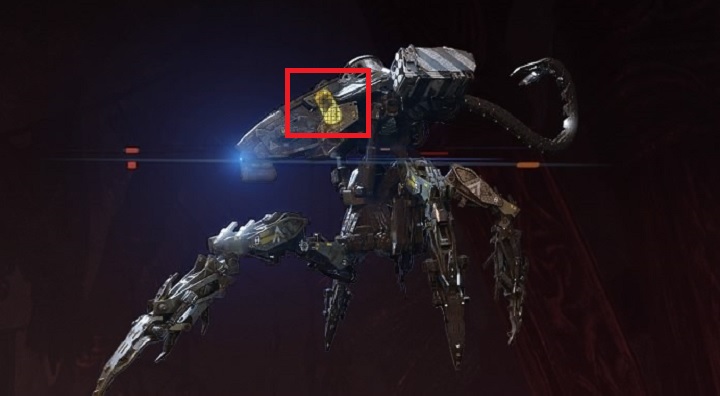 You have to keep setting it on fire until the machine overheats. The heat core becomes exposed during the cooling down process. By shooting it you can deal the biggest amount of damage to the machine. Repeat this process until the machine is destroyed. 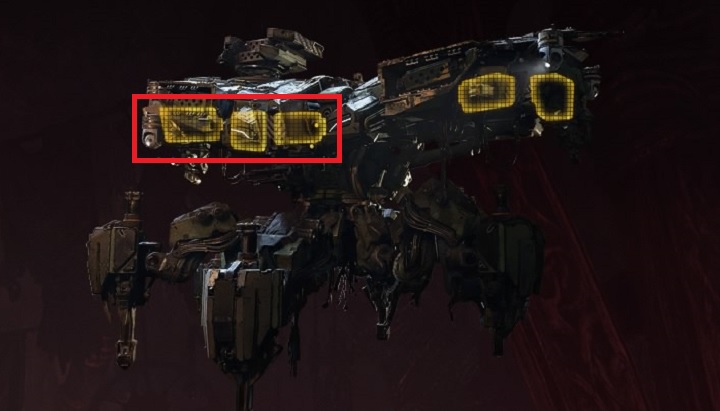 One of the most powerful machines that you will face. However, this doesn't mean that those fights have to be difficult. Remember that the machine's torso is vulnerable to fire so focus on setting it on fire. When this happens you can notice that the machine overheats inside. When the bar fills up the machine will open cooling rods in order to cool down. You must destroy as many as you can. Thanks to that the machine will overheat quicker. Also, the attacks aimed at cooling rods deals the biggest amount of damage. Of course, you should also destroy its armaments but this won't be easy.