The following chapter provides a detailed description of the gameplay during Blood on Stone. You will find tips that can help you complete the quest in the most effective way possible.

You will receive the quest in Cut Cliffs village from one of the quarry foreman. Talk to him and he will reveal that a couple of guards were murdered during the night. Aloy needs to find out the murderer. 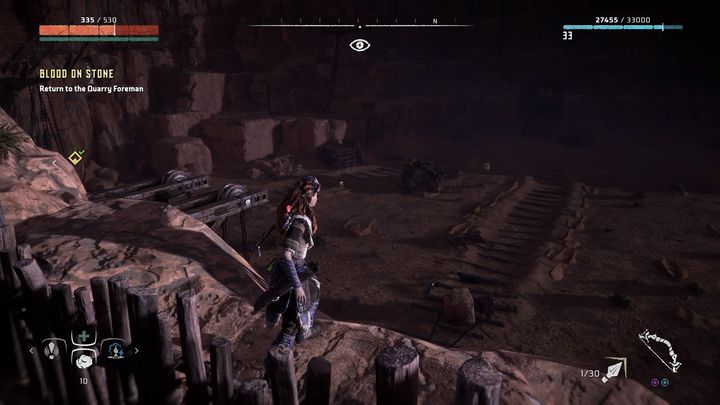 Follow the indicator to the quarry. Investigate the marked elements of the quarry, starting with the explosives on the ground. Turns out that there is a machine underground which digs like a mole. Your task is to eliminate the threat.

Start the fight by activating Focus. Scan the machine and lock-onto it to follow its moves. Unfortunately, it won't help if the machine goes underground. You need to follow tracks left by the Rockbreaker, in order to predict its moves. Apart from that, if the machine is close enough, you will notice significant increase of disruptions.

There are two ways to defeat the machine and both of them require dexterity. The fight is going to be a tough one, and if you want to engage in close combat, make sure that Aloy reached level 40 or higher. Freeze the machine and use traps. The best idea would be set a couple of traps in one place. Just stand there for a while until the machine tries to attack you. When the Rockbreaker gets to the surface, it will activate the trap.

Your target should be the limbs that allow the machine to go underground. Point your arrows at them and the machine won't be able defend itself against attacks. The easiest way is to freeze the Rockbreaker which will significantly slow it down. Unfortunately, the machine is like to hide underground as soon as you that. Thus, it is so important to prevent it from digging.

Repeat the sequence till you destroy the machine.

If you want to finish your opponent faster, and don't stand a chance in close combat, you should try to eliminate it in range combat

Once you trace the machine, head towards the way leading to the quarry and sprint there. The wooden fence will not defend you against rocks fired by the machine. Thus, you have to dodge incoming projectiles. Use arrows with the highest piercing and slow down time when aiming. The marker will reveal the Rockbreaker's position as soon as he reaches the surface.

This strategy may be time-consuming, but it will allow you to defeat the machine at level 20. It's a good idea to charge three arrows at once. Just watch out when you aim at the "paws". The machine raises them just before the strike which makes it easier for you to miss.

Once you complete the quest, report to the quarry foreman. After a short conversation you will receive your prize.