This chapter is dedicated to one of the collectibles that can be found in Horizon Zero Dawn. Below you can find tips for getting all Metal Flowers along with tips on how to access them. 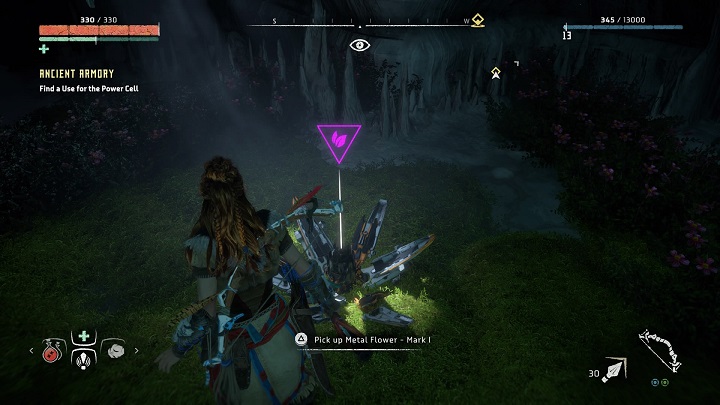 Return to the ruins that you explored during the prolog. By using your spear you can destroy the stalagmites that blocks the entrance to treasure chambers. In the one farthest from the exit you can find the flower. 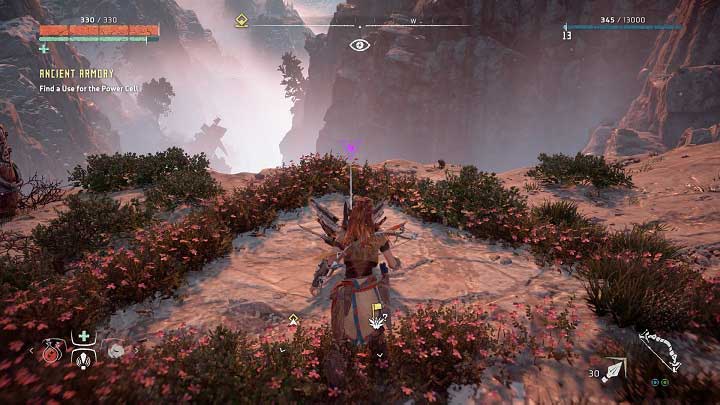 The quickest way to get to the flower is to use the ropes near Rost's house. Alternatively, go west from Rost's house, jump from the rock ledge and you will find yourself right next to the treasure. 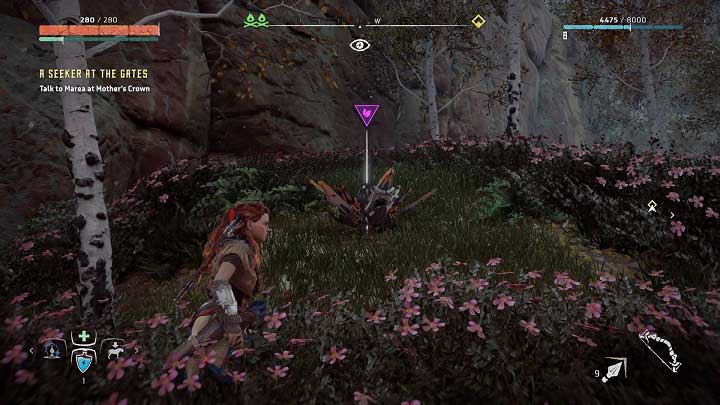 On the way between Embrace and Mother's Crown you can find an abandoned village. Stray from the road a little bit and you can quickly find the flower. You can easily spot it. 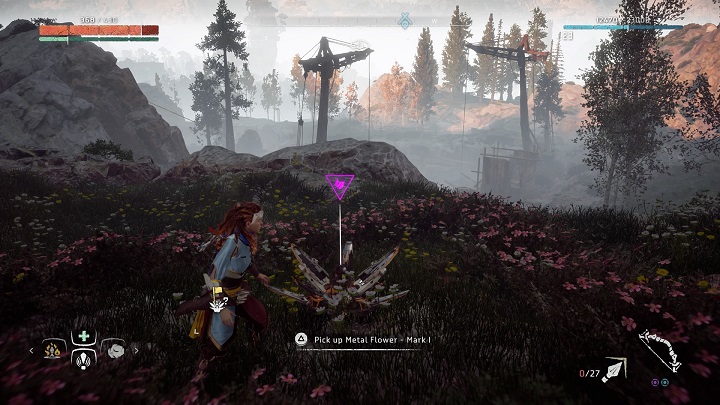 Go to the region that you once explored during The War-Chief's Trail quest. The flower is in the immediate vicinity of the cultists camp, the one that you attacked during the quest. From there, you can easily get to the item. 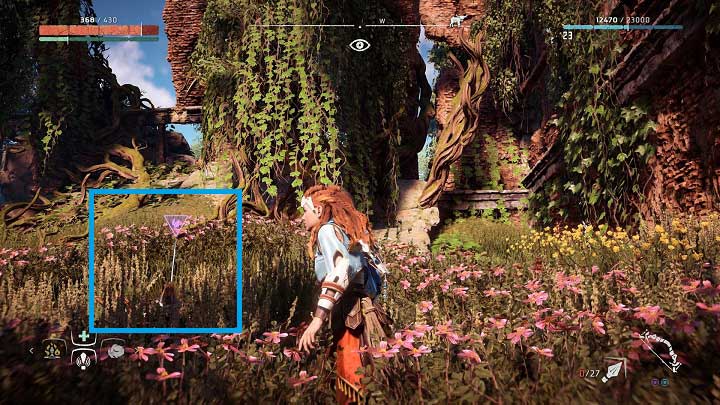 The flower can be found near the ruins. There shouldn't be any obstacles in the form of machines or difficulties in the access. Because of the use of colors for the environment, the marker can be harder to see in daylight but Focus can deal with it without any problems. 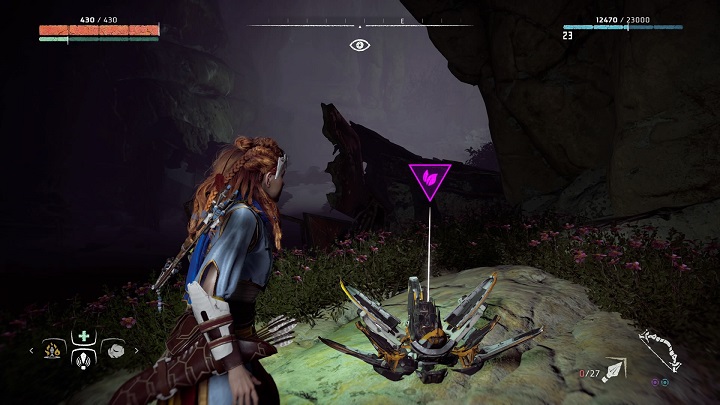 Enter the second ruins that can be found outside of Embrace. When you get to the cave jump in to the water and swim straight. You can very quickly find the flower on the left. 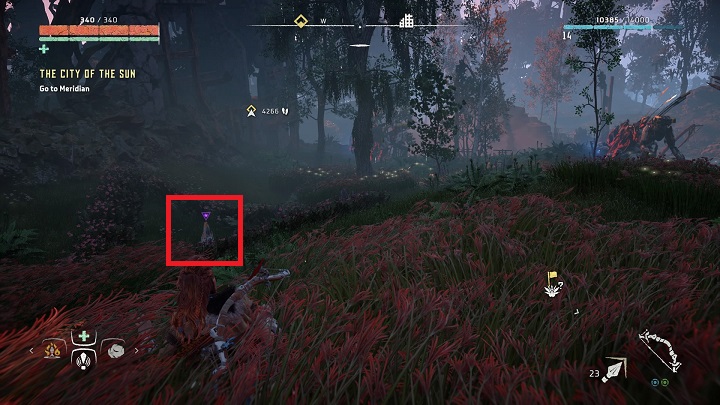 Finding the flower shouldn't be a problem but notice that there are two Sawtooths roaming the area. If you are quiet, you won't have problems with picking up the flower so sneak to avoid combat. 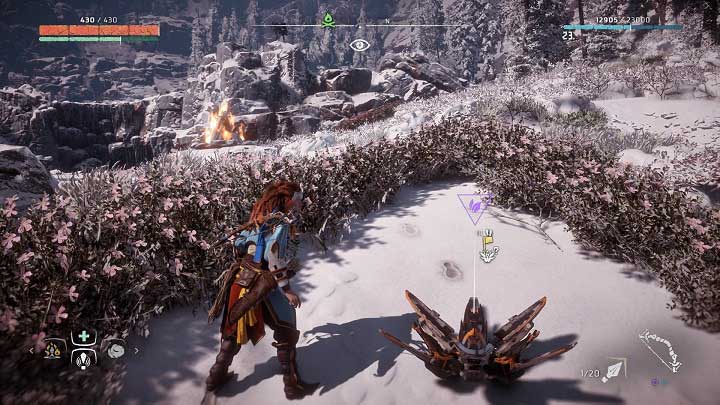 The flower is near one of the campfires. You won't have any problems with getting it. But beware of Glinthawks, their nest is nearby. Also, there are groups of bandits. 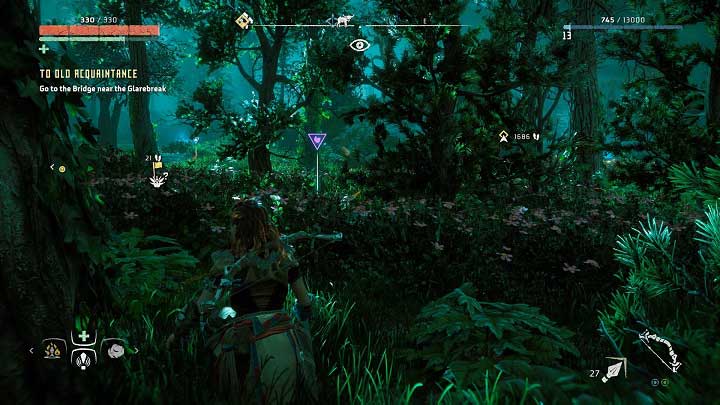 The flower is hidden in the bushes which can make the task a little bit more difficult. In the area you can find a few machines but the shouldn't be a problem during your searches. 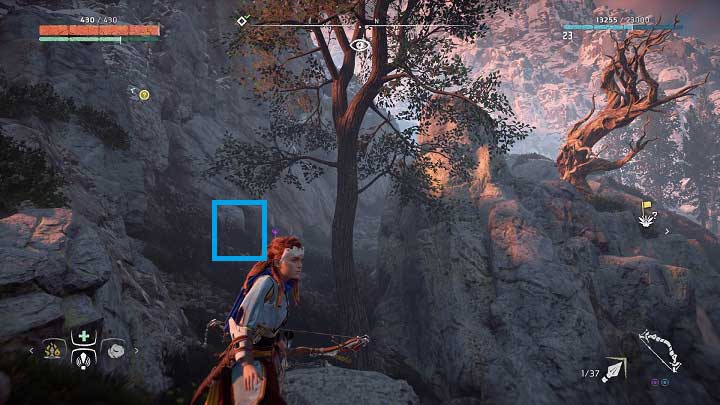 The last flower from the first set can be found near the road between Mother's Crown and Hunter's Gathering. Search for the distinctive twisted trees, that are presented on the picture above, and you won't have problems with finding the flower. 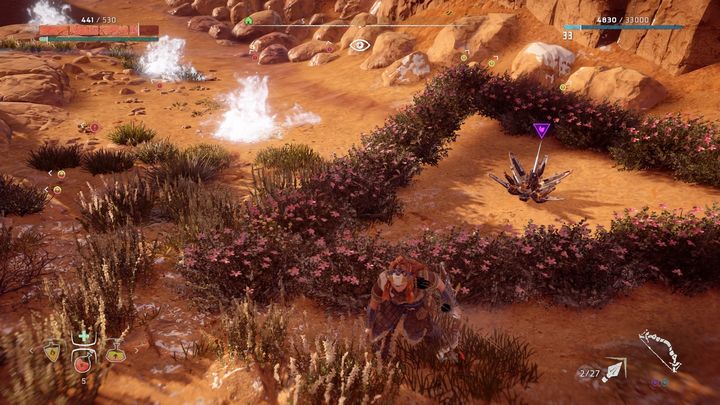 The easiest way to get to the flower is to start in Daytower. Go down the canyon and eliminate all machines. 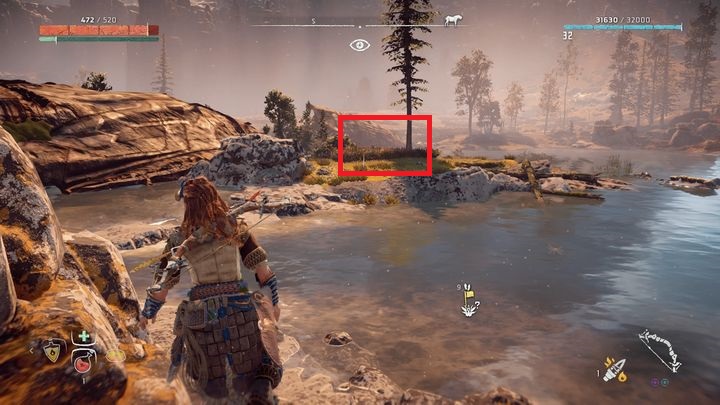 The flower is on a small island, in Snapmaws' nest. Use the airplane's wreckage, presented on the picture, as an orientation point. 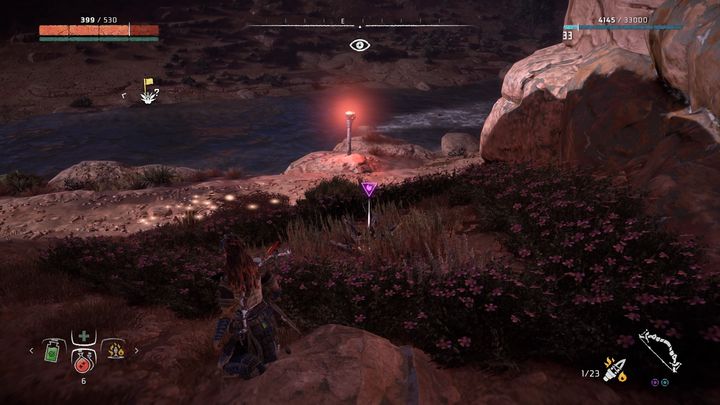 Follow the marker and search for a single torch near the riverbed. There, you will find the flower. 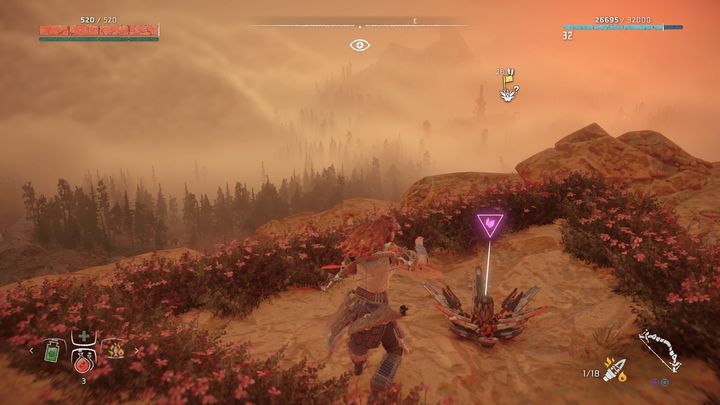 From the nearest campfire go to the mountain chain. Jump on it until you see Sunfall city. Go forward, defeat two Glinthawks and, in the place where they were sitting, you can find the metal flower. 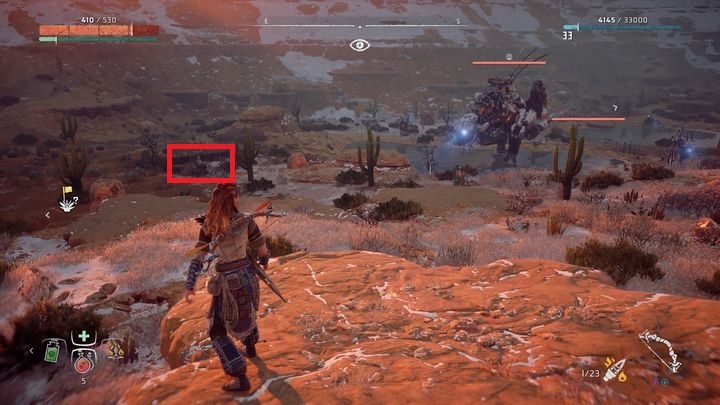 The flower can be found near Thunderjaws' nest. Depending on your level, the only solution to get the flower is to run there, grab it and use fast travel. 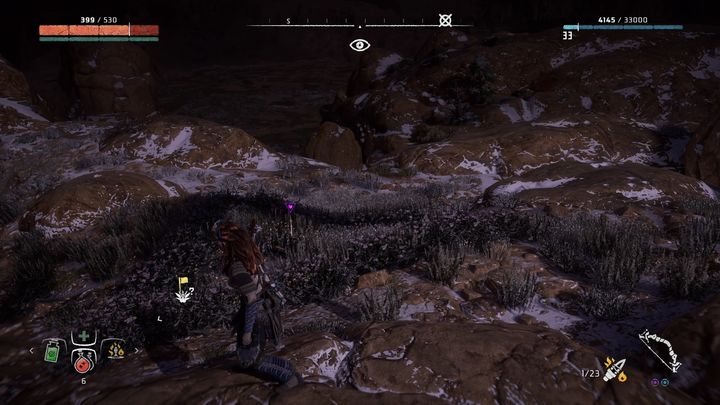 Go to the marker from the nearest campfire. You must climb the mountain chain nearby. There, use Focus. When you climb on the mountain, search for its highest point. In this case you should not pay attention to the marker's distance. 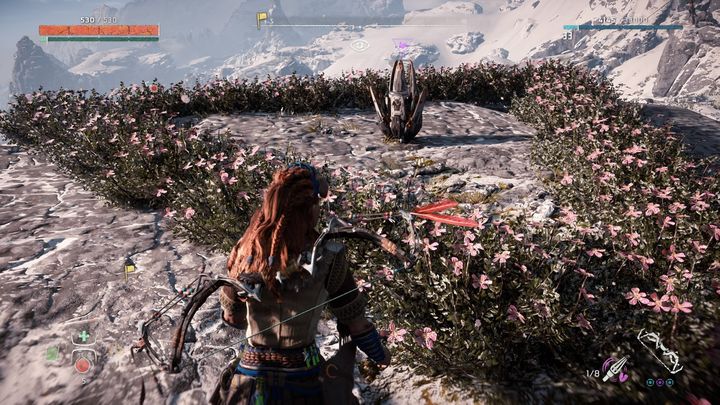 The flower can be found on the rocky hill near Stormbirds' nest. The marker is very precise in pointing the flower's location. 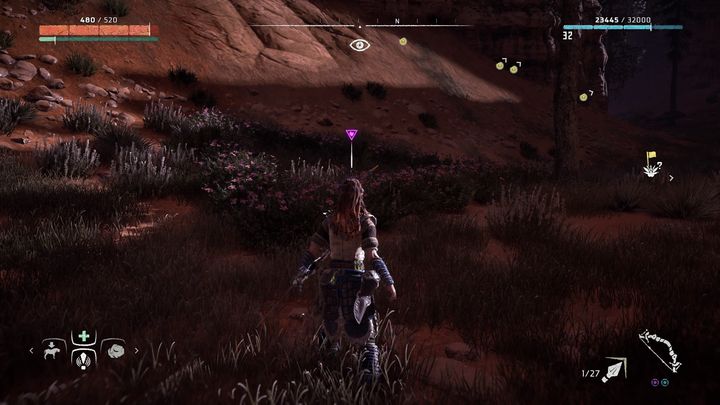 The flower is very close to the marker. There are many machines nearby, mainly Ravagers but you should not have problems with them, especially if you set them on fire. 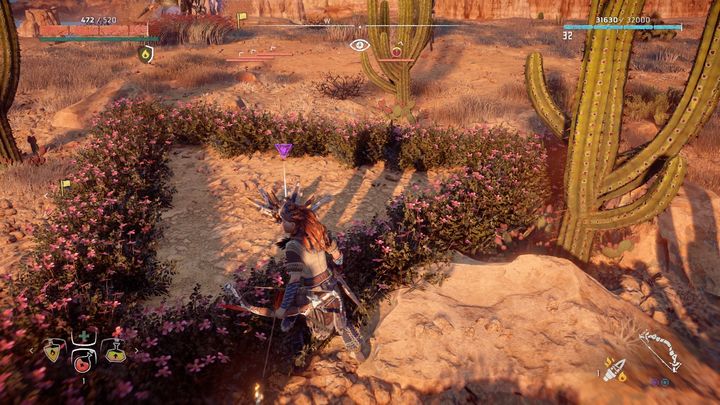 Travel to the campfire closest to Dimmed Bones ruins. Enter them and follow the marker. The area is guarded by a Ravager and three Glinthawks that will attack you simultaneously. Also, there you can find Lancehorns but they should not be a threat to you. 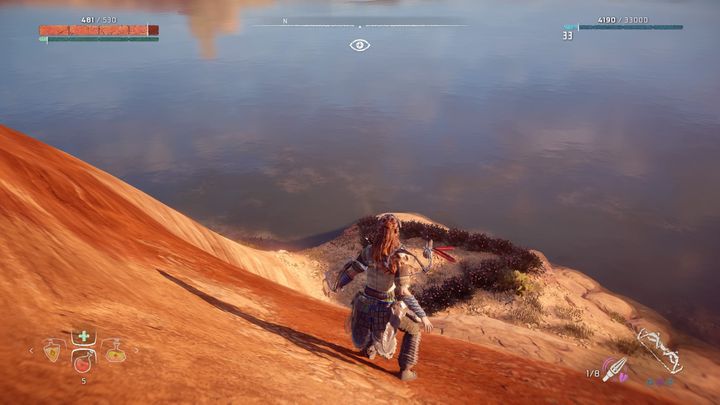 Here, the marker is very precise in pointing the flower's location. Climb the upper parts of the mountain to avoid Snapmaws' nest. 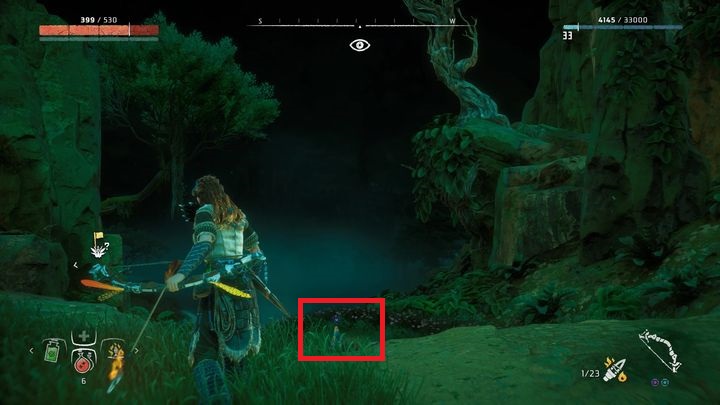 The marker is rather precise in pointing the flower's location. Search for the twisted tree, presented on the picture, and underneath it, you can find the flower.

The flower is in the center of Glinthawks' nest. You can run to the treasure, grab it and use fast travel. There are a lot of machines here so fighting them all at the same time can be very difficult. 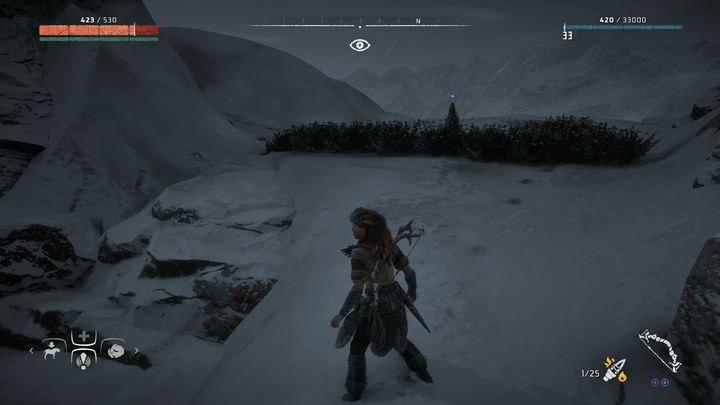 From the mountain path, presented on the picture above, you must climb a small hill near the marker. You can find one Sawtooth nearby. 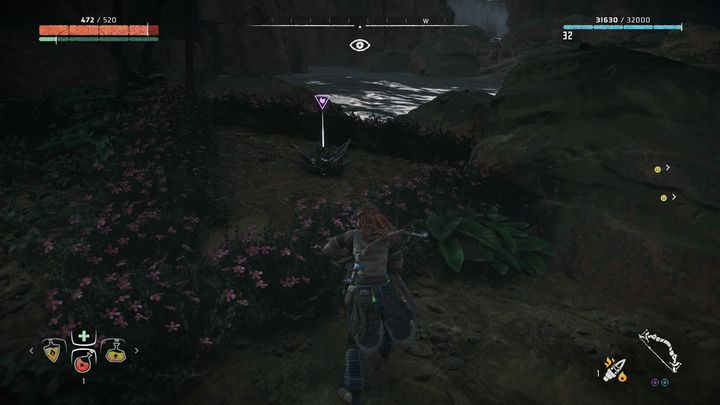 The flower is in the center of Bellowbacks' nest. If you run fast enough, you can avoid them all without being distracted. Stay close to the pond and you can quickly find the flower. 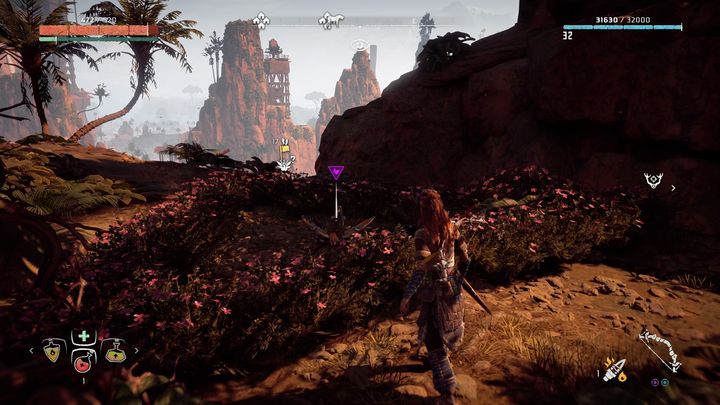 The flower is on a high rock. The entrance is located from Meridian's side. When you get there you can easily spot the handle. Also, there is a merchant on the top. 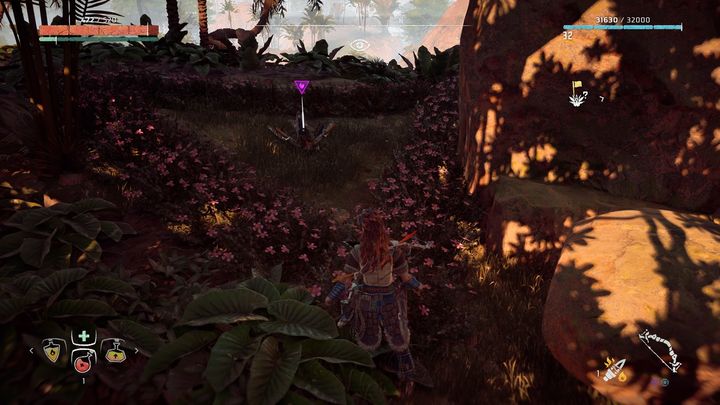 The flower can be collected during Cause for Concern - Farewell quest or in any other moment. The treasure is on the rocky hill on which you can find the campfire. Search around the marker and you will find the flower without any problems. 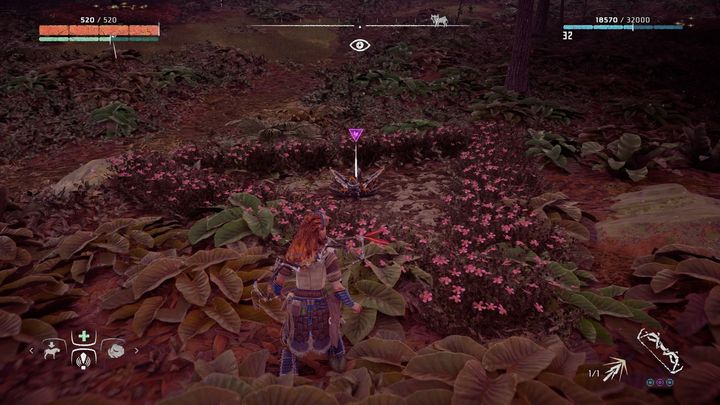 The flower is pointed by the marker. Look around the road and you can quickly spot the flower inside a small recess. 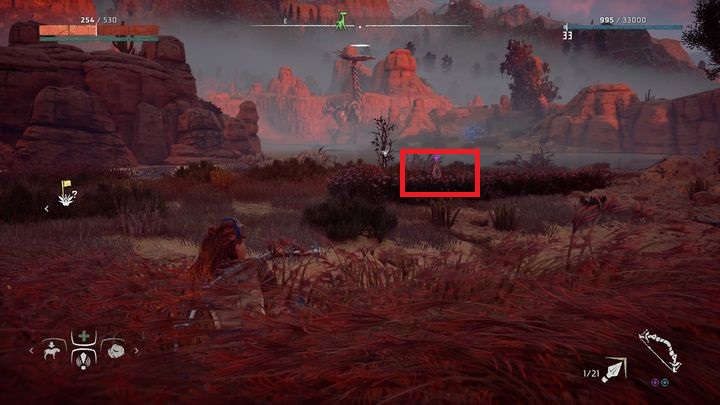 The flower is next to the pond, near the road on which the Tallneck walks. 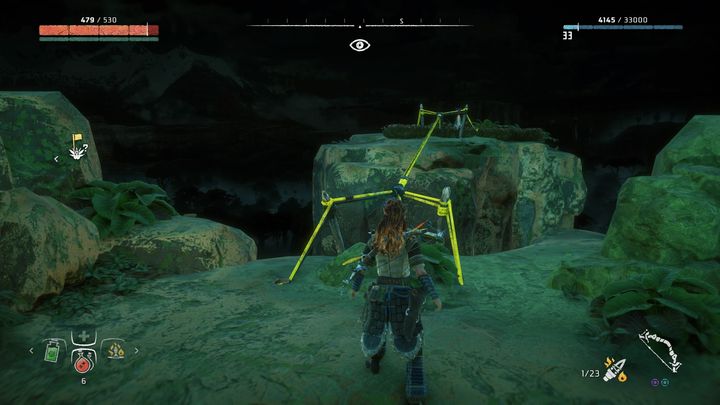 The flower is on a high rock. You can access it by following a gentle path. On the top, you can find three Glinthawks. Burn them and use the rope to get on a smaller rocky pole. 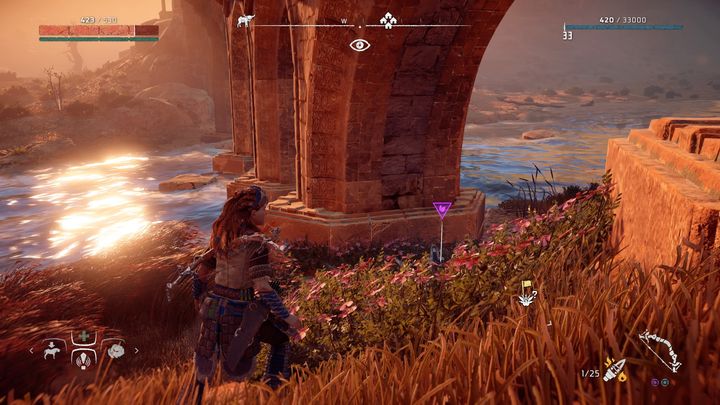 The flower is right under the bridge that leads to Carja territory from the Nora borders. The marker is precise in pointing the flower's location.

Rewards for getting a set

After getting all ten flowers from each set you can exchange them in Meridian for Kudiv's Reward Boxes.