This chapter is a complete guide for the quest connected with Cauldron SIGMA. Here you can find tips that will help you to finish this quest in the most beneficial way.

The quest is added to the journal after speaking with Dral. She can be found in the central part of Mother's Crown. Dral tells you about a peculiar machine that hurt her. Aloy has to go to the place pointed by the woman and investigate the case.

Important: There is no auto or manual saves until you reach the core of the Cauldron. You must reach the boss without any mistakes. 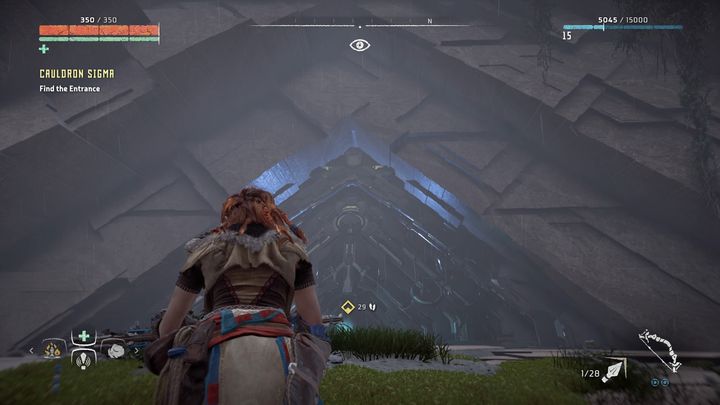 When you arrive at your destination, it turns out that Focus detects an unknown source of signal, hidden inside of the mountain. Before you go through the gates, the same ones as on the picture, you must eliminate a few machines that roams in front of them. It is important to not be detected. Try to eliminate them quietly, starting with the Watchers. When the area is clear, go to the Cauldron's door and open them by using the interaction button. 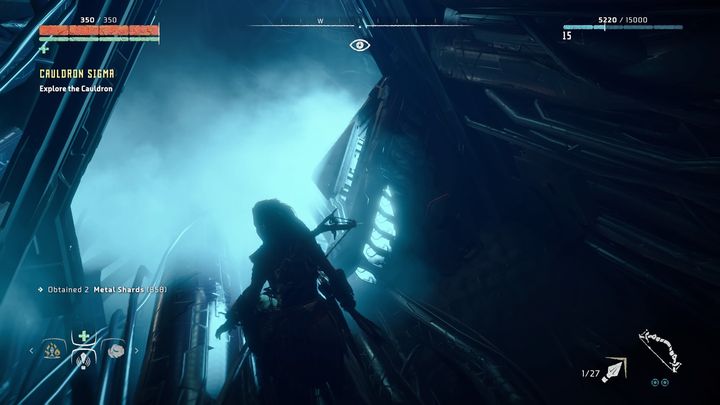 The road leads down and, for a moment, there won't be any enemies. When you are at the bottom, try to neutralize the machines before they detect your presence. Lure Call is very useful here because thanks to that skill you can always easily lure an enemy. By hitting the devices that emits red light you can create a smoke screen that makes the extermination of the machines easier by allowing you to stay undetected. Follow the only path. You quickly reach the passage in the mountains that leads you to the farther parts of Cauldron. 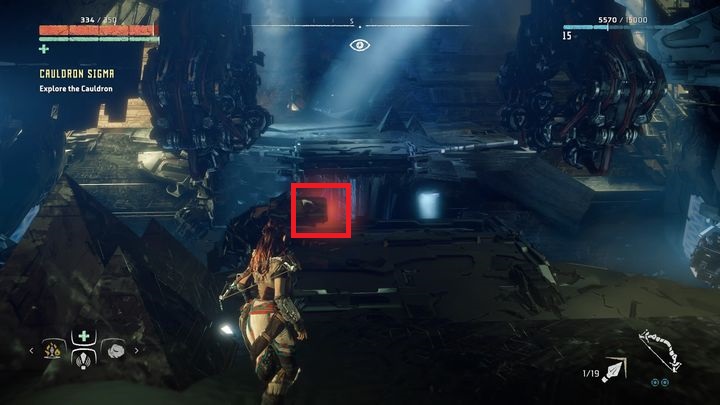 Finally, you arrive at the place presented on the picture. Do not try to jump to the other side and instead go to the sensor and override the data. The path ahead leads further into the Cauldron. Follow the only path. You won't find any enemies on your way and, finally, you get to the next door that also needs to be override if you want to open them. 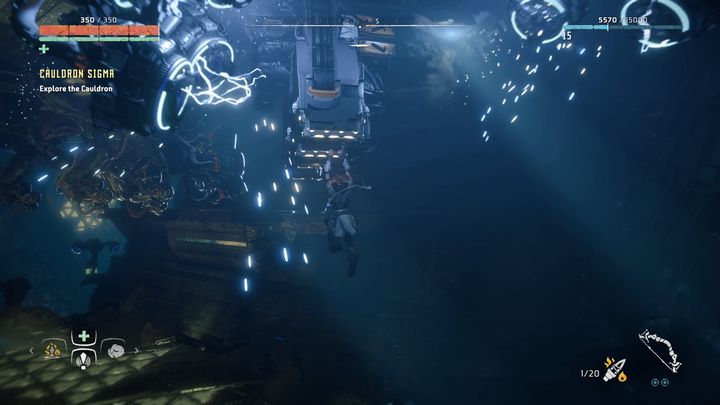 Behind them, you can find the next string of machines that transports containers throughout the entire Cauldron. Stand under one of the containers and jump - Aloy will catch one of the handles. Do not make any interactions until Aloy leaves her mean of transport. On your way you could notice the core of the Cauldron. Getting there is your current goal.

Go to the Cauldron's core

First, get to the area presented on the picture above. Go to the edge [1] and jump ahead, Aloy will catch one of the containers [2]. Wait till you have the ground beneath you and let go of the handle [3]. From here you can climb up to get hidden components or go further and continue the quest [4].

You must defeat a few Watchers and a Shell-Walker if you want to get to the next part of Cauldron. Shoot one of the vents to create smoke screen. Lure Watchers by whistling or throwing stones and eliminate the stealthy. You can try to sneak but it is harder to do because of how many machines are here. The only machine that you can ignore is Shell-Walker because it is rather slow and has a shorter sight. 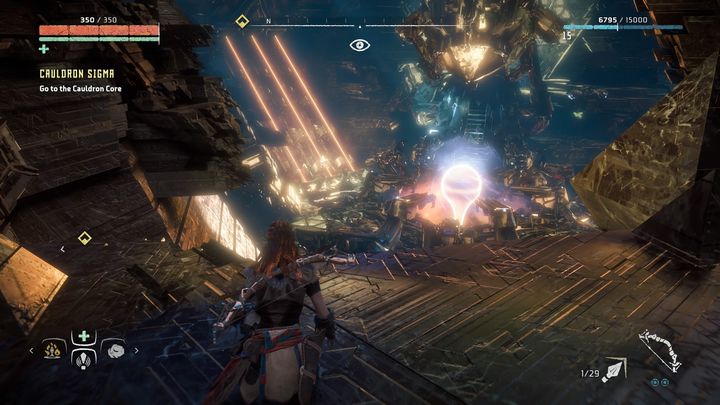 It is important to know that Cauldron's core can only be accessed by using the upper level. Get to the smaller core presented on the picture. On the left there is a catwalk that leads to the upper level. Follow it.

On the upper level you will quickly reach a dead end. On the left there is a bridge that can be opened after you override it and if you go a few steps ahead then, on the right, you can find a stash that contains a freeze weapon upgrade. Use the newly created bridge to get to the other side and head to the core. Shortly, you must jump to a lower platform and use a cable to slide down. After a short climb, activate another bridge and enter the core's chamber. 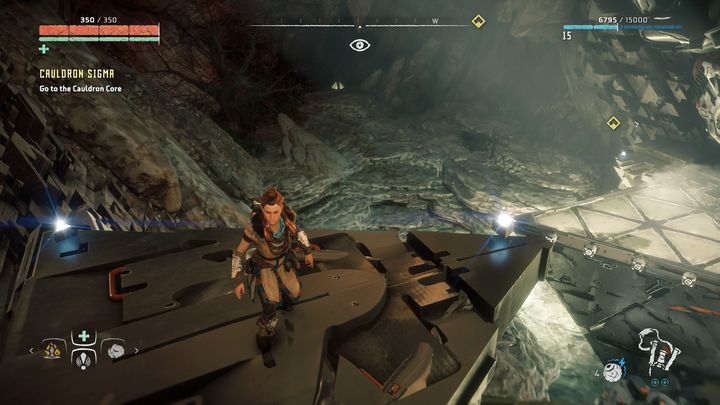 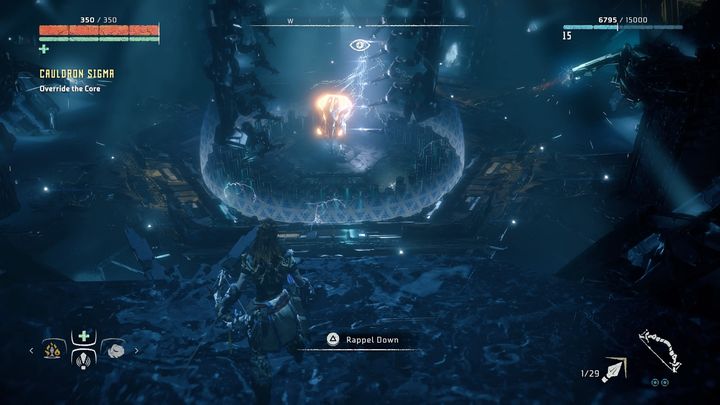 After that the game is saved and you must face Fire Bellowback. But before the fight begins, you should eliminate two Watchers that patrols the area. 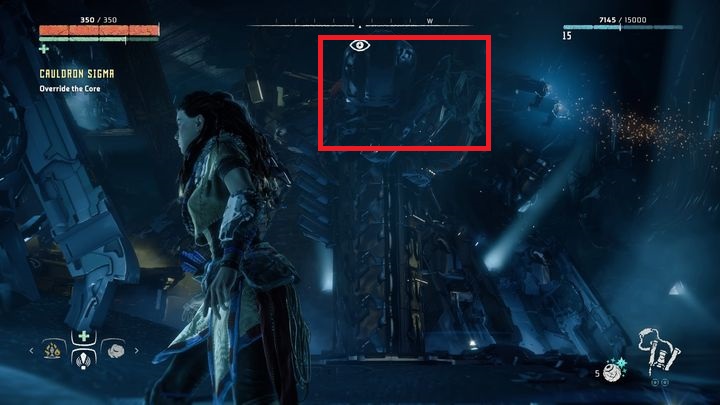 Every weapon is useful against this enemy but the best choice is to use shock traps. After two traps the big machine falls to the ground which allows you to deal damage and do a critical strike. After that, the machine gets up but you have already placed another trap. You don't even have to keep a particular distance. After the fight, search nearby stashes because you can find unique modifications that can be useful in the later parts of the game. 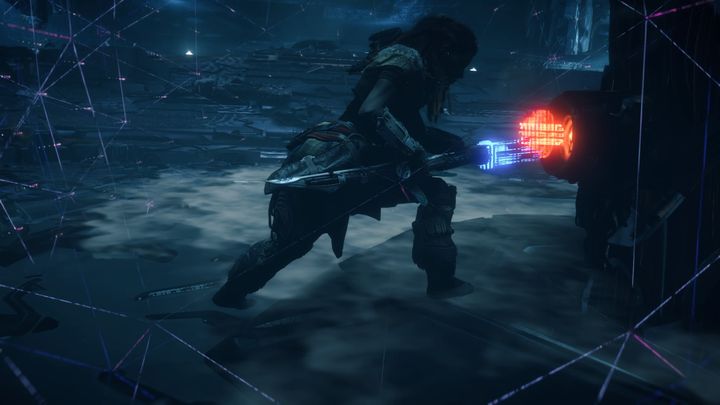 When you defeat Fire Bellowback, override the core. Thanks to that you can learn SIGMA override which allows you to take over new machines. The mission is completed and the core goes up to the Cauldron's chamber, the same one in which you started your exploration.