In this chapter you will find advice related to the world map.

Characteristics of the map

The game world is divided into a few story regions to which you gain access by completing the main plot. The early hours of the game are limited only to the area in which Aloy grew up. Then you will gain access to the whole area controlled by Nora tribe. After completing some quests you will gain access to the whole world, although unknown areas will be hidden behind a fog on the map. You can reduce it by visiting these areas or by synchronizing data with the Tallnecks of the areas.

On the map you will find machine nests, human settlements and various ruins that are the remains of ancient civilization. On the map there are also areas controlled by corrupted machines, hunting grounds and bandit camps. The map has interactive points - camps to which you can move by using the quick travel if a fire is marked with green color on the map (it means that you were close).

The merchants from beyond the Embrace can sell you maps integrated with the world. Map They allow you to learn the location of Vantage points, Ancient vessels, Metal flowers and Banuk figures. During the exploration you will also find various notes related to the ancient civilization. However, they aren't marked on the map by the creators and you cannot intervene in it (for example by buying a map from a merchant).

Description in the guide 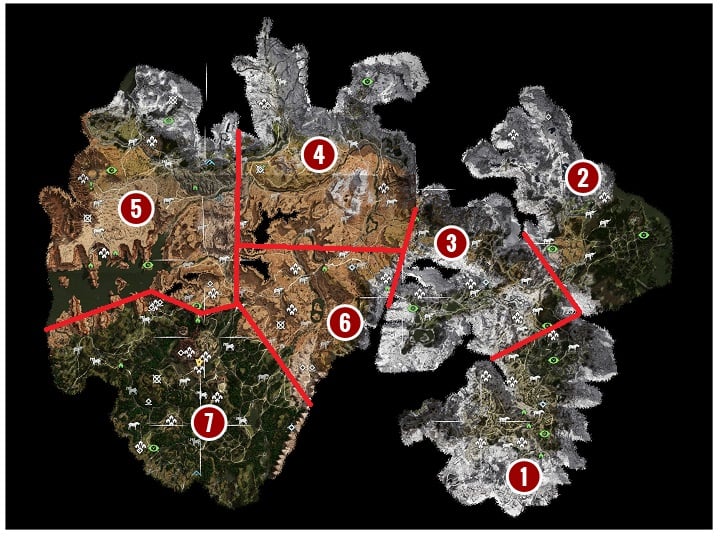 Due to the size of the map, in order to describe it we had to divide it into smaller areas. In each of them you will find detailed information about quests that can be started or completed there.