This page of the Horizon 2 Forbidden West game guide contains a walkthrough of The Second Verse side quest. This is a personal quest commissioned by your companion, Zo. The following guide explains how to initiate Zo's quest, how to get the Grimhorn cores, how to help the machine-gods Do, So and Ti, and how to defeat the Stormbird. 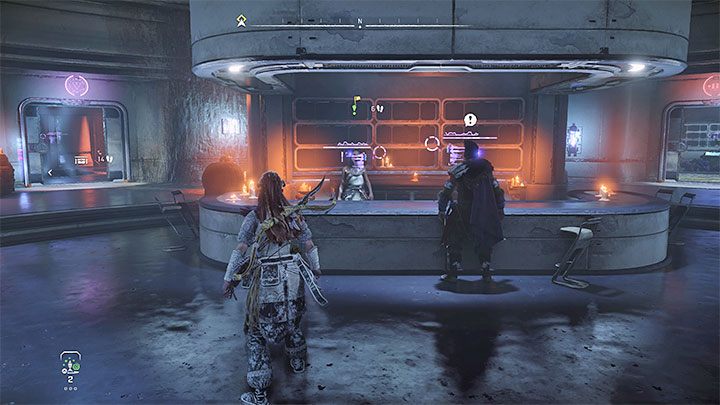 Zo will give you this quest. You'll be able to unlock it once you've completed the Cradle of Echoes main quest. You'll see a green exclamation mark in the Base indicating a side quest. 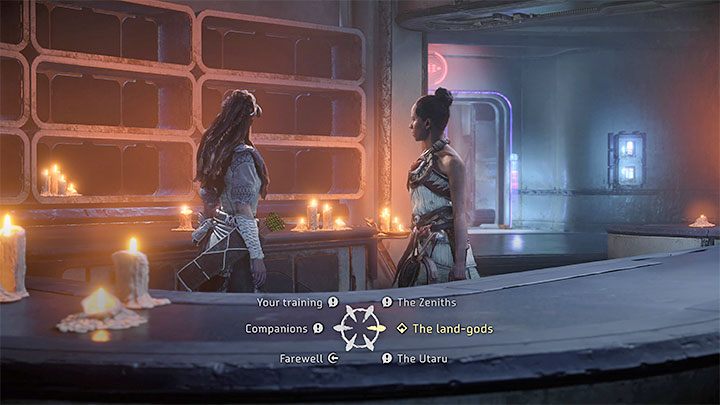 Speak to Zo and choose to discuss the Land-Gods (the right dialogue option pictured above). This will initiate her personal quest.

Since the battles will be quite challenging, you should get Aloy to at least level 25, which is the recommended level for this quest.

Call Zo at the campfire 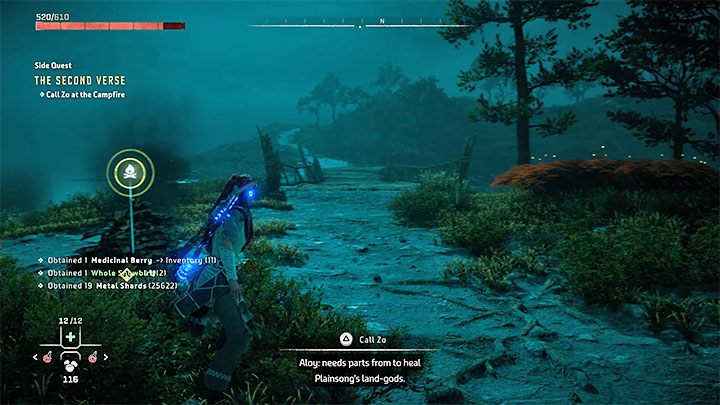 Once said task has been added to your journal, you need to reach the indicated campfire on the world map. When you get there, approach the campfire and press Triangle to invite Zo to come to this place.

Go to the Grimhorn site 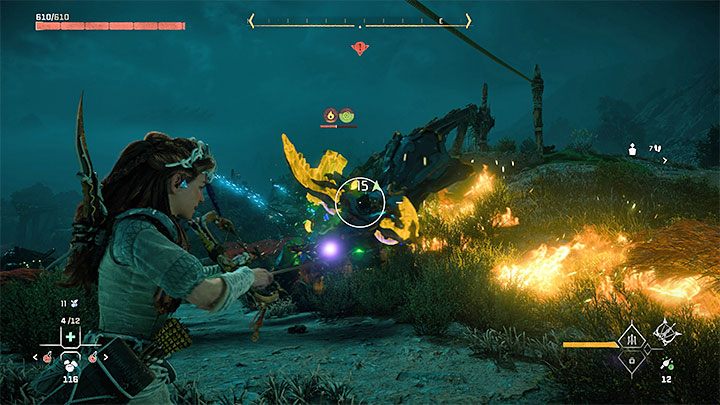 Follow Zo to the indicated site. Once you get there, you need to destroy all the machines in the marked area. It might be a good idea to eliminate the flying machines first to prevent them from landing easy strikes on Aloy later in the battle.

You need to be on your guard, because the site contains Apex Grimhorns, which are stronger than the standard "version" of the same machine. Make sure to use the correct elements (water and acid), to effectively dodge the attacks of the Apex machines and to accurately hit their weak spots. 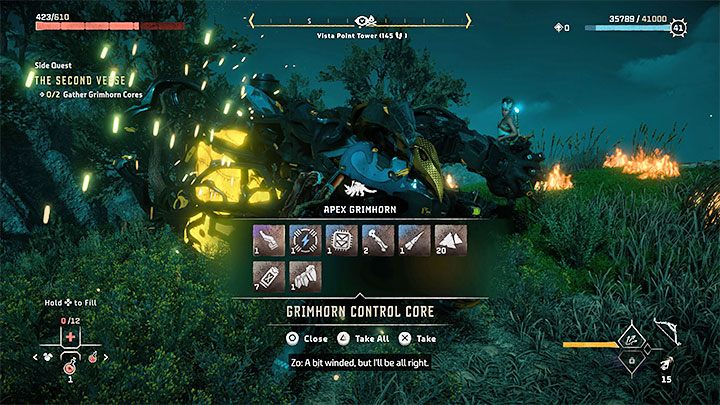 Once the fight is over, approach the fallen Grimhorns. Search their bodies - in addition to the regular loot, you'll find some sought-after Grimhorn Control Cores, of which you'll require two. With the cores you've obtained, reach Zo and hand them over to your companion.

You can immediately use the fast travel option to return to the Base. During your conversation with Zo, discuss healing the Land-Gods. You will receive several new quest objectives.

Go to the shrine at the Canyon - the god Do 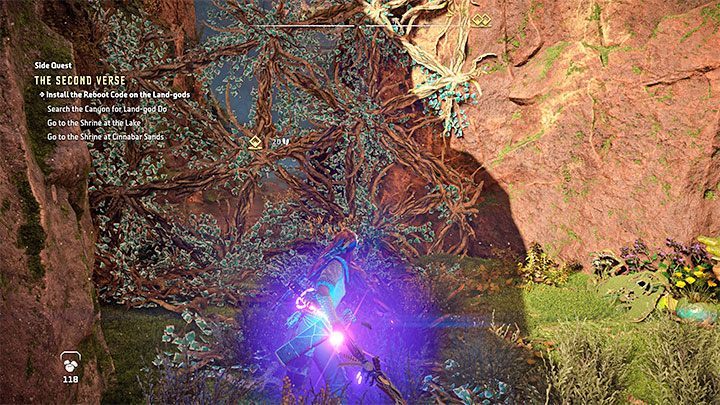 3 new locations will appear on the world map, which you can visit in any order. The Canyon is a location northwest of Plainsong.

Next to the discovered shrine is a metal flower. You'll only be able to open and destroy it after completing the Seeds of the Past main quest, as you will need the Vine Cutter to do so. 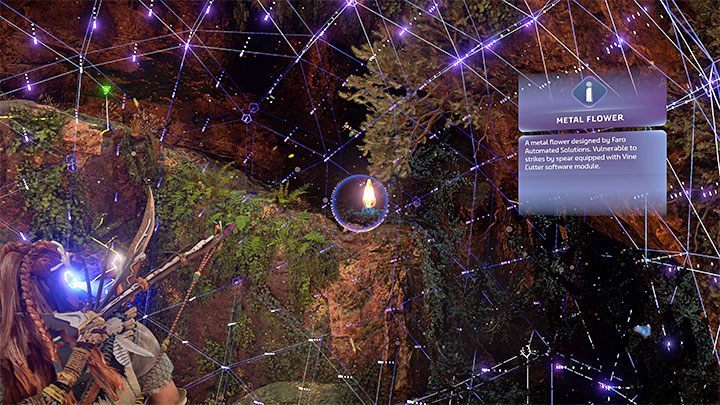 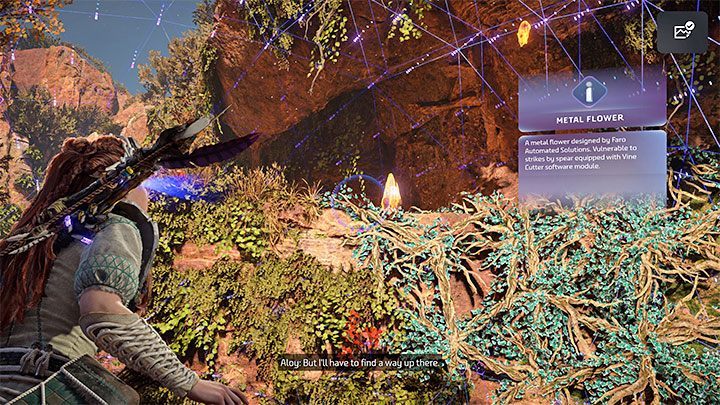 Complete the rock climbing section. You will reach an inactive machine covered in vines.

There are two more metal flowers (pictured above) in the next area; first use focus mode to locate them, then jump/climb up to the ledges that contain them, open them, and clear off any additional vines. 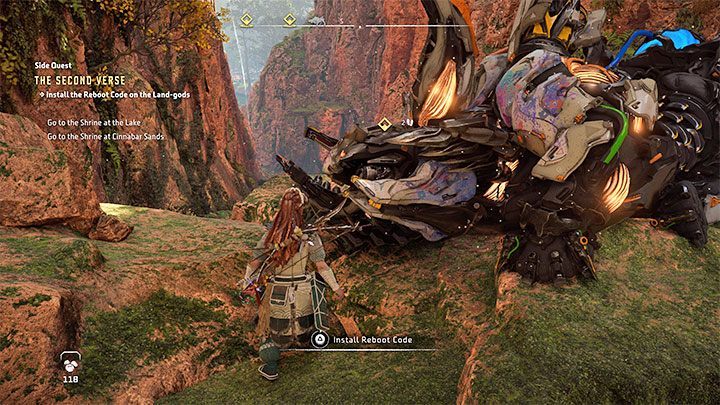 After getting rid of all the vines, return to the Do machine. Upload the Reboot Code.

Go to the shrine at the Lake - the god So 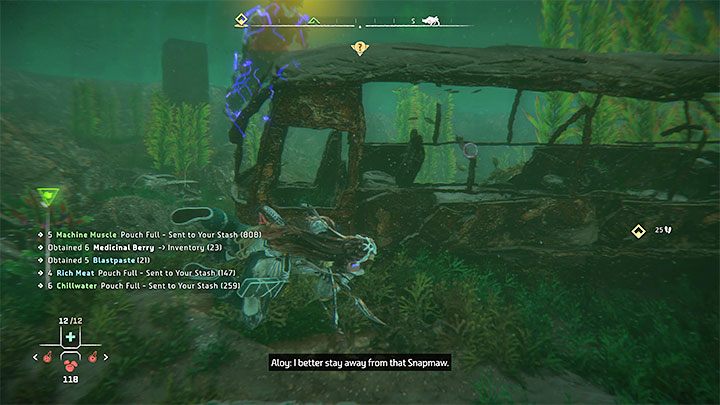 The Lake is a location southwest of Plainsong. After finding the shrine, you need to jump into the lake and dive in. Since you will be exploring the depths for a long time, you'll require a diving mask, which you can get in The Sea of Sands main quest. Aloy will be able to stay underwater without restriction.

While exploring the lake, you need to avoid the Snapmaw swimming underwater - use the sonar to locate it and keep a safe distance or hide in the plants growing from the lake-bed. 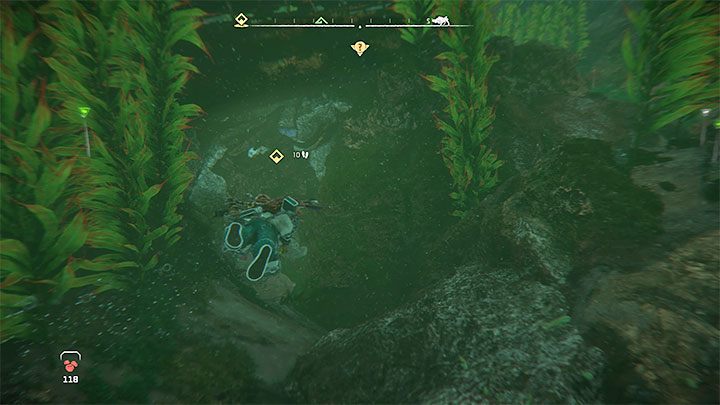 Explore the lake-bed to find the So machine. Swim up to it and interact with it to enter the Reboot Code.

Go to the shrine at Cinnabar Sands - the god Ti 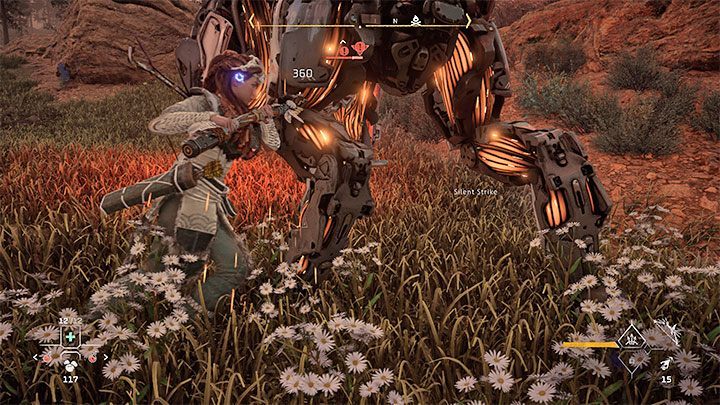 You'll find the area with the shrine south of Plainsong, in the Cinnabar Sands. Next to the shrine, Aloy will find two dead Utaru and you can optionally examine the bodies more closely.

You will be forced to deal with the new machines in the area. You can use the fact that the game allows for a surprise strike to your advantage. 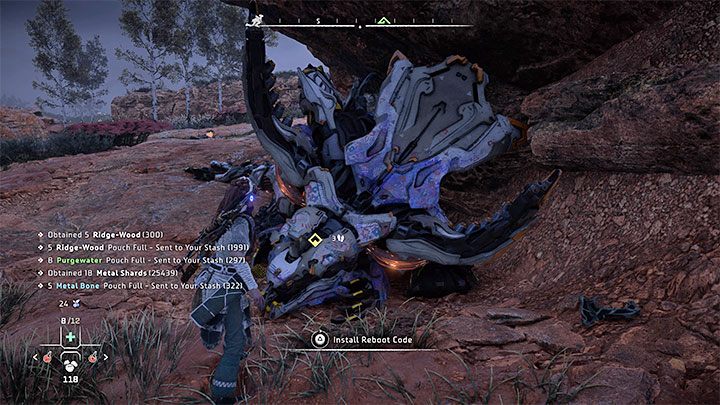 After the battles are over, locate the Ti machine lying on its side. Try to upload a Reboot Code. 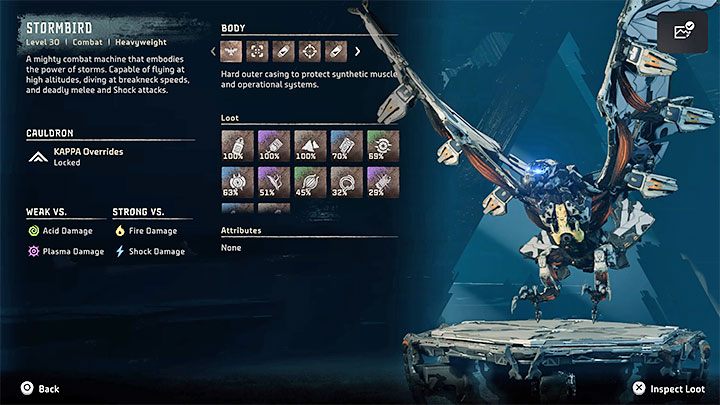 A giant flying machine called the Stormbird will appear and, as always, it's a good idea to scan it, especially if you haven't encountered one yet in the game.

From the machine's description, you will mainly gleam that the Stormbird's weaknesses are acid and plasma. You can also check out all the unique elements on its armor. 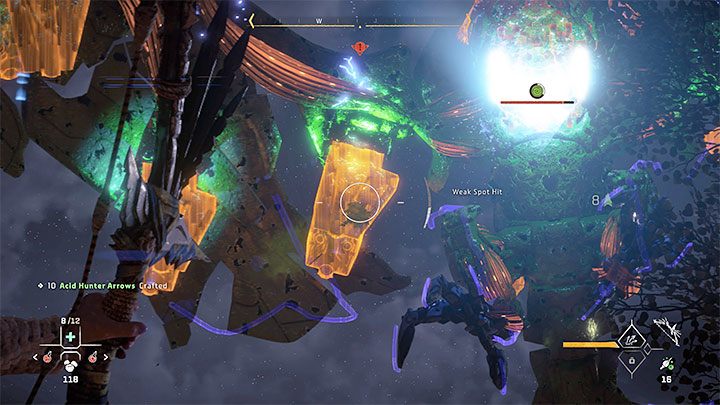 Once the battle begins, try to stay on the move to avoid becoming an easy target for the Stormbird. Use the correct elements and target the weak spots located on its wings and chest, among others. 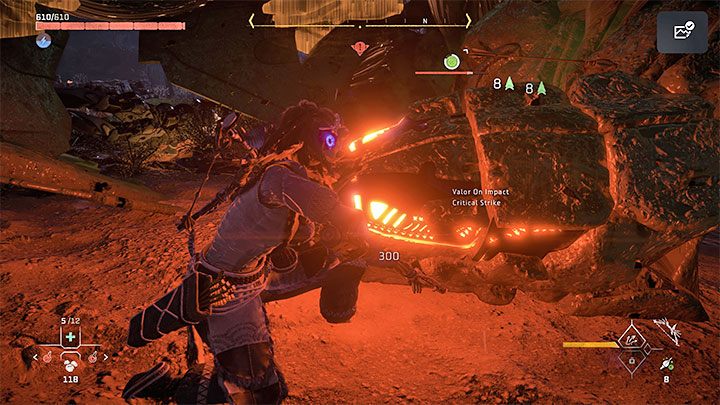 If you manage to stun the Stormbird, it will fall to the ground, giving you an opportunity to run up to it and land a critical hit (or several) with your spear. If the machine has crashed too far away to reach it in time, then at least make use of this opportunity to target its weak spots with ranged weapons.

After the fight, don't forget to examine the Stormbird's main body, but also make sure to search for any components that may have fallen off while it was flying. Return to the Ti machine. This time, you will upload the reboot code successfully. 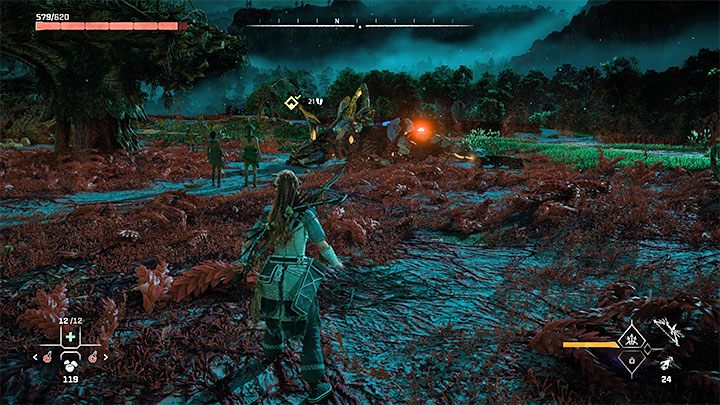 You should hear from Zo shortly after uploading the code to all 3 machines. Go meet her in the fields east of Plainsong. As an additional reward for completing the quest, you'll get to listen to the song of the healed god.

Despite officially completing the quest, you should meet Zo once more at the base. You will receive a unique gift from her - the Utaru Warden infiltrator outfit. Additionally, when you return to Plainsong later in the game, Aloy will comment on how helping the machines resulted in the revival of this location.