This page of the guide to Horizon 2 Forbidden West contains a walkthrough of all the hunting trials in the Hunting Grounds: Sheerside Mountains. You will learn where the mountain hunting grounds are, how to prepare for the Sheerside Mountain trials, what to do in each challenge and how to get the highest possible rewards.

Location of the hunting grounds in the Sheerside Mountains 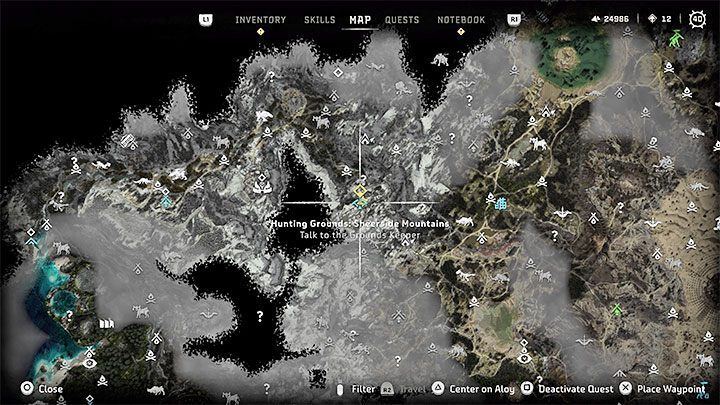 The recommended level for this activity is 20. Make sure to reach it, or at least get close to it, because you'll face cone stronger machine types in these trials.

The hunting grounds are located in the mountains, in the northern part of the map. They are next to the Stone Crest settlement. 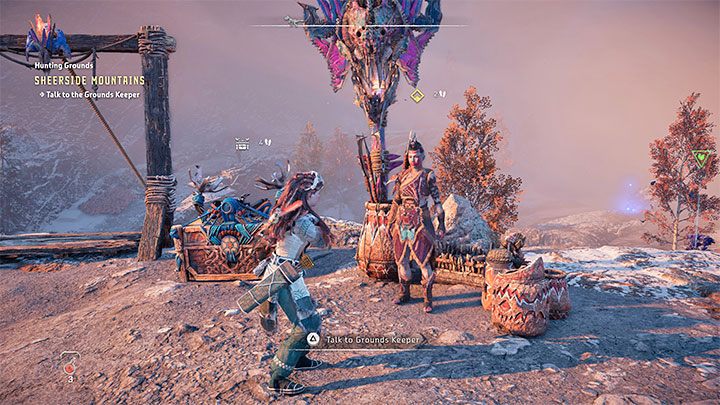 You can find a trader there who sells ranged weapons, some of which may come in handy during the trials.

To start the trials, you must talk to the Grounds Keeper. As usual, there are 3 trials to complete, and you can earn up to 3 types of Stripes in each one. 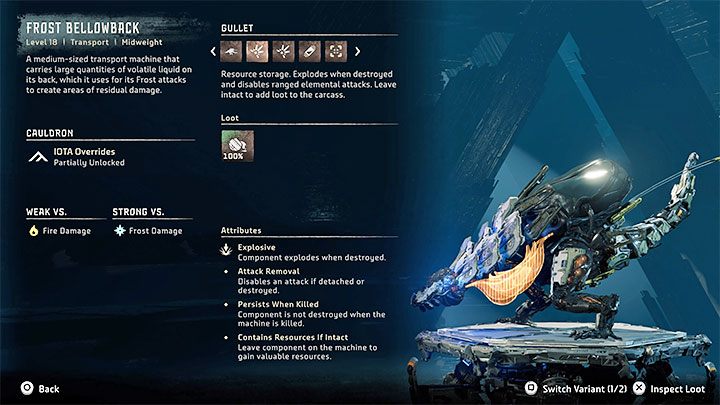 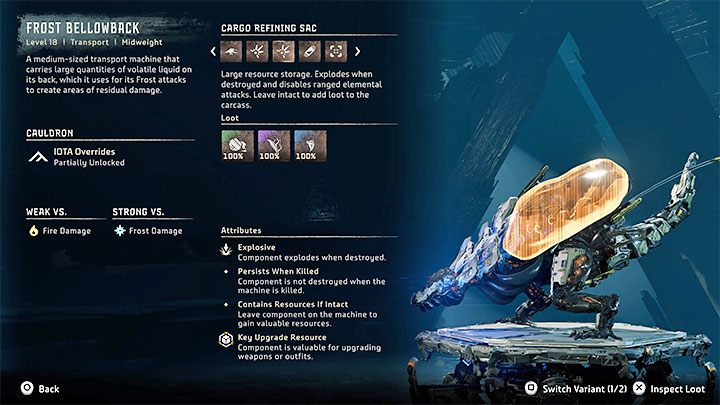 In this trial, you have to attack Bellowbacks with Frost Ammo to put them in a Brittle State. Once they are in this state, Aloy must destroy their cargo refining sacs. To get the highest reward, you must destroy 3 Bellowback sacs in less than 3 minutes.

We highly recommend scanning any Bellowback before starting the trial and carefully reading its card in the Machine Catalogue. Contrary to what the trial description may suggest, you will be able to destroy two types of the Bellowback's components. These are:

Each such component is counted separately, so destroying a gullet and a cargo refining sac on the same Bellowback will earn you 2 damage points out of the required 3. 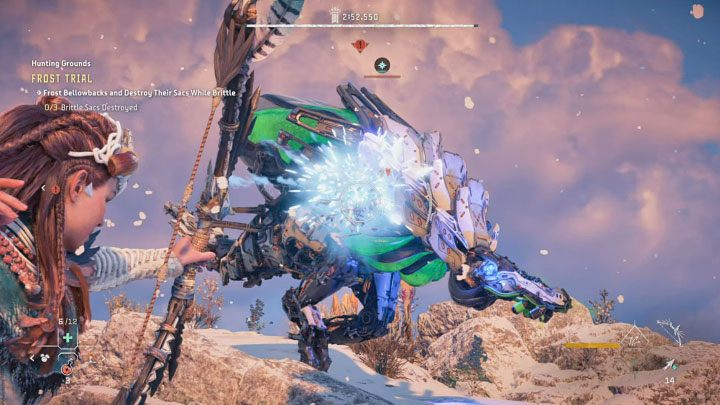 To pass this trial, you will need a weapon that deals frost damage. Once the trial begins, move towards the nearest Bellowback. Weaken it with frost ammo. 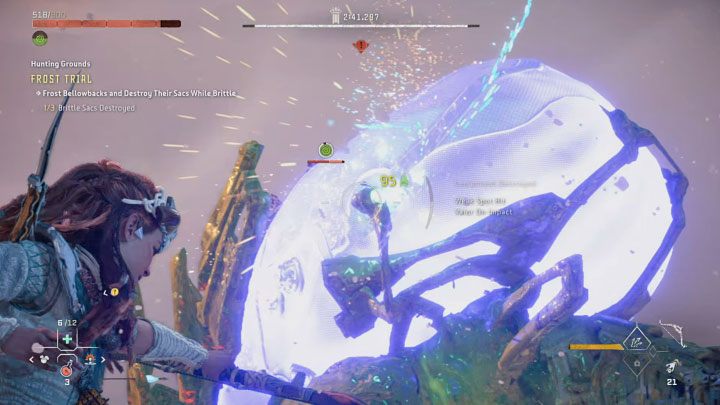 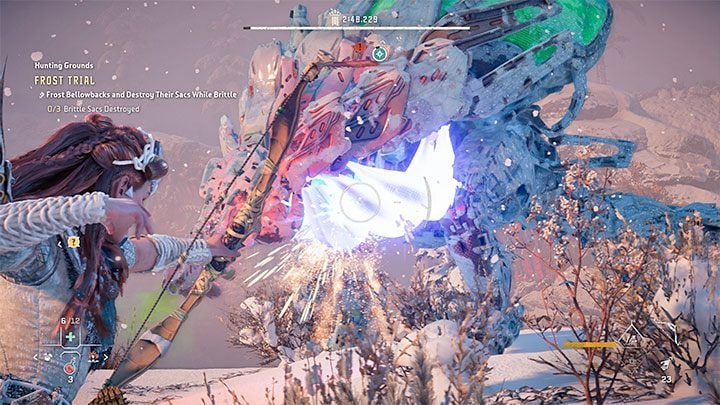 When the Bellowback freezes, quickly switch to a weapon you have that deals the most damage to deastroy the machine's components. Track the components mentioned above. Try to destroy at least one of them before the Bellowback comes out of the fragile state. 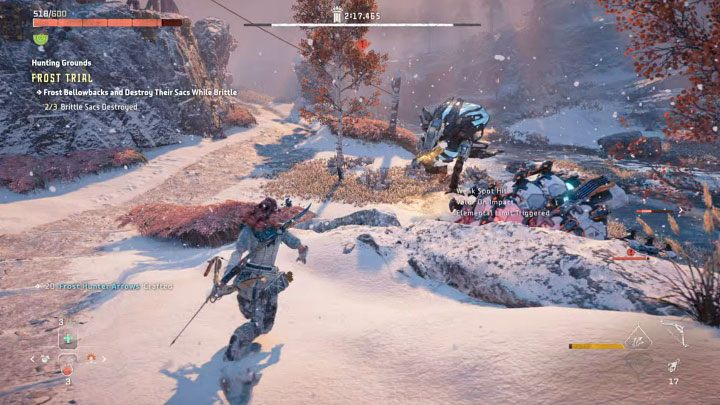 If you didn't manage to destroy both components of the Bellowback, start using frost ammo again. After getting rid of both parts, stop attacking the first Bellowback for now, and look for the second one. Here, after putting the machine into a fragile state, you can already choose a component to attack; the gullet should be easier to destroy.

Try to avoid the Bellowback's and other machines' attacks throughout the trial. You will pass the trial after destroying the third component (assuming the Bellowback has remained in the fragile state). You don't have to kill the machines to win the trial. 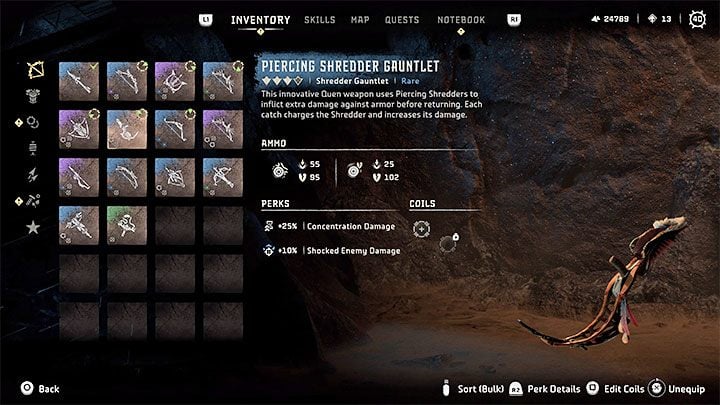 This trial involves using a weapon called the Shredder Gauntlet. Use it to hit an enemy machine three times with the shredder, and catch the returning shredder each time to recharge it. Once the shredder is fully charged, Aloy must hit the machine again and cause an explosion that will deal massive damage. If you want to get the highest reward, you must do this 2 times in less than 2 minutes.

You can use any Shredder Gauntlet to pass this trial. You can find one of them at the trader's in these hunting grounds. 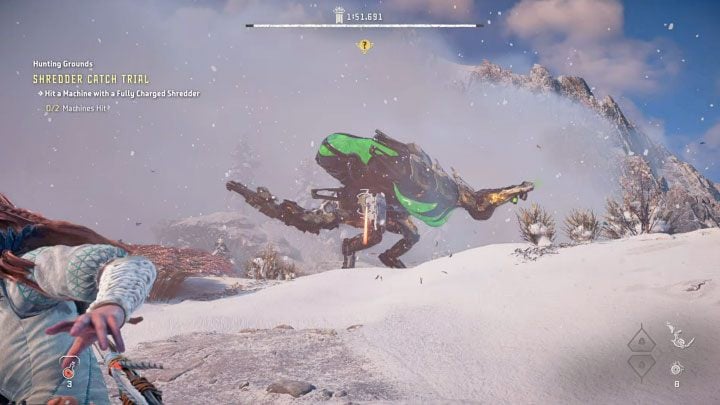 To complete the trial, select any machine, e.g. a Bellowback. Aim the Shredder Gauntlet at the machine, charge the shredder and release it. 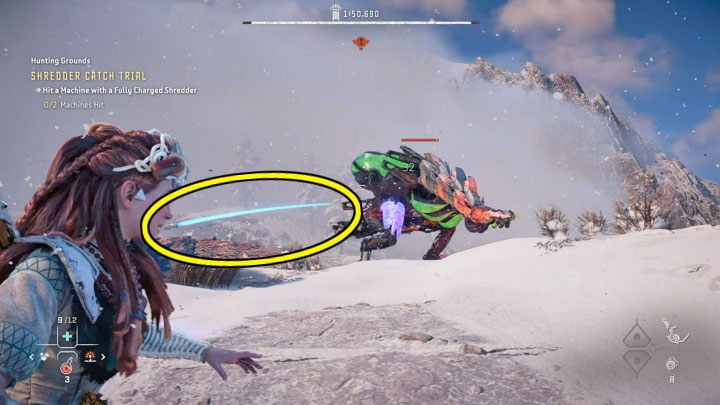 The key to success is to catch the shredder after it hits the machine and returns towards Aloy - you may have to move to the side to make sure the shredder doesn't pass you. Fortunately, you don't have to press any button to grab the shredder. Aloy simply has to be in its trajectory when the shredder returns. 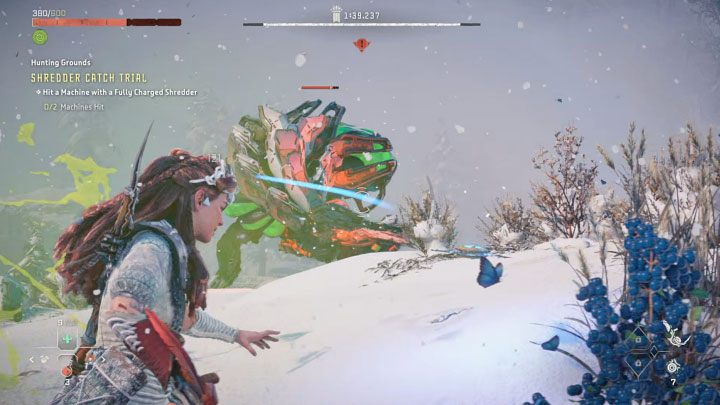 Additional hint: Concentration may help you catch it. Bullet time will allow you to easily determine the shredder's trajectory and stand in the correct spot. 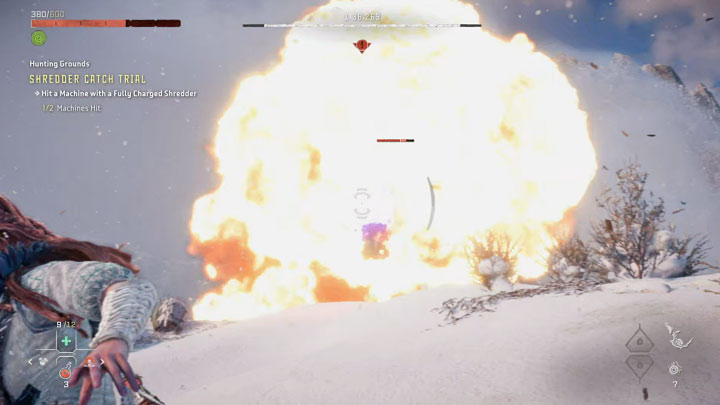 You have to throw and catch the shredder twice. The next shredder throw should cause an explosion that deals serious damage, and if you have executed the sequence correctly, this will count as the first of the two required attacks.

You now have to repeat all the previous moves - hit the machine three times with the shredder, catch it three times, and release the charged shredder to cause a second explosion. You can keep attacking the same machine, as long as it's not destroyed. 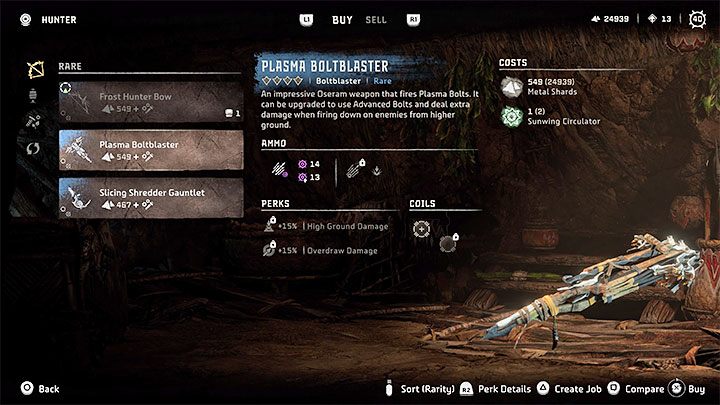 In this trial, you have to attack a Rollerback with Plasma Ammo to put it into a Plasma Blast State. Aloy must then fill up the damage bar before the countdown ends, and the Rollerback explodes with maximum force. If you want to get the highest reward, you must do this 2 times in less than 2 minutes.

You will need a weapon with plasma ammo to pass the trial - one of such weapons should be available at the trader's at the hunting grounds (image above). 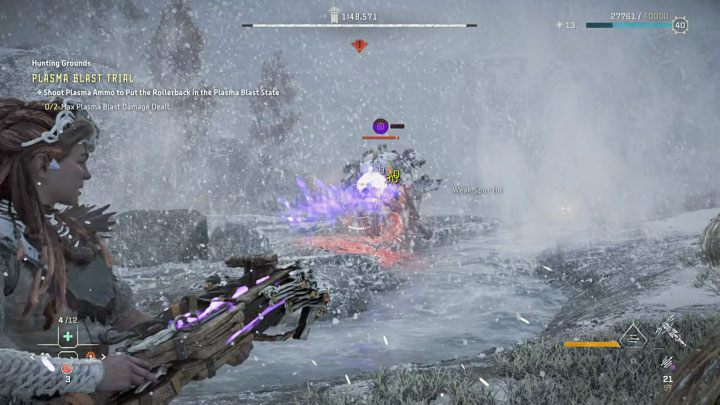 Once the trial begins, run as fast as you can towards the Rollerback, because the time of the trial is very limited. Use plasma ammo weapons to attack the Rollerback and gradually lower its resistance. 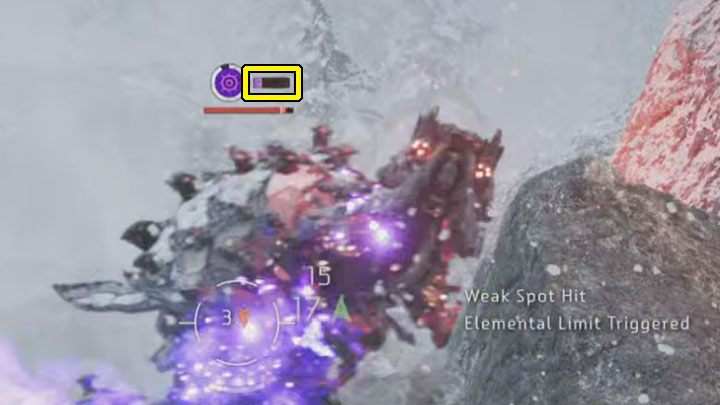 When the Rollerback enters the Plasma Blast State, you will be able to start filling up the bar next to the plasma icon - see image above. 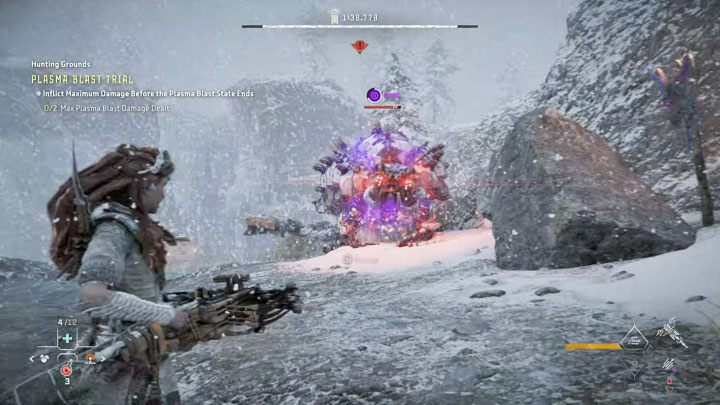 You must fill the bar quickly before the machine explodes. To do so, you can keep using your current plasma ammo weapon, or quickly switch to another one from your inventory that's good for fast and powerful attacks (e.g. Warrior Bow). 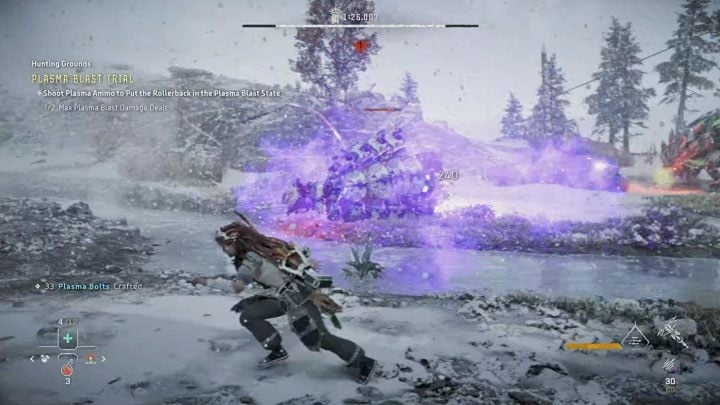 If you managed to fill the bar, you should get the first of the 2 required points at the moment of the explosion.

During this trial, you of course have to avoid the Rollerback and other machines that will attack you with quite a force. Dodge a lot and try to avoid getting knocked down and thus losing precious time.