This page of the Horizon 2 Forbidden West game guide contains a walkthrough of the Cradle of Echoes main quest. The following guide explains how to unlock the quest to investigate the outpost in the mountains, where to find Beta, how to solve the puzzle that involves opening the capsule and how to defeat the Specter. 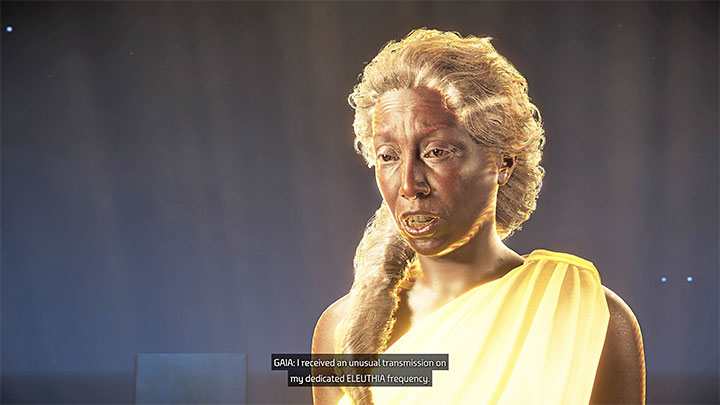 You will unlock this quest once you have recovered one of GAIA's functions - AETHER, POSEIDON or DEMETER. During your conversation with GAIA at the Base, you will learn that a suspicious transmission has been received and you will be sent to investigate the source of the signal in the mountains.

After unlocking this quest, all other main quests will be paused and you will be unable to freely explore the world. You need to complete the newly received quest in order for the other quests and activities to become available again. To start the journey, meet up with Varl and Erend at the base exit and confirm that you're ready to set out. 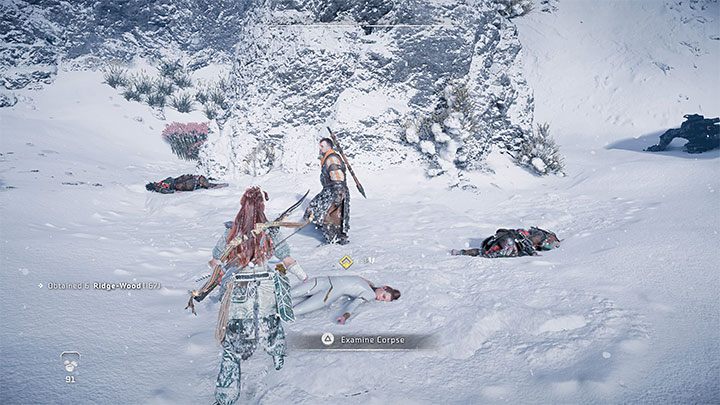 After watching the cut-scene from the battle in the mountains, approach the Zenith's corpse. Through examining them, you will determine that the rebels managed to break through Verbena's energy shield. 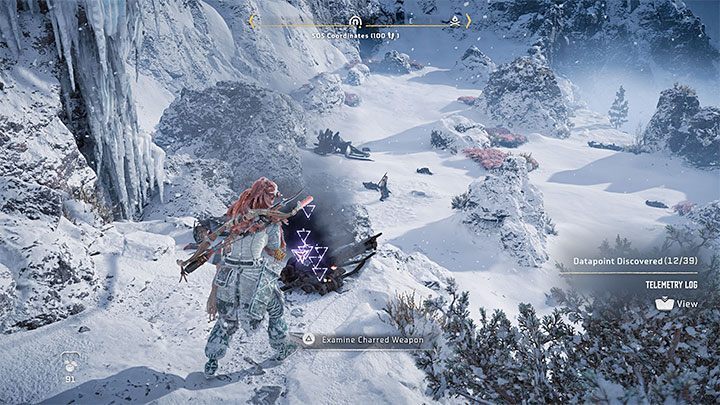 Focus mode will help you search for things to investigate - it will tag these spots purple. Examine the destroyed Specter, the body lying behind the bushes, the camping equipment in the camp, and the charred weapon used by the rebels to attack the Zenith. You will return to the last item in the final part of the quest.

After searching the area, return to Erend and then reach the large hole in the ground next to where Varl is standing. 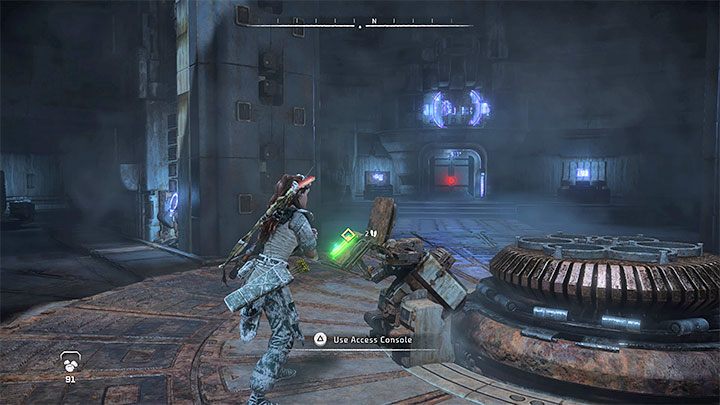 Enter the large hole and you will eventually reach an underground complex. Aloy's attention will be drawn to the central processor and you need to reach it to examine the access console more closely. You will discover that you are in the Ninmah Research Lab.

Search the facility for the Asset 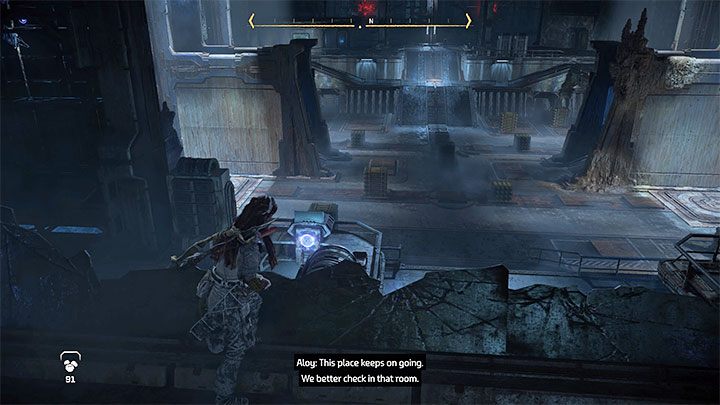 The main route through the outpost is linear, but along the way you can look around for optional loot to stash into your inventory. One of the safes contains especially valuable loot. 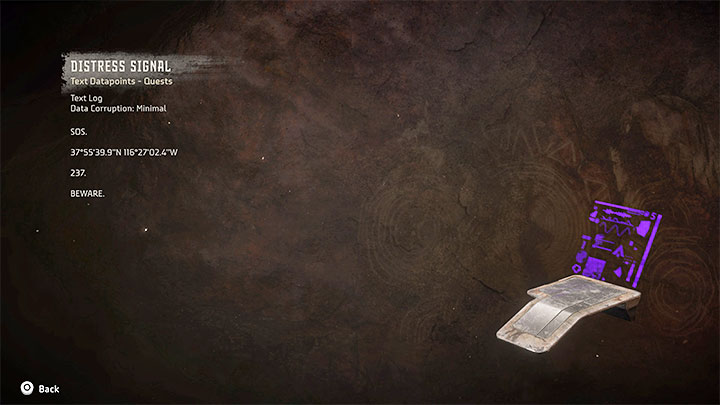 The main route will lead you to a console where you will need to input a code. This is a simple puzzle, the solution to which is found in a message received at the very start of the quest. You can also find the SOS note with the code in your inventory. 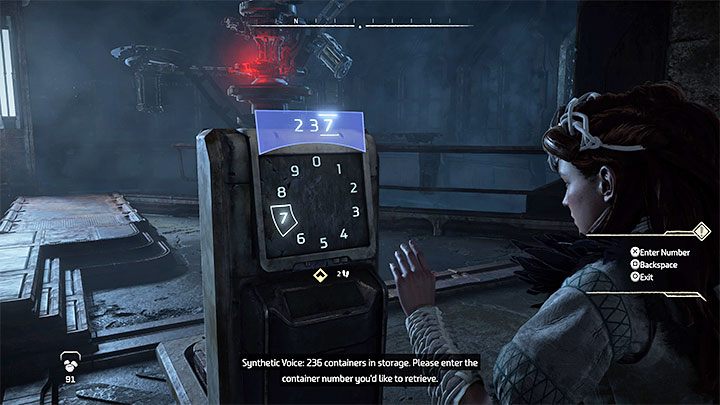 The correct combination is 237. Once you enter it, a capsule will appear containing Aloy's clone, Beta. 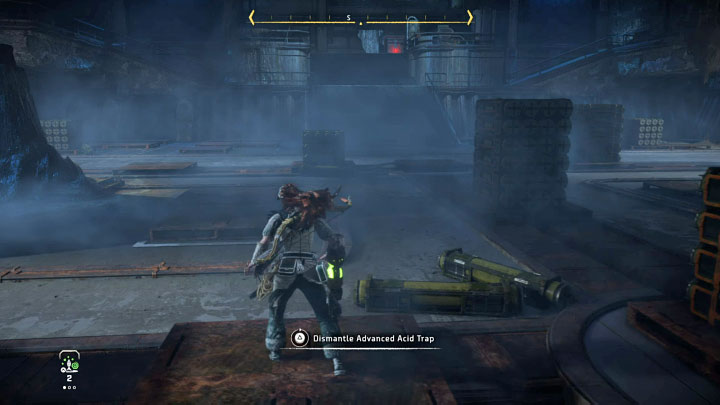 After watching the cut-scene with Beta, you'll be warned that the first Specter, a type of elite machine, is approaching. While waiting for the Specter to arrive, you can set up traps in the central hall - acid traps will work especially well in this situation. 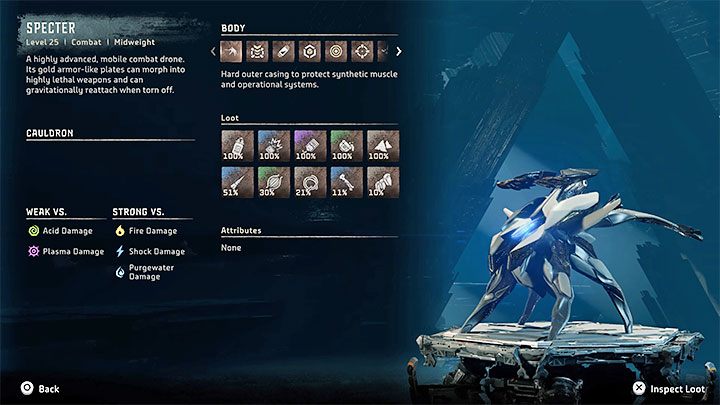 Once the Specter arrives, it would be a good idea to scan it in focus mode to add a new entry to the machine catalogue. You can check it out to learn about the unique parts of Specter's armor, and to find out that it's weak to the acid and plasma elements. 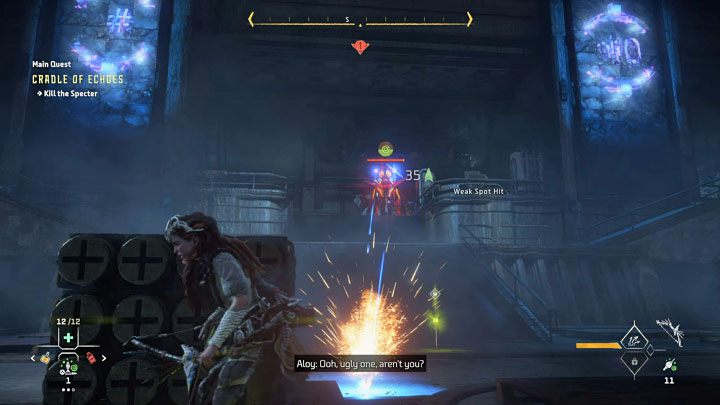 To begin with, use projectiles utilizing the elements mentioned above, but tear arrows, which can tear pieces of armour off machines, will also prove effective.

During ranged combat, the Specter uses cannons. Hide behind cover or run/jump aside. 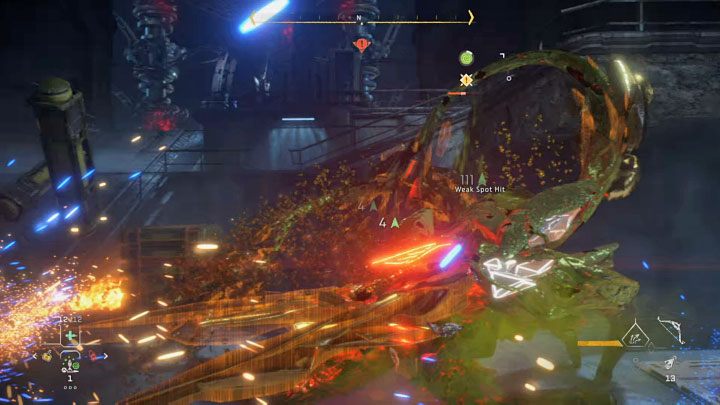 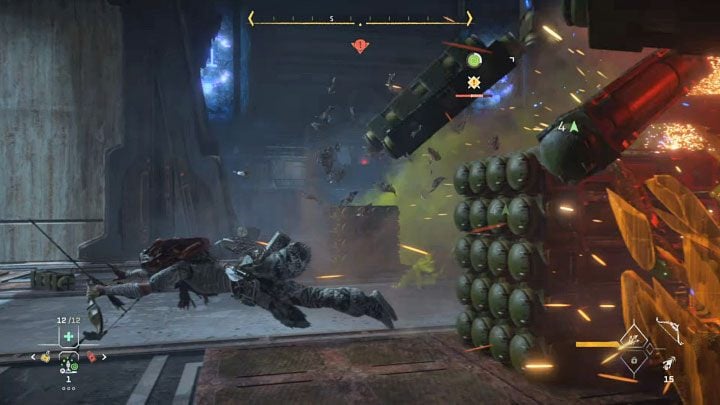 When it comes to melee combat, the Specter can use strong sweeps and a charge of sorts. In both cases, the universal tactic is to jump aside to reduce the risk of taking damage.

Continue fighting until the Specter's health points drop to zero and don't forget to loot it afterwards to obtain its valuable drops. 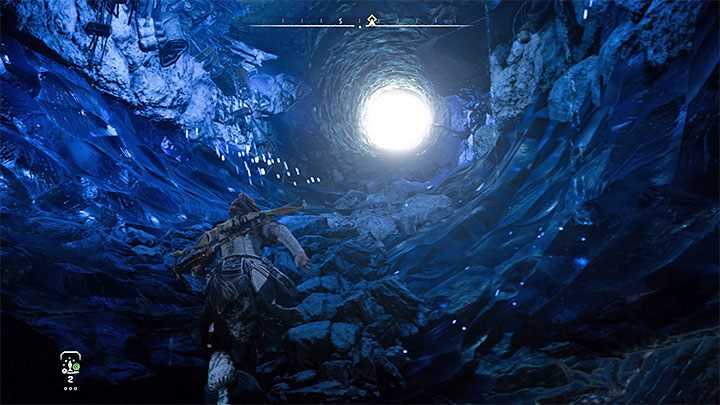 You need to return to the large tunnel which you had previously used to enter the facility. Upon returning to the surface, you will learn that a second Specter has appeared. 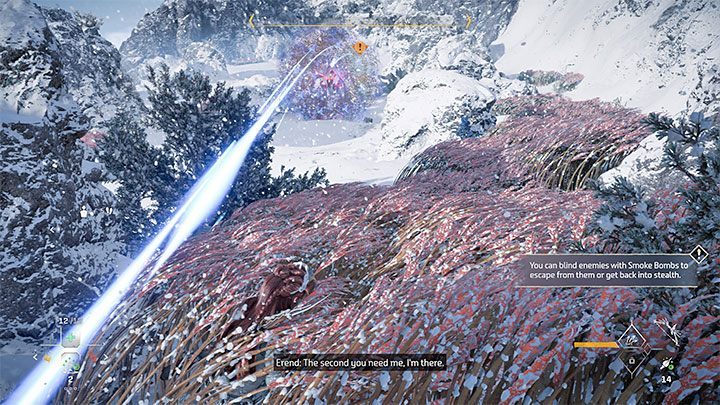 The battle against the second Specter is made more difficult because of its large energy shield, which is on by default. You need to land a surprise attack on the Specter. Head to the right and continue sneaking towards it while hiding in the tall grass. 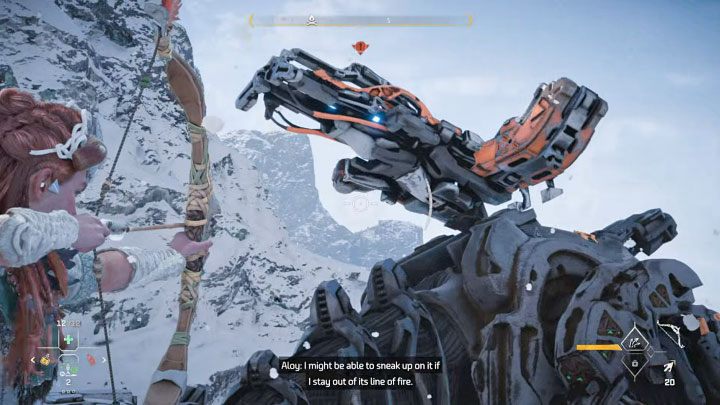 Eventually you will reach the wreck of the Ravager. Notice that it still has a heavy weapon on its back, namely the Ravager Cannon. Use any ranged weapon to hit the cannon and cause it to fall off. 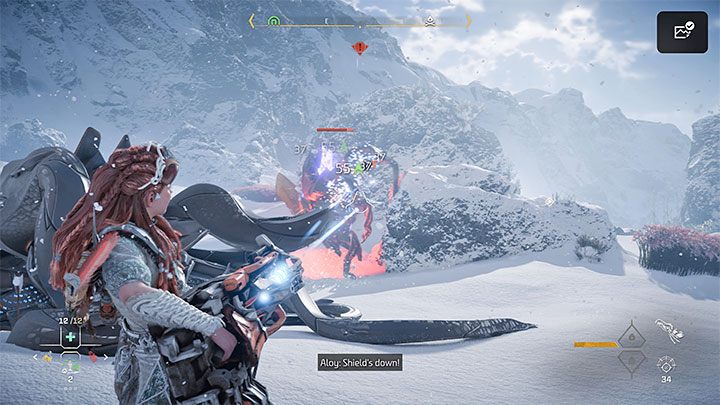 Grab the heavy weapon and start attacking the Specter until your ammo runs out.

Switch to the weapon in Aloy's inventory that shoots acid/plasma projectiles, then continue attacking and dodging just like in the previous fight and you will eventually best the second machine. 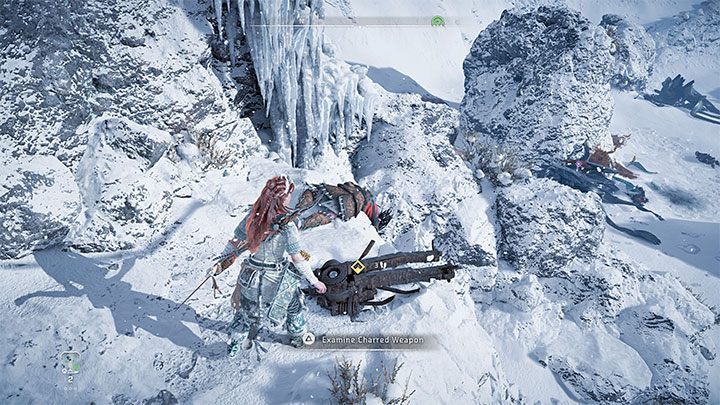 After the cut-scenes, you need to return to the damaged weapon remaining on the small hill. You can now safely investigate it by pressing the interaction button. The characters will automatically return to the Base.

Talk to Varl and the Clone 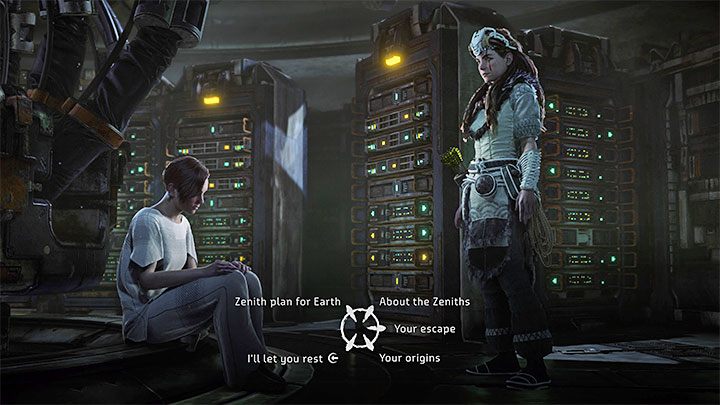 To meet Beta the clone, you need use the stairs leading to the lower level of the Base. Reach the indicated door. Aloy will go inside after the conversation with Varl. During the meeting with Beta, you can ask a number of optional questions. You can also postpone the meeting with Beta until later in the campaign - she will stay in the same room.

You can complete the quest by reaching the domed room and having a conversation with GAIA. The game will unlock all the other quests and you will be able to freely explore the world map.