On this page of the guide for Horizon 2 Forbidden West, you can find a beginner's guide prepared for people who are just starting the adventure with this game. The following hints and tips are related to, among other things, exploration, combat, developing Aloy and keeping her alive.

Collect all the loot you find 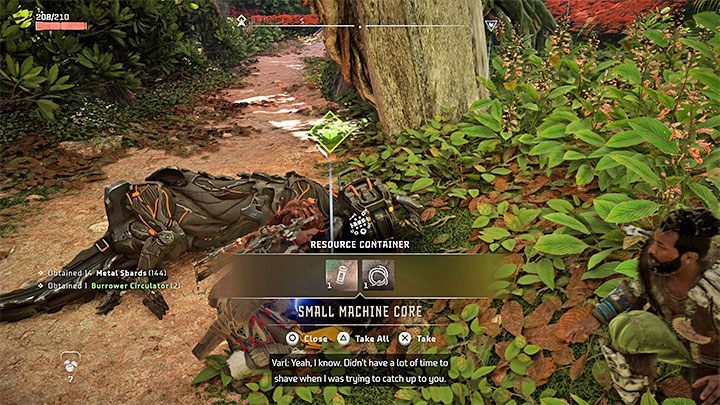 You will find plenty of loot during the game - it can lie in plain sight, stored in containers, be as remains of destroyed machines and the bodies of defeated enemies, etc. Always choose to take all loot instead of individual items.

Aloy's inventory has a limited capacity, but all items acquired beyond the allowed limit are automatically moved to the stash - you can get them out at any time. In addition, you can sell all unnecessary items to merchants and thus get metal shards you can then spend on other things. 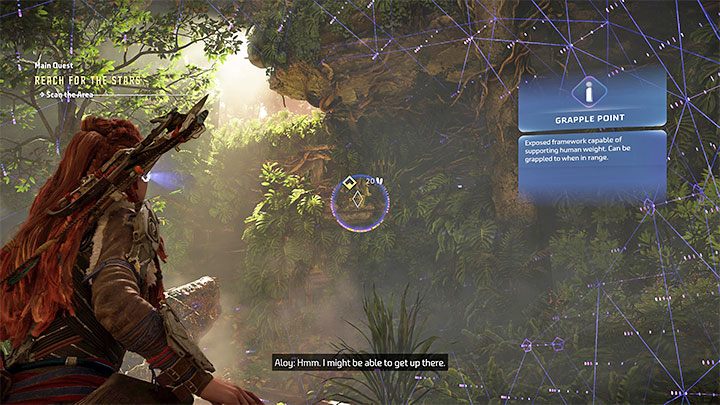 Focus is basically a scanner that you can activate by pressing and holding the right analog stick. It is available from the beginning of the game, and its use is unlimited. Focus pulse has many useful uses, the most important being:

We especially recommend that you get into the habit of regularly pressing the stick while moving around the world. That way you will find various crafting materials.

For more tips related to exploration, check out the Exploration page.

Check the strengths and weaknesses of the machines you encounter 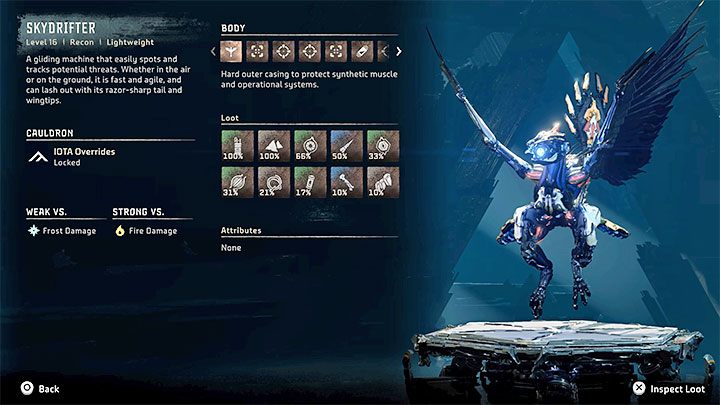 The focus mentioned in the previous subsection is also very useful for analyzing opponents for their strengths and weaknesses. This is especially true when encountering machines, as each has its own unique characteristics.

When using focus on machines, you can quickly check their experience level and weak spots, or you can read their page in the Machine Catalogue. In the latter case, you can get complete information on, e.g. the location of weak spots on the machine's body or its components, which can be detached with attacks and then picked up later. This kind of preparation is almost mandatory for strong and elite machines, but you should also memorize the battle tactics for the more common opponents.

For more tips on defeating machines and other types of enemies, see the Combat and stealth page.

Look for opportunities for stealth attacks 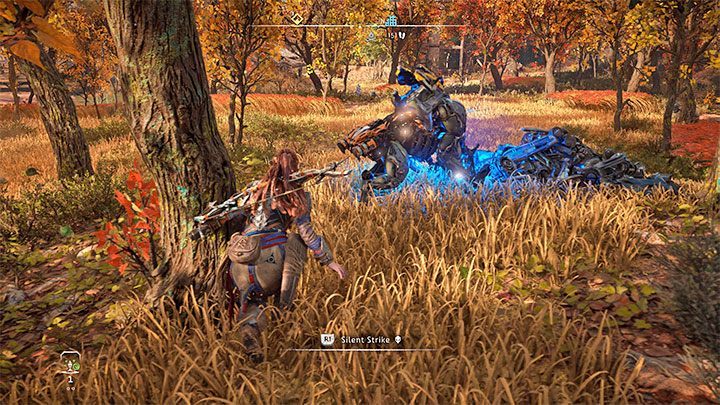 In Horizon Forbidden West, you can defeat many machines by using stealth attacks. They are able to completely eliminate or reduce the risk of direct combat, where Aloy can easily die from just one strong attack.

Approach the machines you want to eliminate stealthily from behind or from the side. You can also use tall grass and other places that can provide cover. If you do manage to get close to the machine, then use the Silent Strike, which is a powerful spear attack. You may also fire a strong bow shot, which should be aimed at one of the weak spots. You can increase the effectiveness of your stealth attacks by upgrading your weapons, unlocking skills from the Hunter's tree and wearing outfits with takedown and stealth bonuses.

Check the level of the machines you want to attack 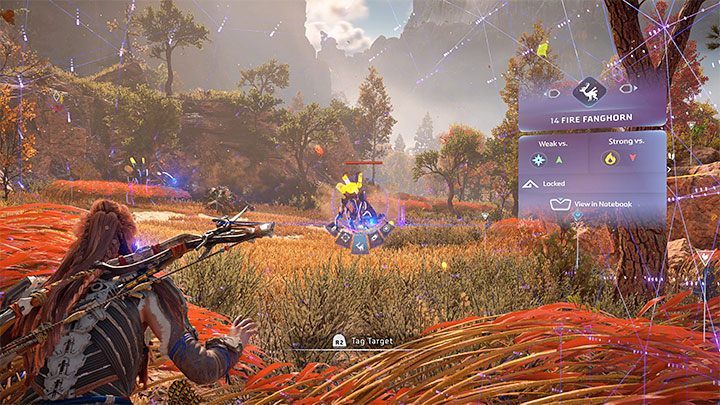 Every opponent you encounter in the game has a certain level. You can see it by using the Focus. You should avoid enemies with significantly higher levels. Such opponents can kill Aloy without any problems, while she will have a lot of trouble dealing them any damage at all.

This can be a problem after you unlock the free exploration of the entire world. You may then reach overly difficult regions or locations. Try to look for opponents with levels similar to the heroine's. The same goes for the quests - focus on those whose recommended level is close to yours, and leave the more difficult quests for later.

We've covered the topic of experience levels on, e.g. the Character progression page. 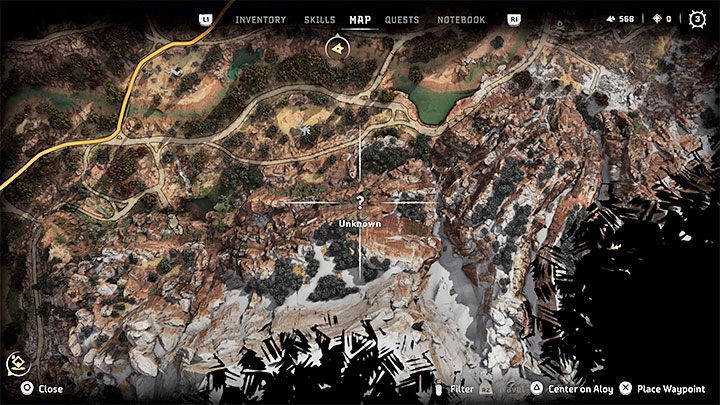 While exploring the game world, you can find a lot of locations marked with a question mark. The game hides information about the type of location until you approach it - the question mark is then replaced with the appropriate icon. These locations can have various attractions, such as environmental puzzles or additional equipment. It's worth noting that you don't have to explore the sites you discover right away. What's more, some locations can only be visited after advancing in the game and getting the right equipment. However, the game will inform you about that.

Also visit discovered but not yet explored locations - for example, campsites or villages visible on the map. There, additional icons may appear after Aloy's visit, symbolizing for example merchants or places to start side quests. All this can help you gain more experience and valuable loot.

Remember to replenish your ammo 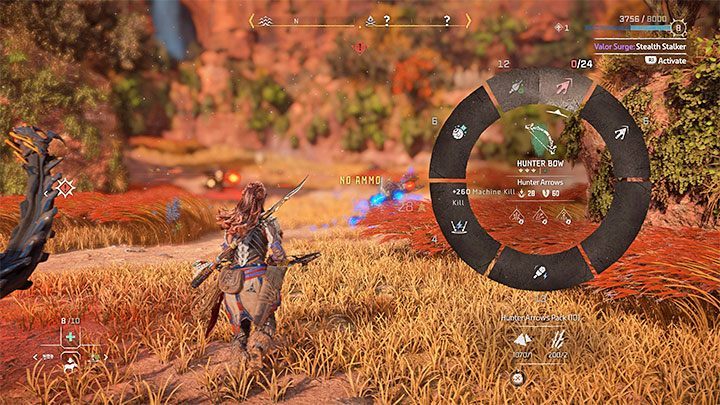 Ammo in Horizon Forbidden West is quite a developed mechanic - there are many different types of ammunition that you should try to stock up on. Each type of ranged weapon uses a different type of ammo. Even the same weapon can have more than one type, such as regular arrows and those dealing acid damage.

You can produce ammunition from the weapon radial menu - you don't have to return to the location with the workshop each time. This is very helpful if you are currently in a battle and need more ammo to continue attacking your opponent's weak spots. Of course, make sure you always have plenty of the crafting materials needed to make arrows and projectiles. The materials for all common types of ammunition can be obtained by simply exploring the game world - you don't have to buy them from merchants.

For more information on ammunition for ranged weapons, see Ammo - how to refill?. 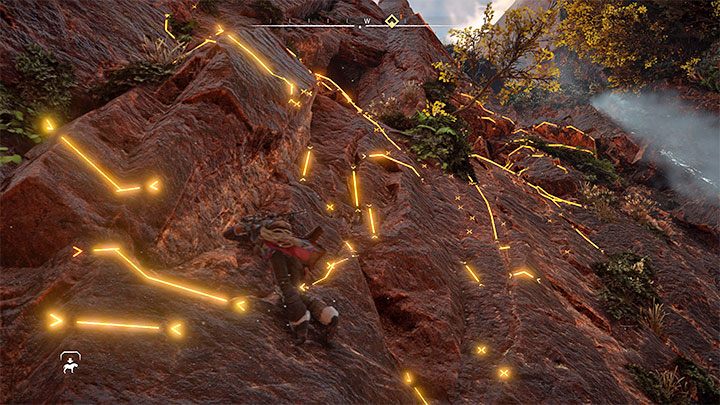 Climbing in the game can be difficult, as Aloy is unable to climb everything. This can lead to a situation where a shelf or edge that is theoretically within Aloy's reach turns out to be inaccessible.

Use the focus pulse to mark in yellow all interactive edges and places you can climb. This can be very helpful in determining your climbing route, especially if it is more extensive and involves climbing a large cliff face, for example. Also keep in mind that sometimes climbing may require you to perform more advanced moves, such as jumping far to the side, jumping backward, or grabbing onto an interactive handle with the Pullcaster.

Use traps to weaken machines 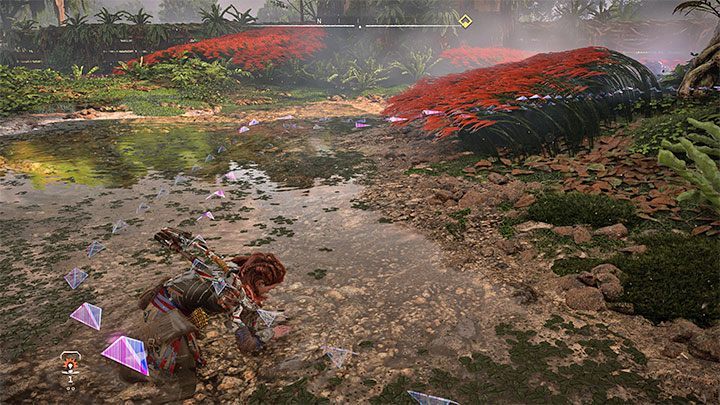 As an alternative to the previously mentioned stealth attacks, you can destroy or damage machines with traps. You'll get your first traps during the prologue, with more to unlock later in the game. You can also set them up by using weapons like the Tripcaster.

Before you set traps, it is a good idea to track the route of the machines with the Focus. This will allow you to determine which area the machine is patrolling and place the trap at the right spots. Alternatively, after deploying the trap, you can deliberately let the machine notice you and lure it to that trap. Remember to match the damage types of the traps (e.g. fire) to the weaknesses of particular types of opponents.

Use dodges in close combat 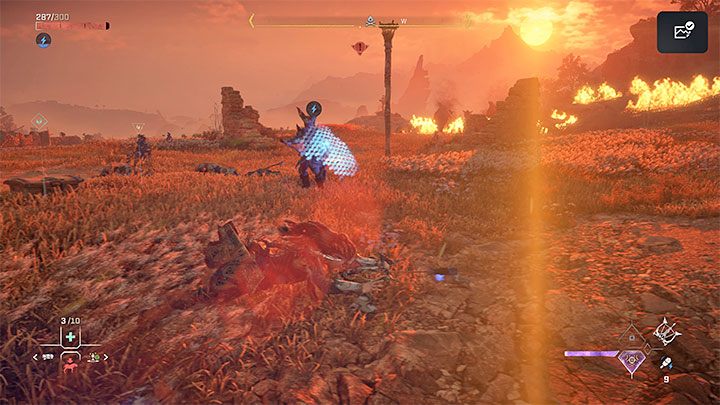 In some situations, you may be forced into direct fights with machines or living opponents - use the spear to deal them damage. If enemies attack you in melee, use dodges, especially when you see your opponent preparing a powerful attack (e.g. hitting the ground, swinging the tail or making a charge).

Dodge by pressing the Circle and tilting the left analog stick in the desired direction. You can use this action repeatedly, which is great if you are fighting a nimble opponent who often uses more damaging attacks.

Use berries and potions to heal Aloy 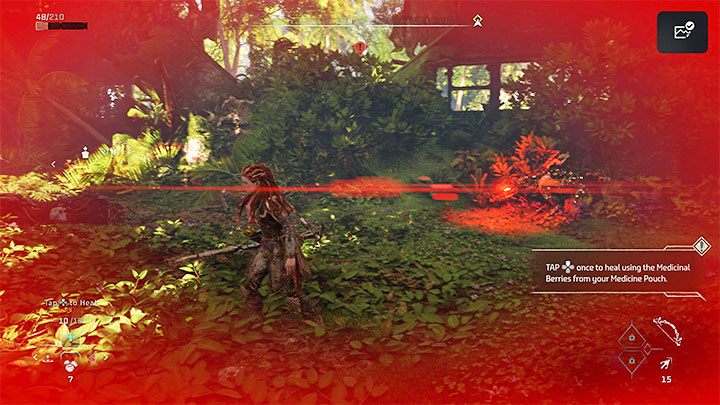 Don't forget that Aloy can easily die, especially if an opponent uses a strong attack that deals a lot of damage. Try to always keep an eye on the heroine's health bar and react immediately when it drops drastically. Medicinal Berries slowly restore Aloy's health. If you need to restore health faster, use a potion.

Try to always have plenty of healing items in stock. Berries are very common in the game world. Potions can be found in, e.g. various containers. You can also use crafting or purchase consumable items from merchants.

More on restoring health points can be found on the Healing - how to restore health? page.