On this page of the guide to Horizon 2 Forbidden West we explain how and when you can get your first weapons - the spear and various ranged weaponry. This knowledge can come in handy when fighting the machines.

Note - This overview only covers selected weapons obtainable in the early game. Later on in the campaign you'll be able to buy, get or find many different weapons, often of higher stats and better quality.

Weapons available from the beginning of the game 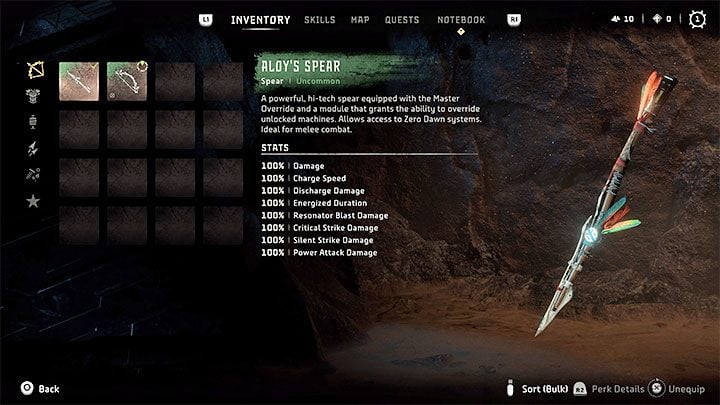 Horizon Forbidden West doesn't let you transfer weapons acquired in Horizon Zero Dawn, which means you'll have to get them and upgrade them all over again.

Starting off Forbidden West's campaign your protagonist will have access to two weapons - Aloy's Spear is your basic melee weapon. 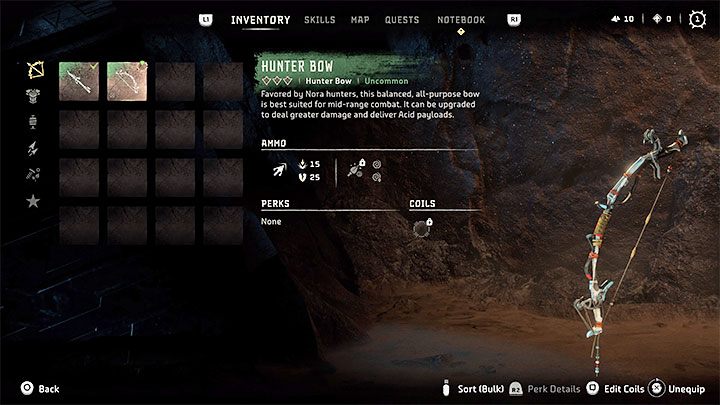 The Hunter Bow, on the other hand, is your first ranged weapon. You should know that unlike the spear, you can upgrade the bow by visiting any workbench and spending crafting materials. This will raise the bow's base stats as well as unlock new Perks and coil slots. 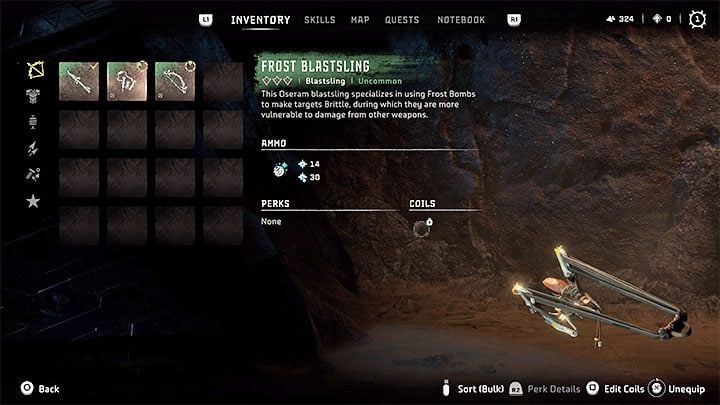 You automatically receive your first Blastsling during the Reach for the Stars main quest. The sling can shoot ice bombs, which is helpful when attacking enemies weak to ice. 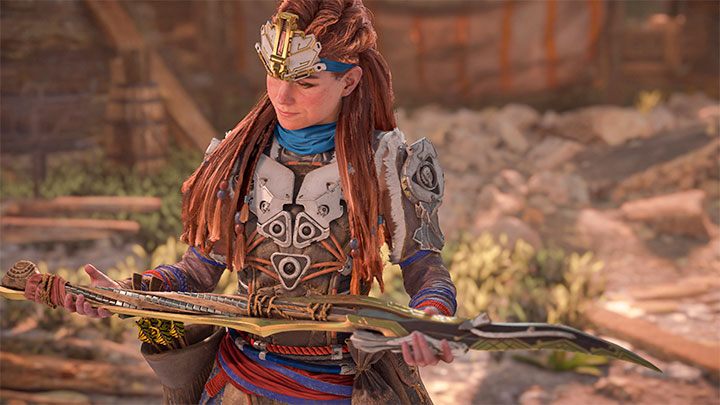 The Champion's Spear is a better spear which will replace the one you started off with. It's also unlocked automatically - Aloy receives the upgrade as a gift and uses the workbench on her own during The Point of the Lance main quest. This upgrade will allow you to unlock and use the Resonator Blast spear skill. 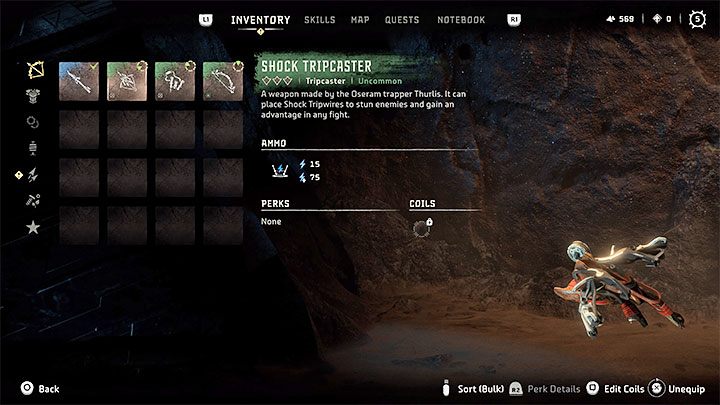 You receive the Tripcaster from Thurlis, automatically during the To the Brink main quest. As a reminder, this weapon lets you set up tripwire traps. Its default version creates shocking traps, although the weapon can be upgraded to unlock its new features. 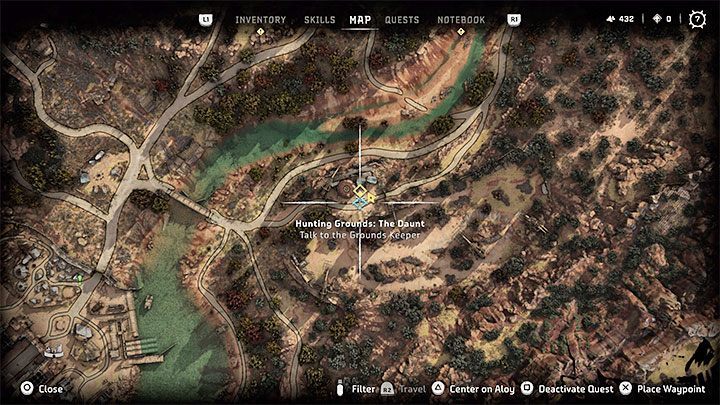 You can acquire your first Warrior Bow in a few ways, one of them being a visit to the Hunting Grounds in The Daunt region, the one where you start exploring the game world. You'll receive the bow even before starting the hunting trials - you don't need to complete them. As a reminder, Warrior Bows have a high fire rate and are well suited for short-range combat when you don't need to aim too precisely.

Weapon vendors in The Daunt region 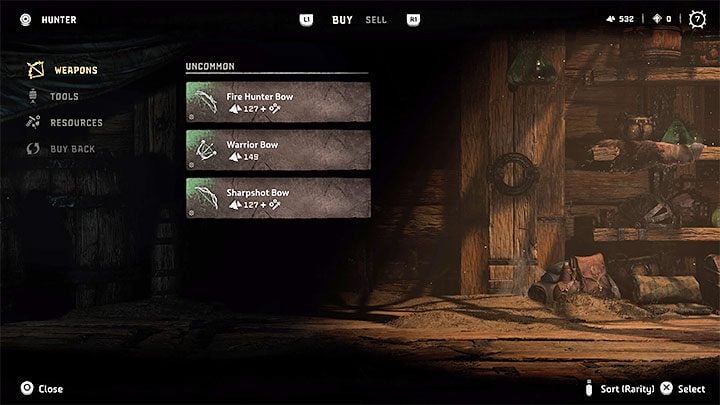 The merchants in Chainscrape are initially unavailable. Before you can access them you must progress with the To the Brink main quest.

By visiting a hunter you can purchase several ranged weapons. We recommend buying a Sharpshot Bow in particular - it fires slow but incredibly powerful, special arrows. It will come in handy early on to attack monsters that are on a higher level than you. 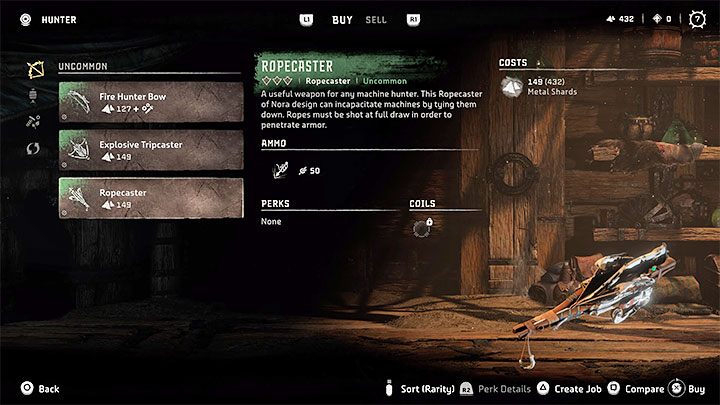 One of the hunters in the previously mentioned Hunting Grounds also serves as a trader. Among his wares you can find the Ropecaster. This is a unique category of ranged weaponry which lets you immobilize machines with ropes. 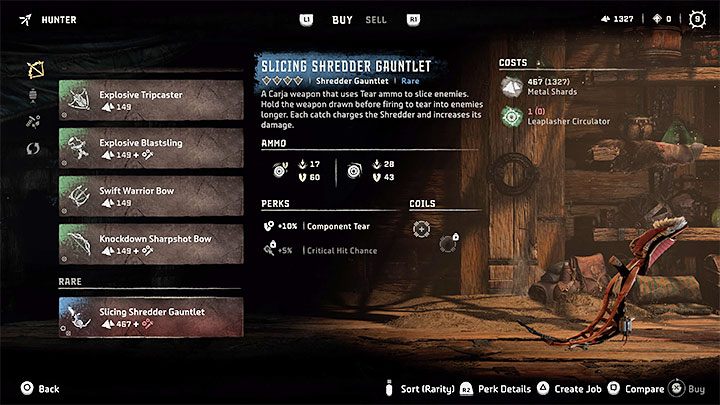 During The Embassy main quest you'll visit Barren Light for the first time. We recommend checking the hunter's wares in this area as well. One of the weapons he offers is the Gauntlet.

If you take advantage of all these opportunities you should have enough gear for the early game. Later on, after unlocking the full game world, you can start looking for better variations of your current weapons or for new, unique gear.