This guide for Homeworld: Deserts of Kharak is a detailed collection of information on the game. It includes detailed information that will be helpful at completing the single player campaign. Still, also proponents of multiplayer will be able to find useful hints here. For players that have had no previous experience with the game, information on basic structures of the game interface, has been provided, which makes for a quicker start with the game. The more inquisitive ones, on the other hand, will make use of the list of the available units and their abilities, as well as a technology tree for each of the factions. This has been enriched with information on what to invest your resources into. This has been rounded up with a list of artifacts, as well as with the list of the available achievements.

Homeworld: Deserts of Kharak is the next installment of the classical RTS that takes you to post-apocalyptic times, where the Earth became one large desert and human settlements fight each other for both survival and domination. During the main campaign, you will try to retrieve a lost artifact that is capable of saving the world from further degradation. The game is not too diversified: the number of vehicles is low, also there are not too many building to be built. Instead, the game requires you to rack your brain over commanding your armies,, which is often accompanied by scarcity of resources. The single-player campaign offers 13 missions, but the game is strongly intended for multiplayer, where up to 6 player can participate.

This guide to Homeworld: Deserts of Kharak includes: 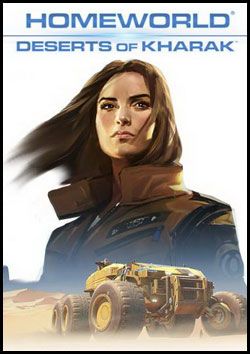 Homeworld: Deserts of Kharak is a science-fiction real-time strategy game. In terms of the plot, the game is a prequel to the previous installments, with its action beginning 106 years before the events from the original Homeworld. The game is set on the surface of the titular Kharak planet, which is home to the exiled Kushan people. The planet is dying, for most of its surface has already changed into sun-scorched deserts. The situation on the planet changes dramatically when a satellite discovers a mysterious object buried under the sands of Kharak's largest desert. Soon, the coalition of northern clans organizes an expedition, though it goes missing. The campaign tells a story of the second expedition led by officer Rachel S'jet.

Homeworld: Deserts of Kharak is a typical representative of the RTS genre. Contrary to the previous installments, the game is set on the surface of a planet, rather than in space. Despite that, the gameplay mechanics implemented resemble what both Homeworld and Homeworld 2 had to offer. For instance, instead of having a stationary base, the player uses a huge land cruiser called Kapsi - when it gets destroyed, the player loses.

The course of a battle is highly dependant on the landform here. All the maps are filled with mountains, hills and pans. Climbing higher gives a substantial advantage over the enemy, because the range of weaponry increases for example. Each unit has at least one active or passive ability and using those effectively makes it much easier to achieve victory.

Homeworld: Deserts of Kharak Game Guide is also available in our Mobile App This site is not associated with and/or endorsed by the Gearbox Software or Blackbird Interactive. All logos and images are copyrighted by their respective owners.