The guide for Homefront: The Revolution is a complete guide through ruined streets of one of the American cities - Philadelphia, which will lead you through all the attractions prepared by the game's developers. The first chapters of the guide present numerous tips, which will help you during combat with the enemy, to prepare adequate equipment, and explain the zone system of Philadelphia.

The further chapters of the guide are the core - the walkthrough. You will find a correctly prepared description of the game, with tips for undertaken combat and the rewards given for individual missions. All missions received specially prepared screenshots, which will help you to navigate. The further parts of the guide show additional activities connected to the areas of influence in Philadelphia. Here, you will find detailed descriptions of red, yellow and green zones which are under Korean control. The tips presented here will also help you in effective navigating of the areas controlled by the enemy, capturing outposts and saving citizens.

The final chapters of the walkthrough contain technical aspects along with the description of every available graphical option. This chapter is mainly directed towards PC owners, who want to maximize the performance of their hardware without losing the quality of the displayed picture. The culmination of the guide is the chapter describing the system requirements for PC platform.

Homefront: The Revolution is an open world FPS, based around an armed conflict between the United States and North Korea, developed using CryEngine graphical engine. In the game, we assume the role of a man named Brady, who is with the resistance. He sets out to thwart the invader's plans. The entire game takes place in occupied Philadelphia, where you will find dangerous Korean influence zones.

The guide for Homefront: The Revolution contains: 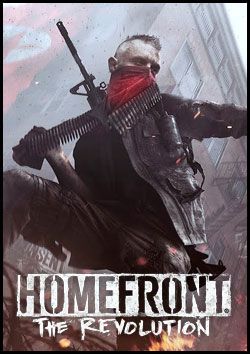 Homefront: The Revolution tries a new approach to an FPS franchise which debuted in 2011 and gained significant popularity among the players, despite receiving rather mediocre reviews. The story focuses around an imaginary conflict between North Korea and the United States. It's been four years since the USA has fallen to the invaders and the constantly growing forces of the resistance are preparing a huge revolution against the oppressor. You are thrown into the devastated streets of Philadelphia, where you join the local resistance and sabotage every major enemy objective in any way you can.

Unlike the previous game, which was linear in its structure, Homefront: The Revolution is set in an open-world environment. The order of missions and the way they are completed are mostly up to the player. As a member of the resistance you can recruit new people to aid your cause. Apart from dynamic combat, in which you use various weapons and vehicles, it is often necessary to go in guerilla style and keep a low profile while operating behind the enemy lines.

Your hideout doubles as your headquarters; that's where you improve your gear and weapons in between missions.

Homefront: The Revolution is powered by the CryEngine 4. This resulted in very detailed environments, superior sound and high quality visuals.

Homefront: The Revolution Game Guide & Walkthrough is also available in our Mobile App This site is not associated with and/or endorsed by the Deep Silver / Koch Media or Deep Silver Dambuster Studios. All logos and images are copyrighted by their respective owners.