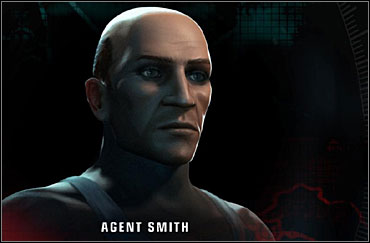 First you have to get patient's robes. In order to do that, you can sedate a sole patient who's standing near the recycle bins, then drop his body into one of them. It's not easy, as the area is being watched by the guards. Do it when none of them is watching.

HINT: There's another, easier way to get the robes. Just grab the admission papers from the guy waiting near the bench (screenshot below). Give the papers to the lady at the desk to get your robes the official way.

Enter the main building. Leave your weapons in a safe room of your choice, then let the guard scan you. Enter the clinic, turn right and go up the stairs. In a room with an open door you'll find a doctor's outfit - wear it.

Go back to the ground floor and go to the West, to the Medical Wing. Enter the security room and take the keycard (the guard won't mind) from the desk, and then use it on the gate.

You'll get to a room where you'll see two orderlies through the window. Wait for one of them to leave and then jump through the window and sedate the second one. Take his uniform and drop the body in the container nearby. Take two keycards from the desks.

Go down the stairs and enter the agent's room (see map above). After talking to him, use Death Serum on him. Watch out so nobody sees you through the window, as it will look like murder. You'll get a call from the agency saying that there are two more optional targets around the clinic - each one will give you 50 grand extra. To finish the game you just have to kill one of the three, but we'll take care of them all.

Go up the stairs and wear the doctor's suit once more. Your first target is the patient who's working out at the Eastern end of the clinic. Approach him when he's exercising and choke him with his weight. Two more to go.

You now have to set two traps. The first one is the stove that can be seen on the screenshot above. Go to the first floor and enter room A. Use the balcony to reach the cook's room. Mess up with the stove and leave. The second thing to do is to inject some poison into a bottle hidden in the globe at the ground floor (see the screenshot above). Leave the clinic and head to the morgue, where Smith should be laying by now. Use the antidote on him and wait for the two accidents you set up to happen. Take your suit from where you left it and leave the area. 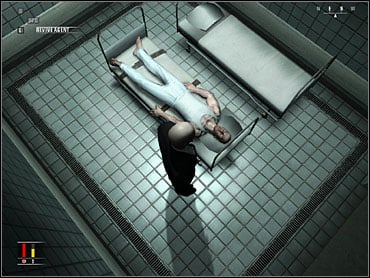