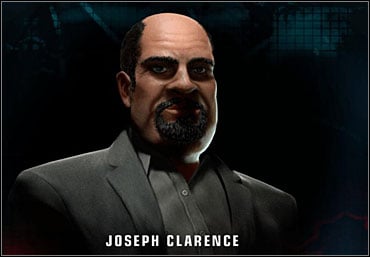 The first stage of the game is a tutorial in which you'll be guided through the game's controls and features. Your goal is to assassinate a man called The Swing King, proprietor of a closed funfair, whose ignorance let to a tragic accident a few years ago. You also have to ensure that the last thing your victim will see will be the picture of a boy who died in the tragedy.

Go up and approach the gate. Go through the cut-scene in which 47 will take care of the guard. Go to the left, through the door. Throw a coin at a target to the right to distract the guards and sneak to the theater on the other side. Enter it and sneak-kill a man torturing the prisoner. Go up the red trellis to the right and jump across to the balcony.

There's a shotgun near the box, grab it if you like. Kill the two guards and hide their bodies in the containers here. Enter the closet - when a chemist enter, sneak-kill with your fiber wire. Take his key card and wear his clothes.

Use the card to open the door to the atrium. Enter the first door on the left and put a pistol in the box, then pick the box up. Approach the guard who'll scan you for weapons and then enter the room he's guarding. Close the door and take the gun from the box. Jump down to the elevator and use the fiber wire to choke a guard underneath. Go down. Disable the power box to the right.

Sneak through the big room - first go forwards, then right. Enter the toilet. Sneak to the gangster in there and grab him to use as a shield. Drag him to the next room and shoot all the people in there. Go up the ladder and pick up the suitcase with a rifle. Take Dragunov out of it and stand by the window. You have to take out three guards: one is on the roof, second is near the big wheel, and the third is patrolling the alley below. When you're done with them, leave the room and go down using the pipe.

Go to the office through the door on the left. Take the syringe and go up the stairs. When the guard is done walking, push him out of the window. Enter the office and use the syringe on her drink. Enter the closet and wait until she's off.

Enter the Swing King's room to see a cut-scene. Kill him and leave through the window. Take a mine and a detonator from the box, and then go along the balcony to the next room. Place the mine on the device in front of you. Detonate it and finish off any survivors using your gun. Use the door to exit. 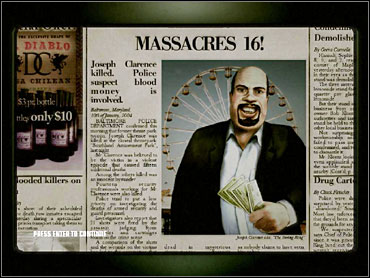