On this page of the Hitman 3 game guide, you will find a list of all the best disguises you can get while exploring the Burj Al-Ghazali skyscraper in the On Top of the World mission, Dubai. The disguises we suggest will allow you to freely explore the map, effectively approach your target without arousing suspicion and make it easier to eliminate them.

Security guards of the Burj Al-Ghazali skyscraper wear distinctive white uniforms. By disguising yourself as one of them, you'll be free to explore a significant area of the Dubai map and go into locked rooms that only staff has access to. 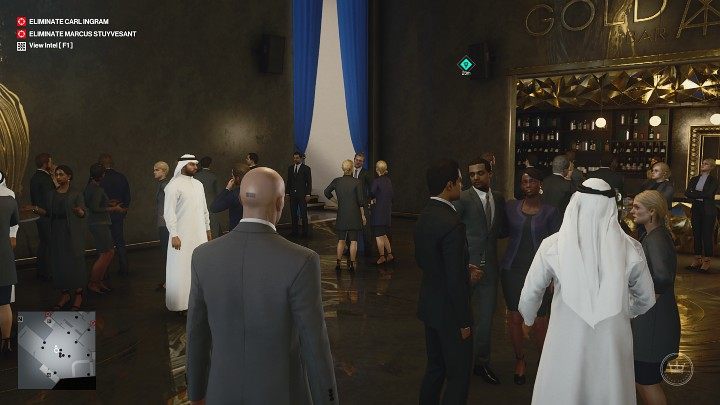 This disguise can be obtained in several ways, and probably the best opportunity will come near the security office. Head to the floor where the opening reception is, and next go to the bar area on the left. From there, take the stairs to the upper floor. 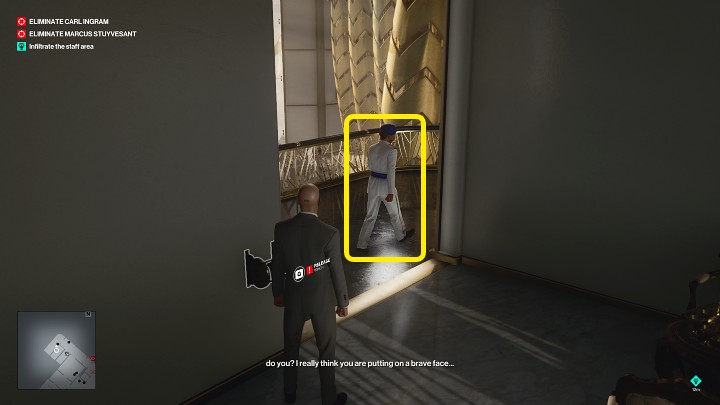 Turn left, bypass one guard and lurk in an alcove for a second enemy. When he passes by, grab him and overpower him. Take his belongings and hide his body in the closet.

The Penthouse Guard outfit will allow you to move all over the Burj Al-Ghazali map with a gun, and most importantly, it will open access to the top floor of the building. The opportunity to get this disguise appears, for example, when you enter the third floor of a building. 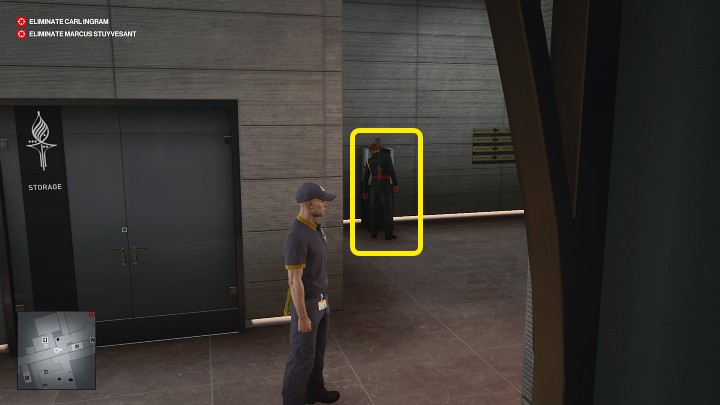 One of the guards patrols the hallway by the server room - when you turn off the cameras, he will become an easy target. Attack him the moment he disappears from the sight of the second guard standing by the passage to the reception area. 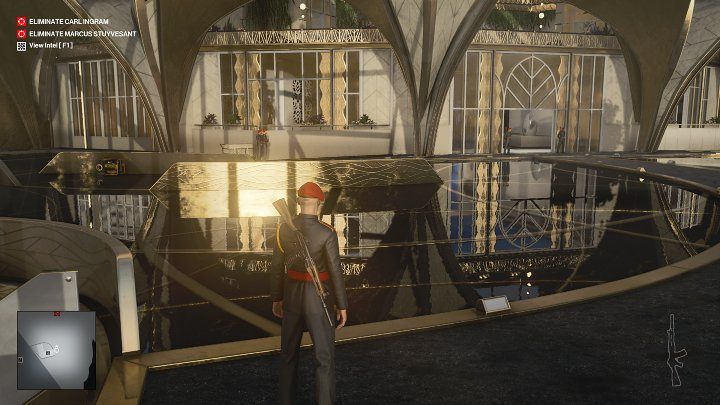 Now you can safely move around the entire map area and the top floor of the building. Beware, however, of the more vigilant guards who may recognize you if you are careless.

Zana "The Vulture" Kazem is one of the top agents working for Crystal Dawn, a Pan-African terrorist organization. By pretending to be this man, you will be able to meet Carl Ingram. 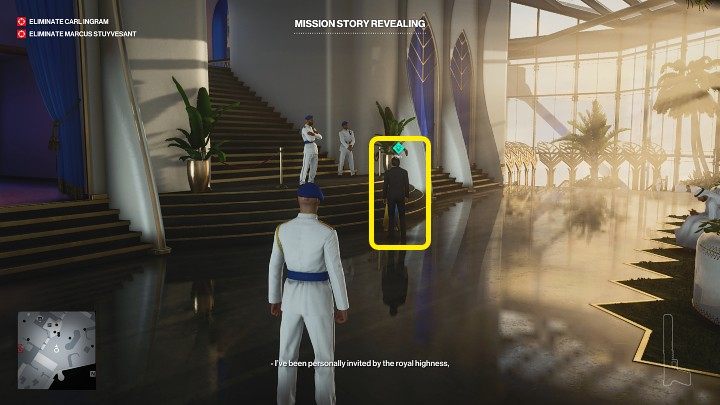 The opportunity to get this disguise appears during the Bird Of Prey story mission. As soon as the man walks into the garden to smoke, follow him and hide in a nearby lodge. 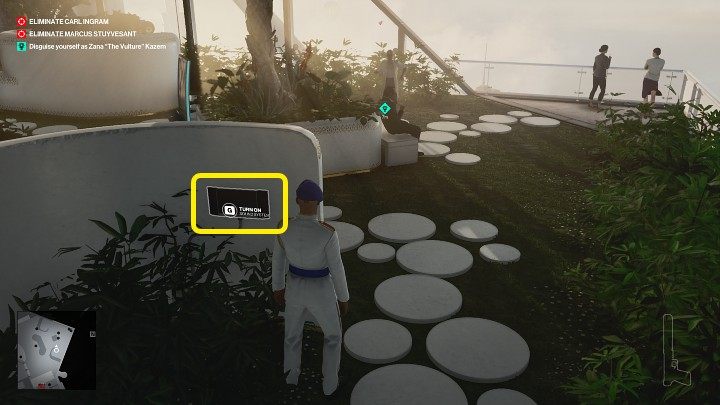 Use the terminal to get Zan's attention and hide in the bushes. When the man approaches to check the device, sneak up to him from behind and overpower him. Drag the body into the bushes and change into his clothes. 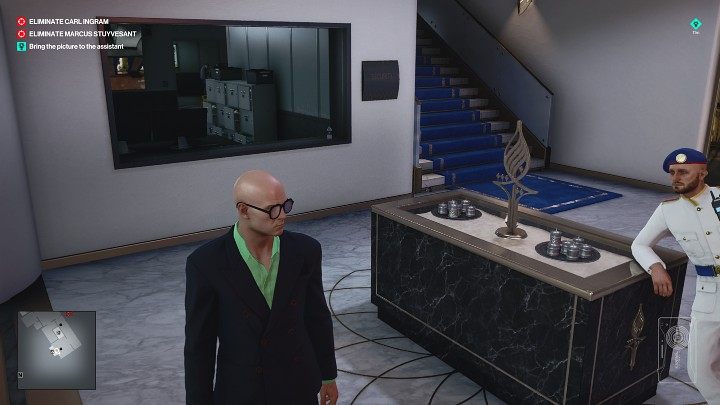 It will allow you to go to the guarded floor of the skyscraper and to explore a large part of the map freely.

The floor service worker costume will allow you to move around the upper floors of the building. You can get it, for example, on the third floor where the server room is located. 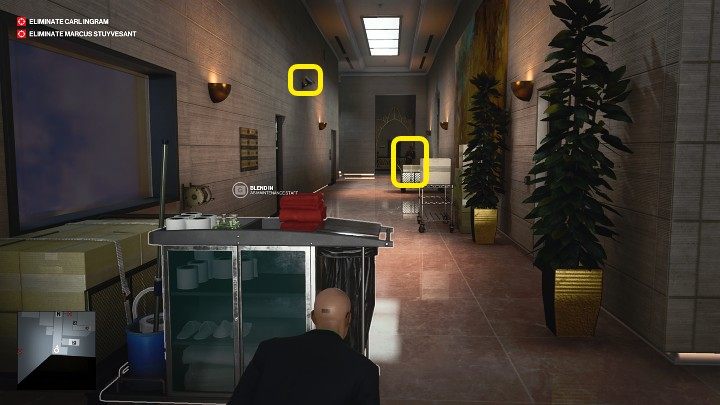 The corridor is guarded by one guard and a camera on the wall to the left. Wait until the guard goes on patrol and the camera is facing the other way and sneak into the utility room - second door on the left. 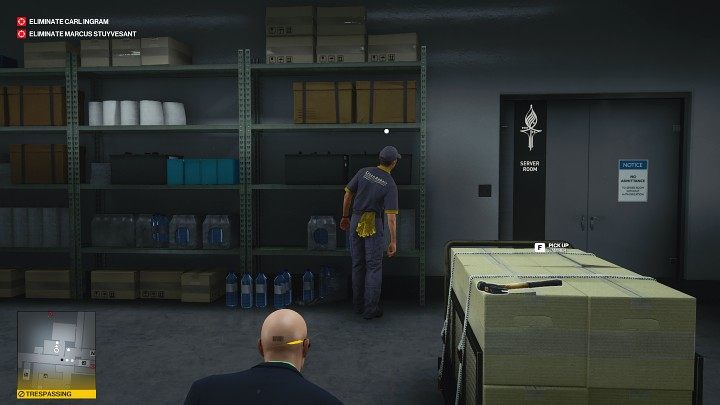 Inside you will find a floor service worker. Go around him from behind, knock him down and then take his clothes to gain reliable camouflage. Before you leave this room, hide the man's body in the closet.