On this page of the Hitman 3 guide, you will find a map of Chongqing and the most important information about the mission End Of An Era which takes place there. You will learn about the main areas on the map of Chongqing, what the objectives and unique features of this mission are, and what the rewards for reaching the next levels of Chongqing mastery will be.

Information about the End Of An Era mission 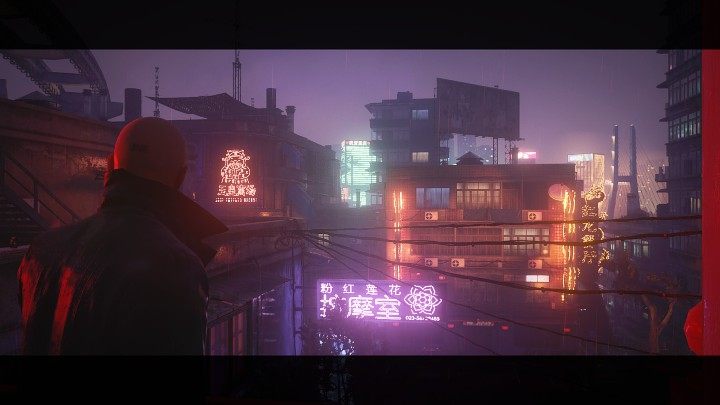 This mission is set in the city of Chongqing located in China. Agent 47 visits this location at night. However, the streets of the metropolis are lit up by numerous neon lights attached to the surrounding buildings. There are numerous bars and public buildings in the examined district of Chongqing city. The place is bustling with life even after nightfall; 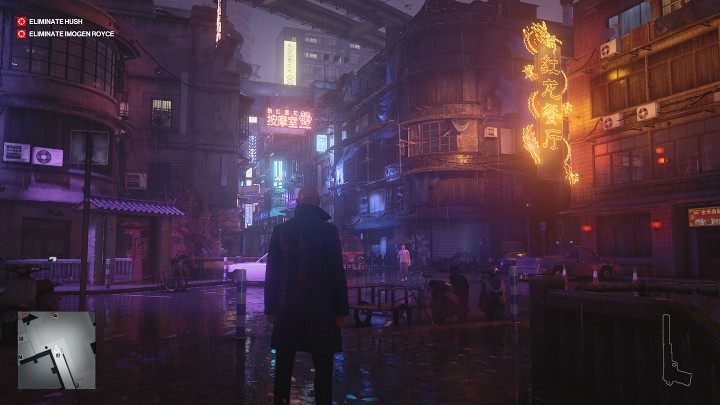 Through the streets of Chongqing and around some buildings, Agent 47 can move freely, but to get into the official rooms and guarded areas of the map (ICA facility, homeless shelter), you'll have to work a bit harder.

There are 3 shortcuts and one secret passage in the Chongqing (China) level, which will greatly speed up your movement around the map, making it easier to complete each challenge. Each of the shortcuts described below can be unlocked permanently, i.e. you can make them available during all subsequent mission reruns. 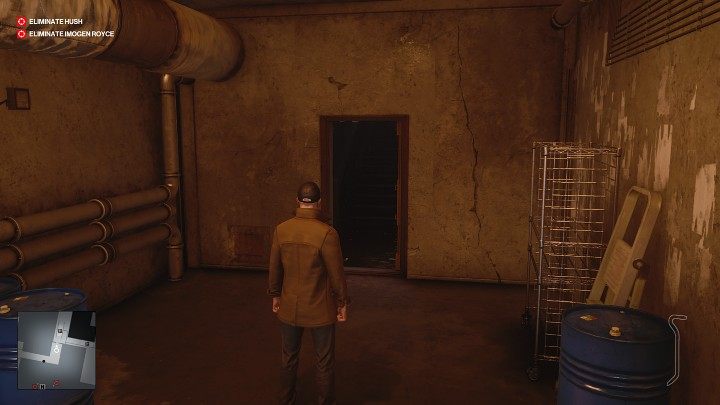 You can activate the shortcut right after starting the mission in Chongqing (Point 39 on the map). The door can only be unlocked from the other side, and you'll get there through the alley by the boardwalk - there are 2 guards standing in front of the entrance so it's worth getting a Street Guard disguise. A shortcut that takes you across the boardwalk (River-Side Walkway) to the side entrance door of the ICA facility, which will take you to Level 0. 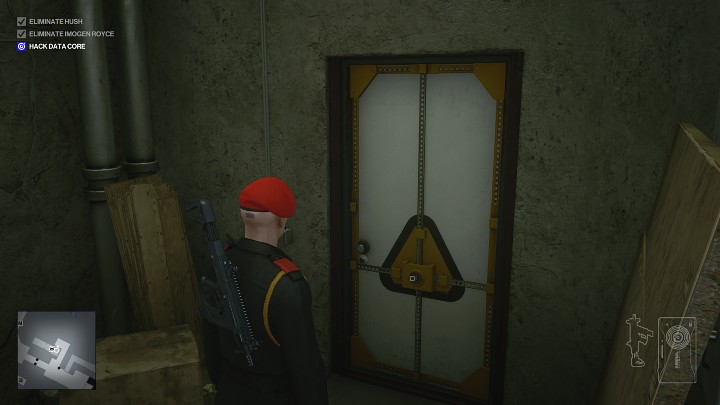 The shortcut can only be unlocked from the inside, and you'll get there through an elevator shaft in the ICA security room (point 18 on the map). Open the elevator shaft, climb up the gutter to the upper floor, then move to the left, hack the shaft grate lock and open the barricaded door. This shortcut leads to an alley near the hidden entrance to the ICA facility (point 26 on the map). 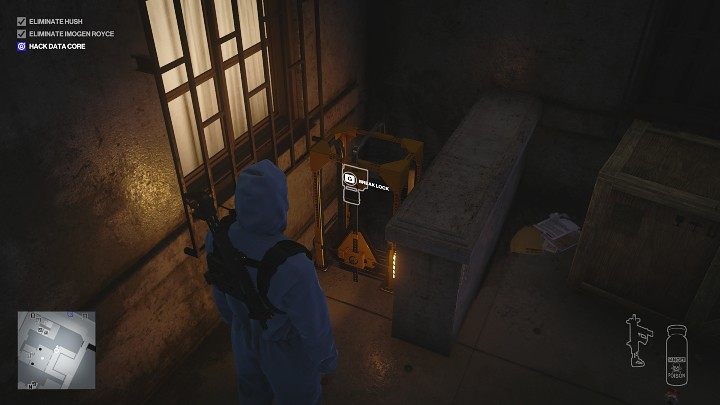 Shortcut 3: The Ladder in the Homeless Shelter Building (The Block Ladder).

You'll find the shortcut on the balcony after you leave the recruitment room (point 49 on the map). Before you try to unlock this passage, it's a good idea to disguise yourself as a street guard, a security guard at this facility, or a homeless person. You will need a crowbar to lower the ladder (point 32 or 62 on the map). This shortcut leads to an alley between the Arcade and the hostel, right next to the secret passage (point 28 on the map). 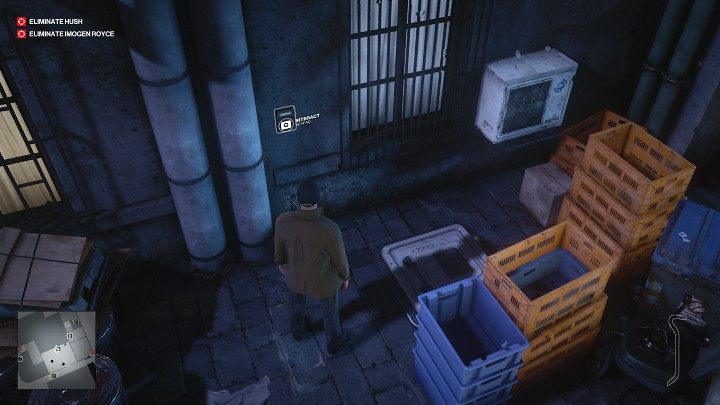 You'll find a secret passage in the alley between the Arcade and the homeless shelter building (point 28 on the map). You can get to the secret hatch just moments after the game starts, simply take the crowbar (point 32 on the map) and pass through the Arcade game room to the alley. It's a good idea to pick up a Street Guard disguise from the video arcade on the way so as not to attract the attention of the two guards standing outside. You will unlock the secret passage with code 2552. A shortcut leads to level -3 of the ICA facility.

Below, you will find a list of the most important locations, marked with points on our Chongqing map. References to these and other areas can be found on the following walkthrough pages of the mission in China.

1 - Data Core. Here, you will find a computer which you must interact with to complete the optional Hack Data Core story quest.

2 - The way to the ventilation shaft. An alternative entrance to and main exit from the Data Core room. By scanning the lock or prying the grate with a tool, you can get to a narrow catwalk leading to a ventilation shaft.

6 - Ventilation Shaft. The shaft connects all the main rooms in the ICA facility, so you can move around the facility without being noticed.

10 - Imogen Royce's Office. This is the office of one of the two main targets in the Chongqing mission. Here you will find an entrance to the ventilation shaft and a computer - if you use it, you can fire three workers, which may make it easier to get to the Data Core. Office windows and doors can be tinted using a terminal.

14 - Sabotaging the surveillance system. There is a device here that records footage from the surveillance cameras. Once you destroy it, all cameras at the ICA facility will stop working. The device is protected by one guard, but you can lure him out to a nearby restroom and subdue him.

25 - Entrance to the ICA facility. There are two guards standing at the front, and another one by the container. If you want to get to the entrance unnoticed, jump down from the nearby boardwalk. Door Access Code: 0118.

30 - Main entrance to the homeless shelter. A building associated with the Impulse Control Mission Story.

32 - The Homeless. Here you will eavesdrop on the conversation of homeless people and get the first important information about the Impulse Control Mission Story.

41 - The Restaurant. This is where you will meet Mr. Pritchard whom you need to pose as during the Certainty Principle Mission Story.

44 - The Room of Mr. Pritchard. In the room, you will find Form P41 related to the Certainty Principle Mission Story. You will get to the room through the stairwell (code 0118) or through an open window (you need to climb down the gutter from the roof of the building).

46 - Recruitment Room. A room associated with the Impulse Control Mission Story. You can go to the balcony and then to the upper floor of the building through the open window.

57 - The Bathroom. In a small bathroom, you will meet the main subject of Hush's experiment. This is the person you must pose as during the final stage of the Impulse Control Mission Story.

58 - The Lotus Passage. A walkway between the Hush and Imogen Royce buildings. You can lure them in here while completing the All-Seeing Eyes Mission Story.

56 - The Crashed Drone. On the roof of the building you will find a destroyed Drone which belongs to Imogen Royce. After scanning the device, you will receive the first pieces of information about the All-Seeing Eyes Mission Story.

The mission End Of An Era in Chongqing (China) is very complex, so we describe all of its elements in detail on separate pages of our guide.

Chongqing is an expansive, multi-level map and allows for up to mastery level of 20 of this location. You gain XP needed to advance to the next mastery levels by doing the challenges associated with the Chongqing map. We've compiled the full list of rewards for advancing to the next championship levels in Hitman 3 on the map in China below.