On this page of the guide, you will find information about the available versions of Hitman 3. You will also find out whether Hitman 3 has a season pass, can you play the stages from the previous two parts (Legacy Missions), and whether there are bonuses for people who pre-ordered the game.

Hitman 3 will be released on January 20, 2021, on PC (exclusive to the Epic Games Store as part of the annual exclusivity), PS4, PS5, Xbox One, Xbox Series S, and Xbox Series X.

All editions of the game have the same release date. Those who got the Deluxe Edition won't be able to play the game earlier.

This version contains only the basic game. It is sold in digital and boxed versions (except for the PC edition). 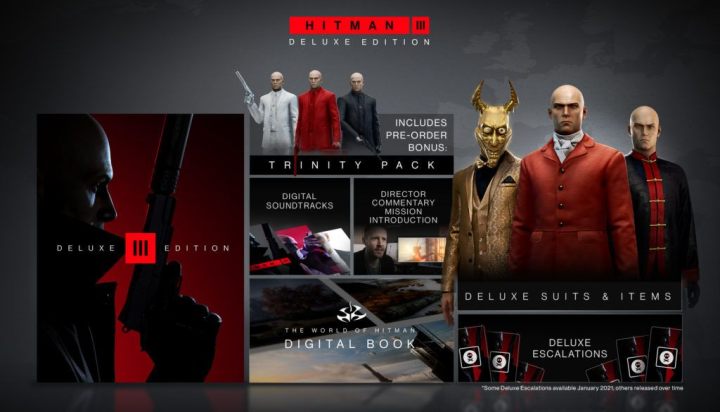 This version is sold in digital and boxed versions (except for the PC version). It includes a copy of the game and the bonuses from the Deluxe Edition:

IO Interactive isn't planning a season pass for Hitman 3. However, it is probable that there will be paid additional content released at a later date.

Hitman 3 has a bonus for those who pre-ordered the game. It is called Trinity Pack, which contains classic suits, briefcases, and weapons that you can use in missions.

IO Interactive has prepared several unique rewards for people who decide to play all three parts of the Hitman series on Google Stadia the streaming platform:

Hitman 3 will offer the ability to import stages from Hitman (from 2016) and Hitman 2. This will allow you to play all the stages of the World of Assassination trilogy in a single game.