The Dwarves move to the place where Percival Kent, a powerful Human hero, is buried. 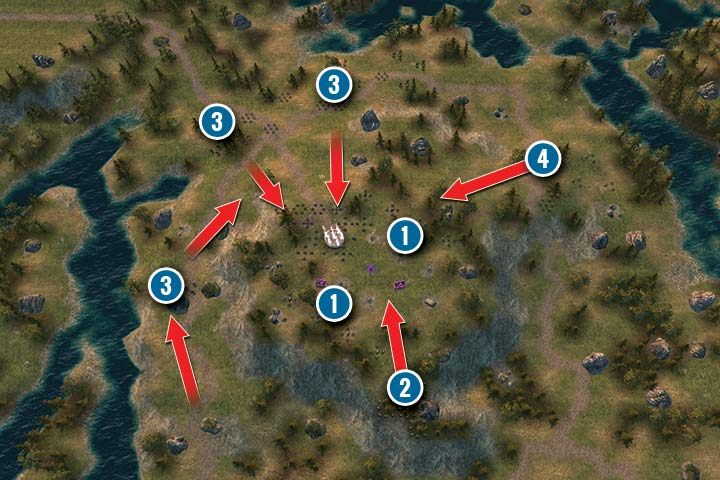 You can't command Karric in this mission. You need to defend yourself from Goblins and Orcs. Another objective is to keep Karric alive. Your army is on a small hill with Percival's tomb. The enemy will come from four directions. A few Greenskin Mages is ready to attack your hero.

The first few turns are very important. You need to defeat all the Mages (1) before they start attacking Karric. First, focus on attacking the units that are farther away from you. Thurvid and Axe throwers can eliminate a few units located farther away. Dwarven Hammers and Vahan are able to eliminate 2-3 Mages. Try to eliminate the remaining Mages in the next turn. Now, it is time to focus on the Goblins in the southern part of the hill (2).

In the meantime, order some of your northern troops to weaken the enemy assault (3). Focus on weakening Archers and Mages. Goblins won't be difficult to defeat. The ranged units are the biggest threat here. Lastly, defeat the eastern army (4). Until then, you should deal with the rest of the troops. Wait for the Mages to get near the forest tiles, and start attacking. Don't enter their reach by going into the forest or by charging towards them. It is possible that after the difficult battle, your army will be too weak to defeat them.