Despite your victory, Lixius is back with an unexpected ally. 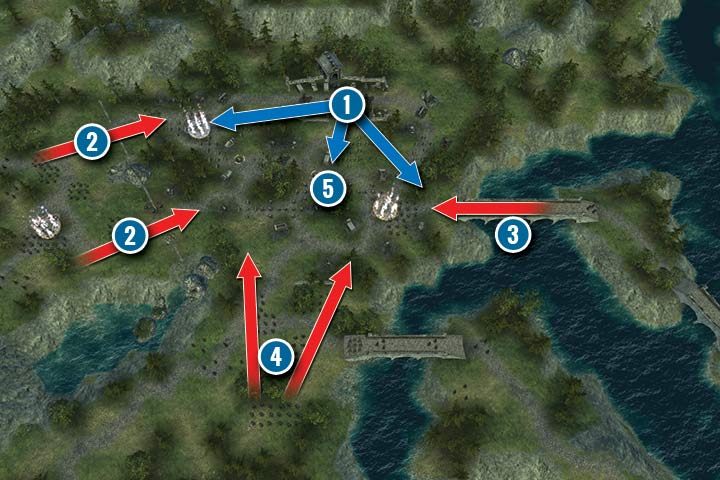 Defend the recently captured cemetery. The enemy army is led by a new champion who was your ally not long ago - Alvius. He is a powerful enemy who uses ranged attacks that can penetrate every armor. Also, every unit that attacks him has lowered defense.

Your army starts in the northern part of the cemetery (1). Your heroes are here, too. First, deal with the armies that are moving towards you from three directions - west, east, and south.

The western group consists of melee units and Mages. You can stop them in a similar way as you did in the previous mission. Use Karric or Thurvid to block the narrow passages (2). If you can't, simply send a melee unit. Their suicidal attack will slow the enemy down and make them an easy target for siege equipment.

The eastern army has only a few units. They must cross a stone bridge which means that eliminating them will be more difficult to do (3). Wait for the enemies to cross the bridge and then move your units through the forest. Use the Mortar to shoot the enemies from behind the trees.

The southern, and largest, group is commanded by Alvius (4). Try to eliminate as many Mages as possible. Move the Mortars hidden behind the trees (5). Hide your troops to lure Alvius. The majority of your units will attack the Skeletons. The Mortars and selected ranged units will focus their fire on Alvius. After that, the only thing left to do is to eliminate the remaining enemies.