Alvius helps transport the stones to Avodany. However, more threats await on the heroes' path. 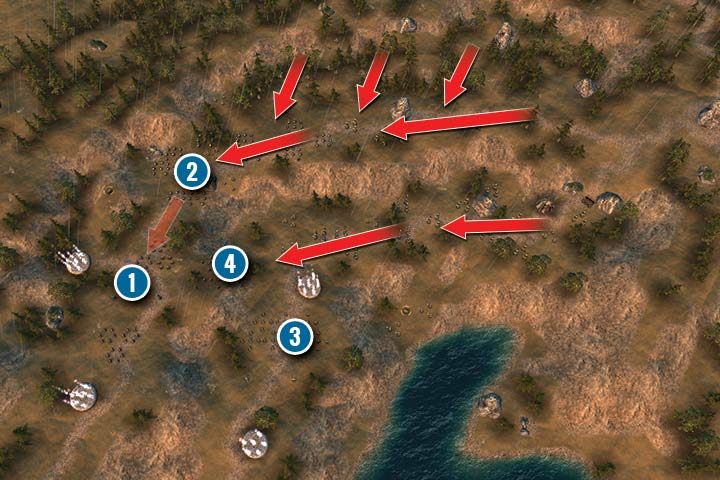 Time for another battle with the Greenskins! This time, your army is divided into two groups - one is in the upper part of the map and another is in the bottom. The enemy has a large army, but the biggest challenge comes from commanding your two separate armies.

The difficulty here comes from the fact that the upper group consists only of ranged units, Karric, and Alvius. The bottom group has Dwarven Hammers and the remaining heroes. The enemy moves towards you so make use of your armies' advantages.

The upper group is easier to defend (1). Both heroes can stop enemies for a few turns. Attack the enemies in the right place, e.g. on the road, in front of the forest, or between the narrow passages (2). Remember that it is better to keep an immobilized unit (stopped with Karric's attack) alive rather than eliminate it. This unit will block other enemies. There are two attack boost scrolls nearby.

Use Vahan (3) in the bottom army to attract enemy attention. Thurvid should use his ranged attacks to eliminate Mages within his reach - Mages can cause you a lot of problems. If you need, call Alvius to strengthen units in the front. The enemy always tries to attack the closest and the weakest units. Thanks to this tactic, you will freeze all attackers. Riflemen will also help a lot here - they are able to deal even with heavily-armored enemies (4). A chest with a shield scroll is near the portal.

Counterattack after you defeat the majority of the units in the upper part of the map. Otherwise, the Battle Mages will gain an advantage over your units. One unit of Axe throwers and one squad of Riflemen should be enough to weaken the enemies, rendering them harmless.