Returning home didn't turn out to be too happy for the Dwarves - they have become a target once again. 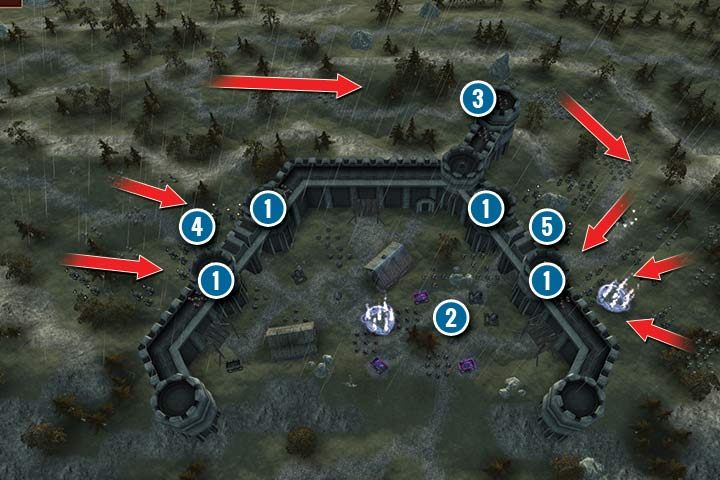 The Dwarven fortress is under the attack of both Orcs and Goblins. This time, they have more powerful and diverse units, commanded by Rorg, a shaman.

Your defense is weaker than before. Instead of Cannons, you have Riflemen (1). However, you get a few Mortars (2). Your ranged units should focus on Battle Mages, and then on Archers. Mages with full health can deal massive damage and cause a lot of problems to your defenders. As for the northern tower (3), remember to attack those units that are the biggest threat to your Riflemen. Move Karric to that place after a few turns.

Do the same with the eastern (4) and the western (5) gate - focus on attacking ranged units. Then, target the Pikemen. The enemy units will suffer heavy losses after your Riflemen's attacks. Usually, after the fire, the Pikemen will be left with a small number of health points and 1 soldier. It is better to leave a unit like this for later and finish it off with infantry. Your Riflemen should focus on firing at units with a full squad. 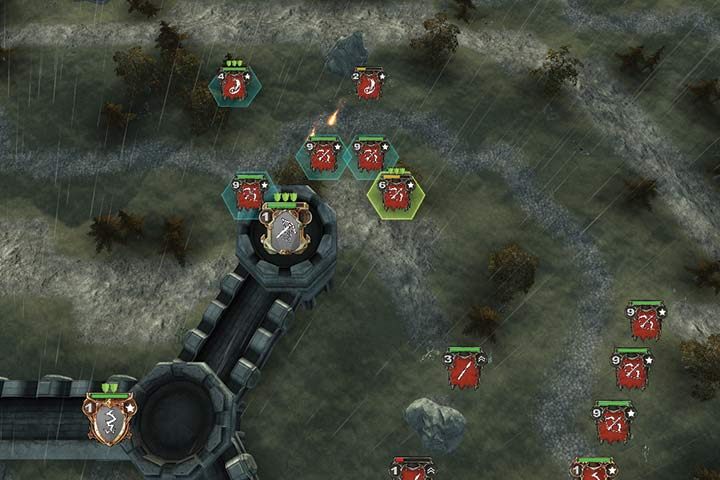 Alvius can help you achieve victory in this battle. His special ability not only protects allied units but also freezes all enemies.

Human Mages will appear after a few turns. Besides the two units, your army will also receive the support of a hero with unusual abilities. Human Mages' attack works in the same way as your Mortars - they don't have to see their target to be able to attack it. Send one of each to both sides of the fortress. Most importantly, Human Mages can freeze enemies - these units won't be able to move nor attack for 1 turn. Alvius, the new hero, can cast a shield on allied units. Also, as long as that shield is active, every enemy that attacks this unit will freeze. Use this ability on the units on the eastern frontline. After that, cast this shield on Karric who fights in the northern tower. The only thing left is to keep eliminating the enemies.