The Dwarves are still chasing Ayiren - her armies won't give up. 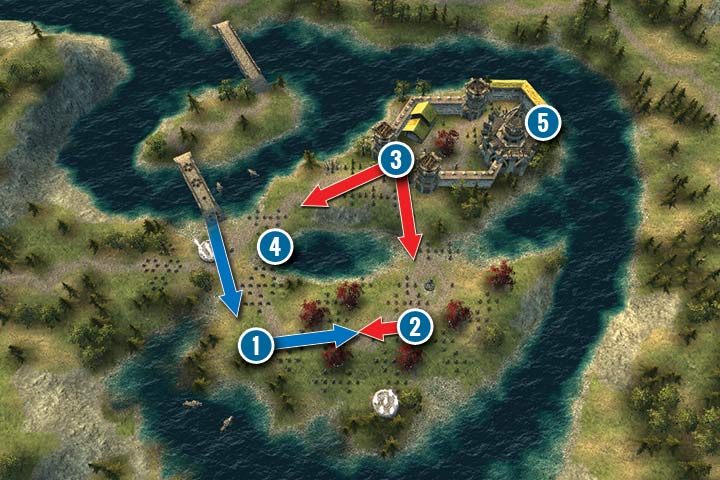 Time to capture Ayiren and ask her about the mysterious stones. Your army starts in the western part of the island (1). The enemy army is divided into two groups - the one in the south (2) will move towards you immediately; the northern army (3) will defend a small fortress.

Focus on fighting with the southern group. The army stationing on the bridge, Boars, and the rest of the infantry must follow the heroes south. Leave only a small group of units behind - they will stop enemy counterattacks. The only possible battle can happen between your units and Ballistae.

Keep the Boars in the south right next to the shore - this will allow them to join a battle quickly (4). Again, the Mages are the biggest threat here. Order your heroes to either stop the Shadow Warriors or to defeat unprotected enemy ranged units. The majority of the Elven army will move towards yours, but a small garrison will stay to defend Ayiren (5).

Try to place your heroes in both towers as fast as you can. This will allow you to eliminate the enemy Archers quickly. To defeat the defenders in this part of the map, you will need as many units as possible. Ayiren can heal allied units, but she usually chooses herself as a target for healing. Use her weakness and order Karric to attack the enemy hero. The acid will keep decreasing her health points. In the meantime, defeat the other defenders.