Dealing with the Wyverns is only half the battle. Time to deal with their masters and destroy the Greenskins' village. 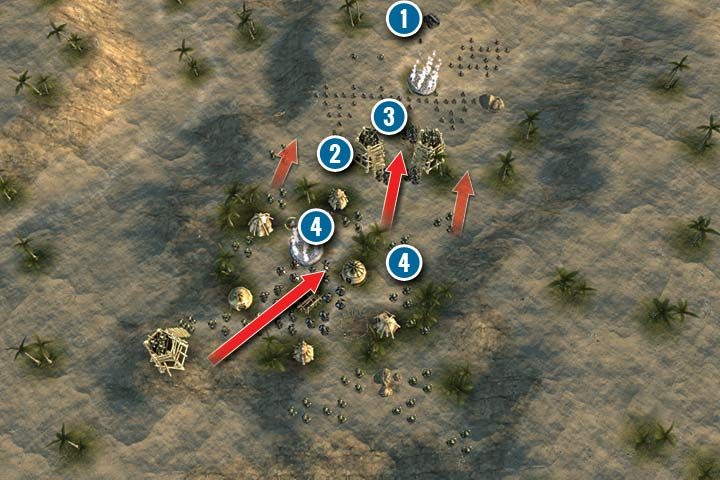 This is an intense mission which takes place on a small map. You are facing Orcs, mainly their Warlords and Archers. These units can withstand a lot and can deal good damage. However, you get access to Dwarves' Cannons (1). You can also take out a shield scroll from the nearby chest.

Your task is to eliminate all enemies in the village. The best tactic is to move forward slowly. Start with dealing with the Archers on the two towers (2) near the portal and your starting positions. Eliminate them with Riflemen who can ignore defense bonus granted by staying in a fortification. Watch out, the enemy will quickly place new units in the towers.

Approach the enemies in the fortifications (3) to lure them out. After that, place your units in these fortifications and start fighting the enemies. Use your heroes to block narrow passages in the village (4) and to slow the enemies down. Sometimes, it is better to keep fighting with a unit consisting of a single soldier rather than eliminating it, giving space for a new unit with a full lineup. Eliminate Warlords first. Thanks to that, your infantry will have no problems with dealing with the rest of the Orcs.