You are looking for Karric, another Dwarven hero who will join your army. 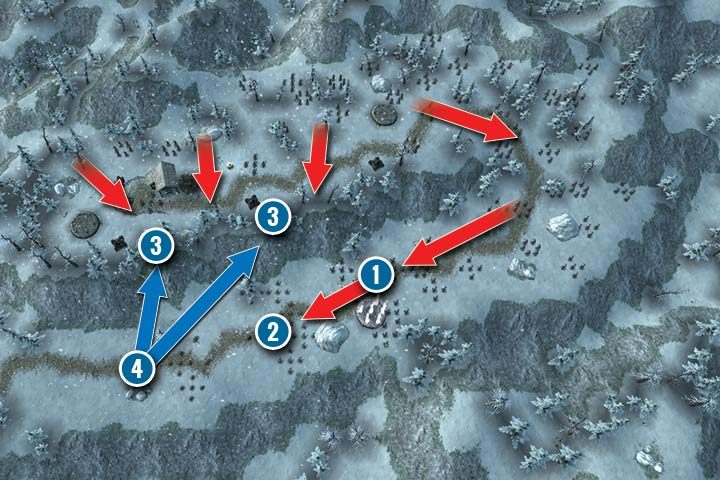 Karric has been surprised by Elven units - defeat them. Their units will move towards your positions. Use Karric's abilities to defeat them.

Karric can attack twice, and his range is 5 tiles. Both attacks are unique - you can't move after you perform the first attack. It makes enemies unable to move for 3 turns. The second attack deals both regular damage and inflicts acid effect which deals 20 damage for 4 turns. This allows you to adjust the battlefield to your needs. Karric can deal with a heavily-armored or fortified enemy. He can also stop a strong opponent or an entire group if he attacks a vulnerable target.

Order Karric and Thurvid to attack enemies on the road - only a few enemy units should reach your positions (1). Next, order Vahan and Dwarven Hammers to attack the Elven infantry (2). Archers, placed on the hills (3), will be a problem here. Use your Riflemen (4) to reduce their height advantage and the defense bonus received by standing in a forest. If you have problems, teleport additional Riflemen and Miners to help you with the enemy infantry. Eliminate ranged units fast. Otherwise, you will lose a lot of soldiers.