You finally meet with the miners. Sadly, they don't have good news for you. 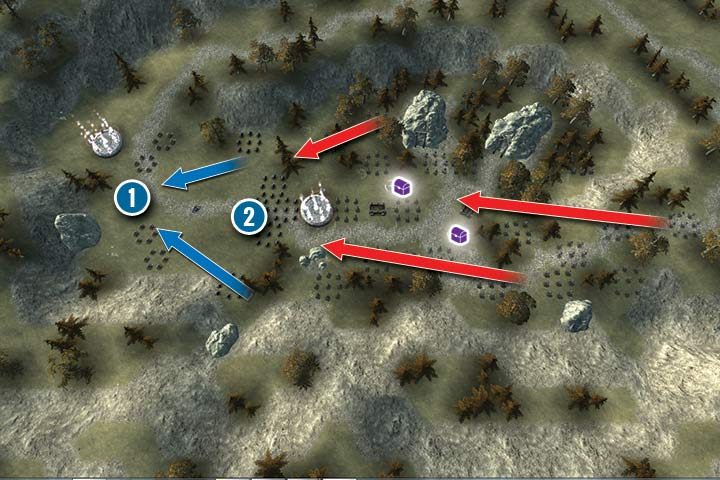 In this mission, you will face the Undead. Their army consists of two types of Skeletons - Wardens and Berserkers. The first unit is a typical heavily-armored infantry - has a lot of health points, thick armor, and high resistance to ranged attacks. However, this unit deals a small amount of damage. Berserkers are only resistant to melee attacks - they are extremely vulnerable to archers and marksmen. These units can deal a lot of damage.

You receive Miners, a light infantry unit. They don't deal much damage nor they have good armor (they are an equivalent of the Humans' Militia unit). However, they move faster than the majority of the units, and they have a special ability. Their every attack reduces an enemy's armor by half for a few turns. Thanks to them, you will be able to defeat heavily-armored units faster.

First, order your Miners to retreat and join the rest of your army (1). Once the first few enemy units get closer to your positions, attack them with one Miners unit to weaken them. After that, attack these enemies with your heroes or Axe throwers (2). If you aren't able to destroy units attacking the Miners, send Vahan to provoke the enemies to focus their attention on him. Thanks to that, you will save the Dwarves' lives. Remember, a Miners unit with even 1 soldier applies full armor weakening effect. Try to keep as many of them as possible alive.