In the meantime, Vahan, a Dwarven general, must deal with an unusual situation. 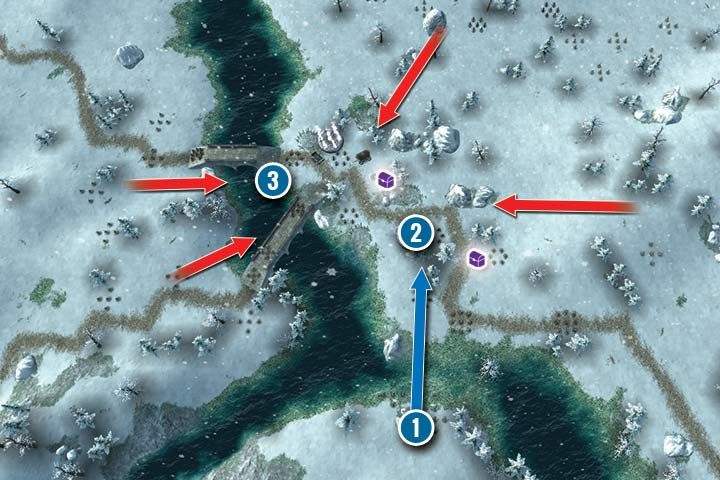 You control Vahan, another Dwarven hero. This is a very powerful character. He starts with 140 health points, a lot of armor, and 50 damage. His attack weakens a target greatly. In the next turn, the enemy will attack Vahan instead of focusing their attention on the allies.

You start in the south (1), near allied units. You control only Vahan and Dwarven Hammer unit. In the north, behind the river, you will find a few units of axe throwers (2). They have a great reach (5 tiles) and they can deal a lot of damage. These units are great for eliminating lightly-armored enemies. However, alone, they won't be able to win with numerous Greenskins. Place them in the nearby forests and fortifications. Send Vahan and his soldiers there as fast as you can.

Axe throwers will get attacked from 3 directions: from the north, the east, and the west. First, place your ranged units in the forests, and keep them away from the bridge. If you start fighting with the Goblins on the bridge (3), the mission will drag on. You need to reduce the enemy's numbers.

The enemy moves towards your positions - lure them to an open space. Use your infantry - they have great armor against both ranged and melee attacks. Make use of Vahan - order him to attack the most powerful units, or those who can be a threat to your ranged units.