The Greenskins' campaign ends with a battle for the town. This is also the final confrontation with Serith. 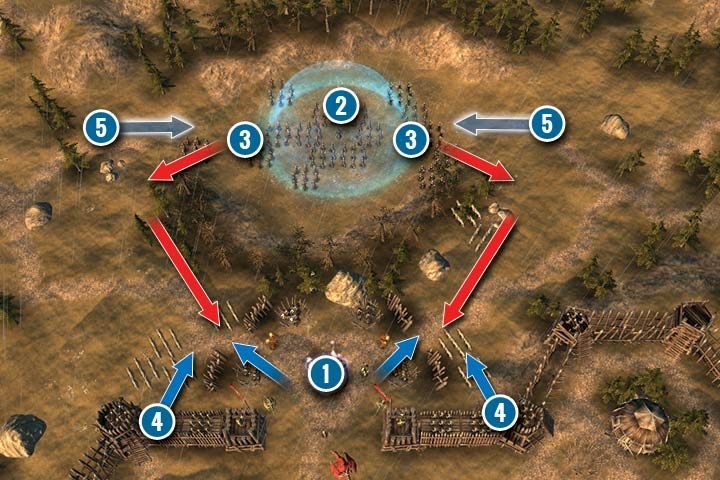 You start near the northern gate of Arradan (1). Your army is well-positioned and prepared for the large hostile army.

Serith starts a little to the north (2) - he is guarded with a special dome. He will also summon units for 7-8 turns. A new type of unit appears every turn - these enemies will move immediately towards your positions (3). After that, the dome will disappear making Serith vulnerable to attacks. Even though the situation may seem dire, you shouldn't have problems with eliminating enemies thanks to your positions. You can also use a small trick - send a weak unit, i.e. Wolves when you notice that Serith is about to summon allies. Some of the enemies will attack your units, or they will stand in one spot to take a shot. If at the end of the turn these units will stand near Serith, he will summon fewer allies. He will summon only as many units as there are empty tiles around him. This is also a good way of slowing down enemies attacking from a given direction.

Let the enemy come as close as possible and then eliminate them by using Battle Mages (4). As always, use Shamans to strengthen units fighting in the first line. Use all your heroes to counterattack. If you notice that one or two ranged units have started moving towards you, it means that it is time for you to attack. Eliminate all enemy units before you proceed with the final assault.

Gather up all your units outside of Serith's range (5) before you attack him. Order Shamans to cast Shields on all your heroes. You can also send other units but the enemy mage will attack all units within his range and immobilize them (excluding your heroes since they are immune to special statuses). If you attack with all 4 heroes, you will need two turns to defeat Serith.