The Greenskins are going back to their new headquarters, afraid of Serith's counterattack. 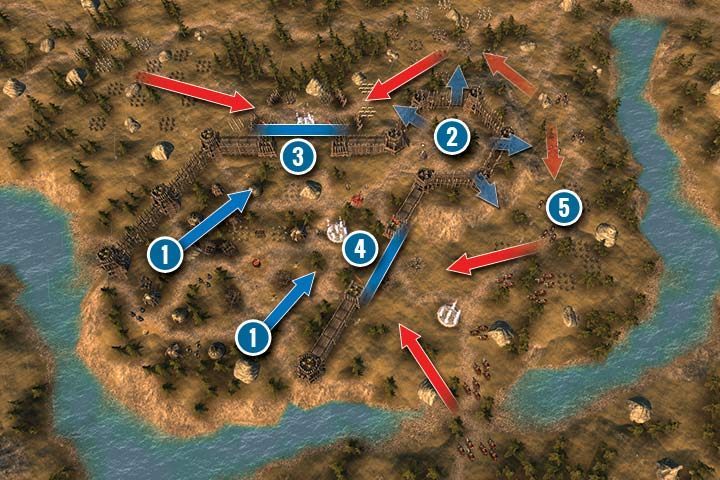 You meet Rogdul who is currently leading the defense. Once the second turn starts, you will be the leader. The enemy attacks from 4 directions, 2 groups per gate. The northern gate is easier to defend because the southern one is more revealed. The ranged units will cause you a lot of problems.

Order the raged units to leave the towers (western part of the town (1))- the enemy won't be near those buildings. Divide your troops into two groups and send them to both gates. The eastern part of the fort has a few towers with mages (2). These troops should always attack ranged units since they are the biggest threat to them and to your entire army.

The northern gate is a bit easier to defend (3). Here, you can find abatis, fortifications, a forest and a narrow passage going along your walls. This is the perfect place for defending yourself. Place your troops near the teleport by the gate. Summon or move the Shaman and the Wyvern from the southern gate to provide your other units with better support.

The southern gate is more challenging to defend (4). Cavalry is coming from one side, Crossbowmen are coming from another (5). Try to weaken as many of them as possible before they manage to eliminate your mages and start attacking the defenders near the gate. It is better to weaken Crossbowmen by limiting their number of units rather than eliminate them - a weakened unit will block their allies.

You need a Pikemen unit to defend the southern gate. Move either Guarg or Rogdul to this place. You will also need Shamans and ranged units. Strengthen your Pikemen so they will be able to fight with Cavalry for a longer period of time. If you have problems, move units from remaining towers, farther parts of the wall or from the northern gate. Remember, after defeating ranged enemies, you will have to counterattack to eliminate Hailstormers and Crossbowmen. Try to attack with larger groups of units and focus only on one side.