The Greenskins reach the supposed place where should meet Serith. 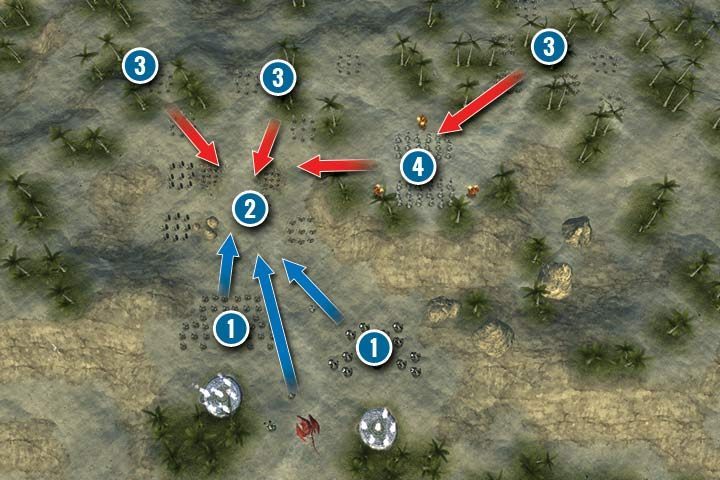 One of the most difficult missions provided that you didn't upgrade your army, teleport, and you don't want to use any potions. Golems and Skeletons are challenging enemies. All these units have almost 200 health points. Golems are also resistant to magic, and they deal 150 damage.

Your army is rather small (1) - a few melee units and one Mage of every race. Every hero here will be useful. The enemy has powerful units but they are scattered around the map. The first group is easy to defeat (2) - the majority of your units are nearby while the enemies have only just started moving towards your positions (3). Guarg should always attack at least 2 units. Vulpis main role is to weaken the most dangerous enemies that are farther away. Remember to order Vulpis to go back to your other units after every attack. Use the dragon to finish off the weakest enemy unit - do that in such a way that would spread the fire to adjacent units. Try to teleport ranged units, preferably Shamans or Battle Mages. You need to maximize your damage - these units are the best for that.

The key to success here is to fight as fewer enemies as possible. Try to isolate enemy units and use fortifications (2) and forests. This is especially important when you are fighting with Golems. Almost all units in your army will be killed with a Golem's single attack (4) - that is why it is important to focus your army on the same target. You need a Shaman to strengthen your units fighting in the first line. If you have enough gold, think about purchasing a Shield scroll or a scroll that increases attack. Lightning and Mind Control scrolls will also be useful here. If you notice that the enemy is attacking with more units, fall back, find a few good spots, and divide enemies into smaller groups.